No. 203 Squadron RAF was originally formed as No. 3 Squadron Royal Naval Air Service. It was renumbered No. 203 when the Royal Air Force was formed on 1 April 1918.

The squadron was formed as No. 3 Squadron RNAS at Eastchurch in February 1914.[1] In March 1915, the squadron, under the command of Commander Charles Samson, moved to the island of Tenedos, and began operating 18 aircraft in support of the Gallipoli Campaign. In the first weeks of the campaign they took over 700 photographs of the peninsula, and conducted other ground support tasks including spotting for naval gunfire, and reporting the movements of Ottoman troops. On 21 June 1915, the squadron became No. 3 Wing RNAS and was moved to Imbros.[2] On 19 November, during a raid against a railway junction near the Maritsa River in Bulgaria, Squadron Commander Richard Bell Davies won the Victoria Cross for landing to rescue a pilot who had been shot down, in the face of intense enemy fire. The squadron returned to the UK at the end of 1915, and was disbanded.[1]

A new No. 3 Squadron was formed at Saint Pol on 5 November 1916 from elements of No. 1 Wing RNAS. It then served as a fighter squadron on the Western Front. Among the numerous types of aircraft it was equipped with were the Nieuport 17, Nieuport 21, and Sopwith Pup, followed later by the Sopwith Camel.[3]

Eleven of the squadron's 23 aces were Canadian. The squadron claimed about 250 aerial victories during World War I.[4]

On 21 January 1920, the squadron disbanded. In 1929 the squadron reformed as a reconnaissance squadron operating Supermarine Southampton flying boats. 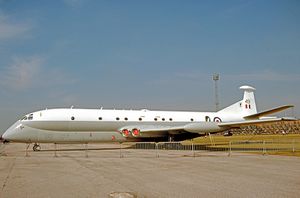 HS Nimrod MR.1 of No. 203 Squadron wearing the unit's badge on its fin in 1977 when displayed at Royal Air Force Finningley.

The squadron returned to the UK in 1947 and re-equipped with Avro Lancasters. In July 1954, the squadron was flying Neptune MR.2s from RAF Topcliffe, along with No.s No. 36 and No. 210 Squadrons as part of No. 19 Group, RAF Coastal Command.[6] The squadron remained a Maritime Reconnaissance squadron for the remainder of its existence operating Avro Shackletons and then Hawker Siddeley Nimrods from RAF Luqa between July 1971 and December 1977.[7] The squadron disbanded on 31 December 1977 at RAF Luqa in Malta, by which time it was part of No. 18 Group within RAF Strike Command.[8]