No. 224 Squadron RAF was a Royal Air Force squadron that saw service in both the First and Second World Wars. 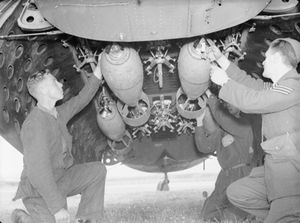 Securing bombs in a 224 Squadron Hudson at RAF Leuchars 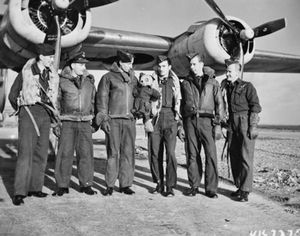 On 1 February 1937, the squadron reformed at Manston, when No. 48 Squadron was renumbered. It then moved to Boscombe Down and was equipped with Avro Ansons for reconnaissance duties. In August 1938 the squadron moved to Leuchars, and from May 1939 began re-equipping with the Lockheed Hudson.

The squadron reformed on 1 March 1948 at RAF Aldergrove, equipped with the Handley Page Halifax. In 1951 it re-equipped with the Avro Shackleton, which it operated from RAF Gibraltar from August 1951,[1] until disbanding on 31 October 1966. During this period its main tasks were NATO maritime surveillance as well as search and rescue duties within the Gibraltar Maritime Area. This area covered a large part of the eastern Atlantic as well as the western Mediterranean.[2]