No gods, no masters

From Infogalactic: the planetary knowledge core
Jump to: navigation, search
For the Criminal album, see No Gods No Masters. 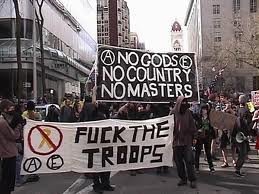 Anarchists marching with the 'No Gods, No Masters' slogan on a banner.

No gods, no masters is an anarchist and labour slogan. Its English origin comes from a pamphlet handed out by the Industrial Workers of the World during the 1912 Lawrence Textile Strike.[1] The phrase is derived from the French slogan "Ni dieu ni maître!" (literally 'Neither God nor master') coined by the socialist Louis Auguste Blanqui in 1880, when he published a journal by that name.[2] In Joseph Conrad's novel The Secret Agent, first published in 1907, the anarchist character The Professor says: "My device is: No God! No master." (Joseph Conrad, The Secret Agent, Pan Classics, 1975 edition, p. 228)

Margaret Sanger's feminist pamphlet used the slogan as a subtitle in 1914.

The French phrase appears twice in Friedrich Nietzsche's 1886 work Beyond Good and Evil. It appears first in Section 22, in a critique of the notion that nature dictates a morality of equality before the law. It appears again in section 202 where he identifies it with the anarchists and as indicative of their "herd" mentality, which he is criticizing.[3]

In 1914, Margaret Sanger launched The Woman Rebel, an eight-page monthly newsletter which promoted contraception using the slogan "No Gods, No Masters". Sanger insisted that every woman was the mistress of her own body.[4]

"Women without superstition: No gods – No Masters!" by Annie Laurie Gaylor is a collection of writings by women freethinkers during the 19th and 20th century.[5]

Today the slogan continues to find use in anarchist politics. An anthology of anarchist writing was collected under the title "No Gods, No Masters: An Anthology of Anarchism".[6]

The slogan has also found use in musical cultures, largely associated with the punk movement. But it was used in the first place in the French chanson field, by the anarchist poet and singer-songwriter Léo Ferré who released the song Ni Dieu ni maître on an EP in 1965.[7] This song, metaphorically depicting the French death penalty procedure, ends with these verses: "This slogan that breaks all the rules / Made for the benefit of fools / Rejecting all authority / Unless respecting liberty / This principle of human rights / I recommend it for your fights / We shall proclaim it to the last / No God no master!".

The slogan was also chosen as a song title by the English crust punk/heavy metal band Amebix on their EP Who's the Enemy,[8] Swedish death metal band Arch Enemy on their album Khaos Legions.,[9][10] and Chicago-based hardcore band Harm's Way, who released an EP entitled 'No Gods, No Masters' in 2010.[11]

The slogan was rephrased as No Gods, No Managers, as an album title by American crust punk band Choking Victim.[12]

"No Gods, No Masters" is one of four possible final quests in Fallout: New Vegas.[13]