Nobody Knows the Trouble I've Seen 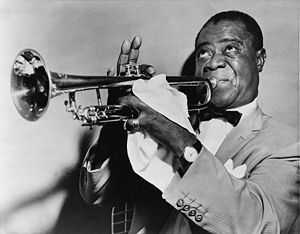 Louis Armstrong recorded his own cover of this song

"Nobody Knows the Trouble I've Seen" is a spiritual song that originated during the period of slavery but was not published until 1867. The song is well known and many cover versions of it have been done by artists such as Marian Anderson, Lena Horne, Louis Armstrong, Harry James, Paul Robeson, Sam Cooke among others.[1] Anderson had her first successful recording with a version of this song on the Victor label in 1925.[2] Horne recorded a version of the song in 1946.[3] Deep River Boys recorded their version in Oslo on August 29, 1958. It was released on the extended play Negro Spirituals Vol. 1 (HMV 7EGN 27). The song was arranged by Harry Douglas.

It is one of the five spirituals included in the oratorio A Child of Our Time, first performed in 1944, by the classical composer Michael Tippett (1905–98).

Nobody knows my sorrow

On the late 19th century African-American music began to appear in classical music art forms, in arrangements made by black composers such as Samuel Coleridge-Taylor, Henry Thacker Burleigh and James Rosamond Johnson. Johnson made an arrangement of "Nobody Knows the Trouble I See" for voice and piano in 1917, when he was directing the New York Music School Settlement for Colored People.[6]

American violinist Maud Powell was the first white solo concert artist to perform classical arrangements of spirituals in concerts, and that is where she also interpreted classical and contemporary pieces by composers like Dvorak and Sibelius. After Powell's suggestion, J. R. Johnson made an arrangement of "Nobody Knows the Trouble I See" for piano and violin in 1919. Powell got to play this in a fall program she organized, and then she died that November.[6] Recent interpretations of the classical version of this spiritual have been made by a Chicago violinist, Rachel Barton Pine, who has been working along the lines of Powell's legacy.[7]

A line of the song is used in the Dexter's Laboratory episode "Dee Dee Be Deep".

Part of the song was sung by Princess Vespa in the cult movie Spaceballs.

A line of the song is also sung by Geoff Ramsey in the third Season of the popular video game web-series, Red vs. Blue.

The song was sung in the Recess episode "The Voice". Actor and singer Robert Goulet sings it as Mikey.

In the Bonanza episode "The Smiler", a portion is sung by Herschel Bernardi (Jud), and Hy Terman (Arthur Bolling).

Part of the song was sung in the first verse of "Monument" by A Day To Remember.

In the film Police Academy 4: Citizens on Patrol (1987), Lt Proctor sings this song in prison while running a metal cup along the bars.

The line "Nobody Knows the Trouble I've Seen" is used to end the second verse of "You Know What They Do to Guys Like Us in Prison" by My Chemical Romance.

In The Lion King, Zazu briefly sings the song to Scar while under captivity.

The song can be heard on a radio in Silent Hill: Downpour.

A quote from the song is used as the opening quote of "Nobody Knows the Trouble I've Seen" (Episode 63) of the TV show Grimm.

In his Jazz album of 1978, Ry Cooder added the couplet "Nobody knows the trouble I see, Nobody knows but me" based on the song, as an opening to his version of Nobody, originally composed and sung by Bert Williams.

Line 1 & 2 was sung in the show called Tyler Perry's House of Payne in Volume 9.

In the Wee Sing film "Wee Sing in the Big Rock Candy Mountains", the song is sung by Little Bunny Foo Foo to express his sorrow after he is turned into a goon by the Good Fairy for repeatedly bopping the Meecy Mice.