A nonfinite verb is any of several verb forms that are not finite verbs; that is, they cannot serve as the root of an independent clause. Nonfinite verbs found in English typically are infinitives, participles and gerunds. (They sometimes are called verbals—although that term has traditionally applied only to participles and gerunds.) Additional nonfinite forms found in some other languages include converbs, gerundives and supines.

Nonfinite verbs typically are not inflected by grammatical tense; and they present little inflection for other grammatical categories as well.[1] Generally, they also lack a subject dependent. One or more nonfinite verbs may be associated with a finite verb in a finite clause, composing the elements of a verb catena, or verb chain.

Because English to a large extent lacks inflectional morphology, the finite and nonfinite forms of a verb may appear the same in a given context. In such a case, the environment surrounding the verb must be examined to determine whether it is finite or nonfinite.

The following sentences each contain one finite verb (underlined) and multiple nonfinite verbs (in bold):

The proposal has been intensively examined today.
What did they want to have done about that?
Someone tried to refuse to accept the offer.
Coming downstairs, she saw the man running away.
I am trying to get the tickets.

In the above sentences, been, examined and done are past participles, want, have, refuse, accept and get are infinitives, and coming, running and trying are present participles (for alternative terminology, see the sections below).

In languages like English that have little inflectional morphology, certain finite and nonfinite forms of a given verb are often identical, e.g.

Despite the fact that the verbs in bold have the same outward appearance, the first in each pair is finite and the second is nonfinite. To distinguish the finite and nonfinite uses, one has to consider the environments in which they appear. Finite verbs in English usually appear as the leftmost verb in a verb catena.[2] For details of verb inflection in English, see English verbs.

Each of these nonfinite forms appears in a variety of environments.

The infinitive of a verb is considered the "base" form; it is the form that is listed in dictionaries. Infinitives in English appear in verb catenae where they are introduced by an auxiliary verb or by a certain limited class of main verbs. They are also often introduced by a main verb followed by the particle to (as illustrated in the examples below). Further, infinitives introduced by to can function as noun phrases, or even as modifiers of nouns. The following table illustrates these environments:

Participles in English can be divided along two lines: according to aspect (progressive vs. perfect/perfective) and voice (active vs. passive). The following table illustrates these distinctions:

Participles appear in a variety of environments. They can appear in periphrastic verb catenae, in which case they help form the main predicate of a clause (as illustrated with the trees below), or they can appear essentially as an adjective modifying a noun. The form of a given perfect or passive participle is strongly influenced by the status of the verb at hand. The perfect and passive participles of strong verbs in Germanic languages are irregular (e.g. driven); their form is idiosyncratic. The perfect and passive participles of weak verbs, in contrast, are regular; they are formed with the suffix -ed (e.g. fixed, supported, opened).

A gerund is a verb form that appears in positions that are usually reserved for nouns. In English, a gerund has the same form as a progressive active participle (see above), ends in -ing. Gerunds typically appear as subject or object noun phrases, or even as the object of a preposition:

Often distinguishing between a gerund and a progressive active participle is not easy; the line between the two nonfinite verb forms is not clear.

Nonfinite verbs in other languages

The nonfinite verb forms in Modern Greek are identical to the third person of the dependent (or aorist subjunctive) and it is also called the aorist infinitive. It is used with the auxiliary verb έχω (to have) to form the perfect, pluperfect, and future perfect tenses.

Nonfinite verbs in theories of syntax

For an overview of dependency grammar structure in modern linguistic analysis, three example sentences are shown. The first sentence, The proposal has been intensively examined, is described as follows.

The three verbs together form a chain, or verb catena (in purple), which functions as the predicate of the sentence. The finite verb has is inflected for person and number, tense, and mood —here, respectively: third person singular, present tense, indicative. The nonfinite verbs been and examined are, except for tense, neutral across these categories and are not inflected otherwise. The subject, proposal, is a dependent of the finite verb has, which is the root (highest word) in this verb catena. The nonfinite verbs lack a subject dependent.

The verb catena (in purple) contains four verbs (three of which are nonfinite) and the particle to, which introduces the infinitive have. Again, the one finite verb, did, is the root of the entire verb catena and the subject, they, is a dependent of the finite verb.

The third sentence has the following dependency structure: 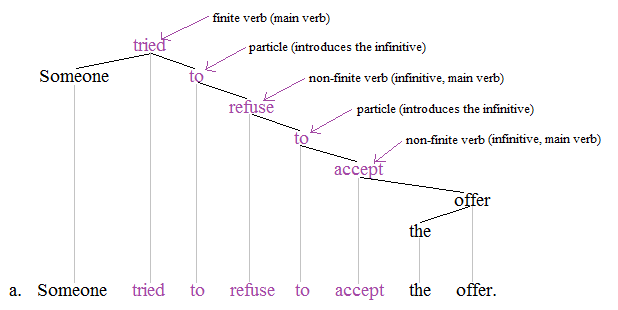 Here the verb catena contains three main verbs, which means there are three separate predicates in this one verb catena.