From Infogalactic: the planetary knowledge core
(Redirected from Nonconformism)
Jump to: navigation, search
"Non-conformists" redirects here. For the 1930s French movement, see Non-conformists of the 1930s.

"Nonconformist" or "Non-conformist" was a term used in England and Wales after the Act of Uniformity 1662 to refer to a Protestant Christian who did not "conform" to the governance and usages of the established Church of England. English Dissenters (such as Puritans) who violated the Act of Uniformity 1559 may retrospectively be considered Nonconformists, typically by practising or advocating radical, sometimes separatist, dissent with respect to the established state church. By the late 19th-century the term included Reformed Christians (Presbyterians and Congregationalists), Baptists, and Methodists, among other groups. Historically, Nonconformists were restricted from many spheres of public life. 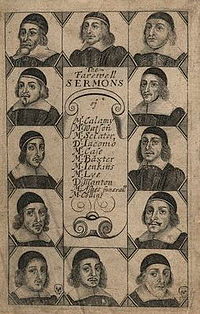 Title page of a collection of Farewell Sermons preached by Non-conformist ministers ejected from their parishes in 1662.

The Act of Uniformity 1662 required the use of all the rites and ceremonies in the Book of Common Prayer in church services.[1] It also required episcopal ordination for all ministers. As a result, nearly 2,000 clergymen were "ejected" from the established church for not conforming to the provisions of the Act.[1] Subsequently, a Nonconformist was an English subject belonging to any non-Anglican church or to a non-Christian religion. A person who also advocated religious liberty may be more narrowly considered as such.[2]

The term "dissenter" came into use particularly after the Act of Toleration (1689), which exempted nonconformists who had taken the oaths of allegiance from penalties for non-attendance at the services of the Church of England.[4]

The different Nonconformists campaigned together against the Test and Corporation Acts that had been passed by Parliament in the 17th century.[5] These Acts excluded Nonconformists from holding civil or military office. Attendance at an English university had required conformity to the Church of England before University College London (UCL) was founded, compelling Nonconformists to fund their own Dissenting Academies privately.

The Tories in the House of Commons tended to be in favour of these Acts and so the Nonconformist cause was linked closely to the Whigs, who advocated civil and religious liberty.[5] After the Test and Corporation Acts were repealed in 1828, all the Nonconformists elected to Parliament were Liberals.[5]

Nonconformists were angered by the Education Act 1902, which integrated denominational schools into the state system and provided for their support from taxes. John Clifford formed the National Passive Resistance Committee and by 1906 over 170 Nonconformists had gone to prison for refusing to pay school taxes.[7][8] They included 60 Primitive Methodists, 48 Baptists, 40 Congregationalists, and 15 Wesleyan Methodists.

Today, Protestant churches independent of the Anglican Church of England or the Presbyterian Church of Scotland are often called "free churches", meaning they are free from state control. This term is used interchangeably with "Nonconformist". In Scotland, the Anglican Scottish Episcopal Church is considered Nonconformist (despite its English counterpart's status) and in England, the United Reformed Church, principally a union of Presbyterians and Congregationalists, is in a similar position.