Norbert Elias (German: [eˈliːas]; 22 June 1897 – 1 August 1990) was a German sociologist of Jewish descent, who later became a British citizen. He is especially famous for his theory of civilizing (and decivilizing) processes.

Elias was born on 22 June 1897 in Breslau (today: Wrocław) in Prussia's Silesia Province to Hermann and Sophie Elias. His father was a businessman in the textile industry. After passing the abitur in 1915 he volunteered for the German army in World War I and was employed as a telegrapher, first at the Eastern front, then at the Western front. After suffering a nervous breakdown in 1917, he was declared unfit for service and was posted to Breslau as a medical orderly. The same year, Elias began studying philosophy, psychology and medicine at the University of Breslau, in addition spending a term each at the universities of Heidelberg (where he attended lectures by Karl Jaspers) and Freiburg in 1919 and 1920. He quit medicine in 1919 after passing the preliminary examination (Physikum). To finance his studies after his father's fortune had been reduced by hyperinflation, he took up a job as the head of the export department in a local hardware factory 1922. In 1924, he graduated with a doctoral dissertation in philosophy entitled Idee und Individuum ("Idea and Individual") supervised by Richard Hönigswald, a representative of Neo-Kantianism. Disappointed about the absence of the social aspect from Neo-Kantianism, which had led to a serious dispute with his supervisor about his dissertation, Elias decided to turn to sociology for his further studies.

During his Breslau years, until 1925, Elias was deeply involved in the German Zionist movement, and acted as one of the leading intellectuals within the German-Jewish youth movement "Blau-Weiss" (Blue-White). During these years he got acquainted with other young Zionists like Erich Fromm, Leo Strauss, Leo Löwenthal and Gershom Scholem. In 1925, Elias moved to Heidelberg, where Alfred Weber accepted him as a candidate for a habilitation (second book project) on the development of modern science, entitled Die Bedeutung der Florentiner Gesellschaft und Kultur für die Entstehung der Wissenschaft (The Significance of Florentine Society and Culture for the Development of Science). In 1930 Elias chose to cancel this project and followed Karl Mannheim to become his assistant at the University of Frankfurt. However, after the Nazi take-over in early 1933, Mannheim's sociological institute was forced to close. The already submitted habilitation thesis entitled Der höfische Mensch ("The Man of the Court") was never formally accepted and not published until 1969. In 1933, Elias fled to Paris. His elderly parents remained in Breslau, where his father died in 1940; his mother was deported to Auschwitz, where she was probably killed in 1941. 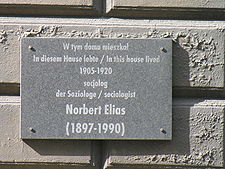 The plaque for Norbert Elias in Wrocław

In 1939, he met up with his former supervisor Mannheim at the London School of Economics, where he obtained a position as Senior Research Assistant. In 1940, the LSE was evacuated to Cambridge, but when an invasion of Britain by German forces appeared imminent, Elias was detained at internment camps in Liverpool and on the Isle of Man for eight months, on account of his being German – an "enemy alien". During his internment he organized political lectures and staged a drama he had written himself, Die Ballade vom armen Jakob (The Ballad of Poor Jacob) (eventually published in 1987).

Upon his release in 1941, he returned to Cambridge. Towards the end of the war, he worked for British intelligence, investigating hardened Nazis among German prisoners of war (see his essay "The breakdown of civilisation", in Studies on the Germans). He taught evening classes for the Workers' Educational Association (the adult education organization), and later evening extension courses in sociology, psychology, economics and economic history at the University of Leicester. He also held occasional lectureships at other institutions of higher learning. In collaboration with a friend from Frankfurt days, the psychoanalyst S. H. Foulkes, he laid the theoretical foundations of Group Analysis, an important school of therapy, and co-founded the Group Analytic Society in 1952. He himself trained and worked as a group therapist.

In 1954 – at the very late age of 57 – he at last gained his first secure academic post, at University College Leicester (which soon became the University of Leicester), first as Lecturer and later as Reader in Sociology. Along with his friend Ilya Neustadt, he made a major contribution to the development of the University's Department of Sociology, which became one of the largest and most influential departments in the United Kingdom. He retired in 1962, but continued to teach graduate students in Leicester until the mid-1970s. Among subsequently famous sociologists whom Neustadt and Elias appointed as colleagues at Leicester, were John H. Goldthorpe, Anthony Giddens, Martin Albrow, Sheila Allen, Joe and Olive Banks, Richard Brown, Mary McIntosh, Nicos Mouzelis and Sami Zubaida and Keith Hopkins. (Hopkins was subsequently Professor of Ancient History at Cambridge: his appointment to teach sociology in Leicester is one sign of the very broad conception Elias and Neustadt had of the discipline of sociology.) Students in the department included John Eldridge, Chris Bryant, Chris Rojek, Paul Hirst, Graeme Salaman and Bryan Wilson. From 1962 to 1964, Elias taught as Professor of Sociology at the University of Ghana in Legon near Accra. After his return to Europe in 1965, he spent much time as visiting professor in various German and Dutch universities, and from about 1977 based himself in Amsterdam. His reputation and popularity grew immensely after the republication of The Civilising Process in 1969. From 1978 to 1984 he worked at the Center for Interdisciplinary Research at the University of Bielefeld. Elias was the first ever laureate of both the Theodor W. Adorno Prize (1977) and the European Amalfi Prize for Sociology and Social Sciences (1987). Outside his sociological work he always also wrote poetry.

Elias' theory focused on the relationship between power, behavior, emotion, and knowledge over time. He significantly shaped what is called process or figurational sociology. Due to historical circumstances, Elias had long remained a marginal author, until being rediscovered by a new generation of scholars in the 1970s, when he eventually became one of the most influential sociologists in the history of the field. Interest in his work can be partly attributed to the fact that his concept of large social figurations or networks explains the emergence and function of large societal structures without neglecting the aspect of individual agency. In the 1960s and 1970s, the overemphasis of structure over agency was heavily criticized about the then-dominant school of structural functionalism.

Elias' most famous work is Über den Prozess der Zivilisation, published in English as The Civilizing Process (or, more accurately in the Collected Works edition – see below – as On the Process of Civilisation). Originally published in German, in two volumes, in 1939, it was virtually ignored until its republication in 1969, when its first volume was also translated into English. The first volume traces the historical developments of the European habitus, or "second nature," the particular individual psychic structures molded by social attitudes. Elias traced how post-medieval European standards regarding violence, sexual behaviour, bodily functions, table manners and forms of speech were gradually transformed by increasing thresholds of shame and repugnance, working outward from a nucleus in court etiquette. The internalized "self-restraint" imposed by increasingly complex networks of social connections developed the "psychological" self-perceptions that Freud recognized as the "super-ego." The second volume of The Civilizing Process looks into the causes of these processes and finds them in the increasingly centralized Early Modern state and the increasingly differentiated and interconnected web of society.

When Elias' work found a larger audience in the 1960s, at first his analysis of the process was misunderstood as an extension of discredited "social Darwinism," the idea of upward "progress" was dismissed by reading it as consecutive history rather than a metaphor for a social process.

Elias came to write both in English and German. Almost all his work on the sociology of knowledge and the sciences (much of which would more conventionally be called "philosophy of science") was written in English. And so was his seminal work in the sociology of sport, collected in The Quest for Excitement, written by Norbert Elias with Eric Dunning, and published in 1986. Bielefeld University's Center for Sociology of Development in 1984 invited Norbert Elias to preside over a gathering of a host of his internationally distinguished fellows who in turn wanted to review and discuss Elias' most interesting theories on civilising processes in person.

In the same year, Elias established the Norbert Elias Foundation to administer his legacy after his death. The current members of the board of the foundation are Johan Goudsblom (Amsterdam), Hermann Korte (Münster) and Stephen Mennell (Dublin).

One of the most curious features of Elias's career is that, until he retired from the University of Leicester in 1962, he had published only one book, Über den Prozess der Zivilisation, and no more than a handful of articles. And yet, by the time of his death in 1990, he had published 15 books and something approaching 150 essays. He had always written a great deal, but found it very difficult ever to be satisfied with the results, and was very reluctant to release his work for publication. Still more curious, although he was such a perfectionist in his writing, he could rarely be persuaded to undertake such mundane tasks as reading and correcting the proofs. Thus, although his German works were well translated into English (for the most part by Edmund Jephcott), the original English editions contain many errors that could have been corrected by thorough proof-reading. In the early twenty-first century, therefore, the Norbert Elias Foundation entered into agreement with UCD Press, Dublin, to publish new scholarly editions of Elias's work, running to 18 volumes.

The Collected Works of Norbert Elias in English

The new editions of Elias's works have been carefully revised, cross-referenced and annotated (with notes especially about many historical people and events to which Elias makes reference), with a view to making them far more accessible to the reader. Especially important are the three volumes of Elias's collected essays, many of which have not previously been published in English – or were published in such a scattered way or in obscure places that they were hitherto little known. (Other essays can also be found in Early Writings, Mozart and other volumes.)

The 18 volumes are as follows:

4 The Established and the Outsiders, edited by Cas Wouters (Dublin: UCD Press, 2008).

6 The Loneliness of the Dying and Humana Conditio, edited by Alan and Brigitte Scott (Dublin: UCD Press, 2009).

7 Quest for Excitement: Sport and Leisure in the Civilising Process, by Norbert Elias and Eric Dunning, edited by Eric Dunning (Dublin: UCD Press, 2008).

14 Essays I: On the Sociology of Knowledge and the Sciences, edited by Richard Kilminster and StephenMennell (Dublin: UCD Press, 2009).

The Genesis of the Naval Profession, edited by René Moelker and Stephen Mennell (Dublin: UCD Press, 2007).

Books (in chronological order, by date of original publication):