From Infogalactic: the planetary knowledge core
(Redirected from Nord-Pas-de-Calais-Picardy)
Jump to: navigation, search

Hauts-de-France[1] (French pronunciation: ​[o d(ə) fʁɑ̃s], translates to "Upper France" or "the heights of France" in English), officially still Nord-Pas-de-Calais-Picardie, is a new Region of France created by the territorial reform of French Regions in 2014 by the merger of Nord-Pas-de-Calais, and Picardy. The new region came into existence on 1 January 2016, after the regional elections in December 2015.[2]

On 14 March 2016, well ahead of the 1 July deadline, the Regional council decided on Hauts-de-France as the region's permanent name,[1] now to be confirmed by the Conseil d'Etat by 1 October 2016.[4]

File:Nord-Pas-de-Calais-Picardie.svg
Map of the new region with its five départements, colored according to the historical provinces as they existed until 1790.
Picardy
Île-de-France
Artois
French Flanders
French Hainaut
fr (Cambrai)
Champagne
Other 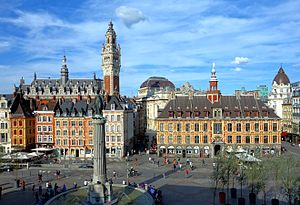 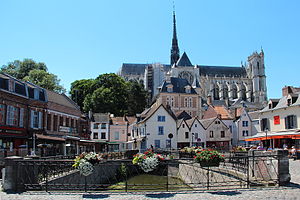