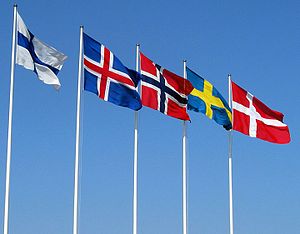 Nordic flags, from left to right: the flags of Finland, Iceland, Norway, Sweden and Denmark, respectively. 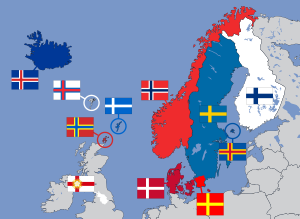 The term Nordic Cross flag describes certain flags bearing the design of the so-called Nordic or Scandinavian cross, a cross symbol in a rectangular field, with the center of the cross shifted towards the hoist.

While the design originates as a Christian cross, and as such ultimately derives from 13th-century designs in use during the Crusades,[2][3][4] the characteristic shift of the center to the hoist side is early modern, first described the Danish civil ensign (Koffardiflaget) for merchant ships in a regulation of 11 June 1748, which specified the shift of the cross center towards the hoist as "the two first fields must be square in form and the two outer fields must be 6/4 lengths of those". The Danish design was adopted for the flags of Norway (civil ensign 1821) and Sweden (1906), both derived from a common ensign used during the Union between Sweden and Norway 1818–1844, Iceland (1915) and Finland (1917); some of the subdivisions of these countries used this as inspiration for their own flags. The Norwegian flag was the first Nordic cross flag with three colours. All Nordic flags may be flown as gonfalons as well.[citation needed]

Flags of the Nordic countries

Note that most of these flags are historical or have not been officially adopted and their use remains limited.

Some of the flags in this list do not have official status. Also, note that flag proportions may vary between the different flags and sometimes even between different versions of the same flag.

Nordic cross flags outside of the Nordic region

Nordic flags in Germany were historically used to allude to the nation's Germanic heritage and "Nordic" origins. Nordic flag designs very similar to Denmark's, Sweden's, and Norway's national flags were proposed as Germany's national flags in both 1919 and 1948, after World War I and World War II, respectively. Today, the Nordic cross is a feature in some city and district flags or coats of arms.

A number of modern flag proposals for localities in the United Kingdom (primarily Scotland) are based on Nordic cross designs, intended to reflect the "Scandinavian heritage" introduced to the British Isles during the Viking Age.