The Nordic Stone Age refers to the Stone Age of Scandinavia.

As the ice receded, reindeer grazed on the plains of Denmark and southernmost Sweden, while along the coast of western Sweden, marine resources were exploited. This was the land of the Ahrensburg culture and preceding Hamburg culture, tribes who hunted over territories 100,000 km² vast and lived in teepees on the tundra. On this land there was little forest but arctic white birch and rowan, but the taiga slowly appeared.

In the 7th millennium BCE, the climate in Scandinavia was warming as it transitioned from the former Boreal age to the Atlantic period. Reindeer and their hunters had already migrated and inhabited the lands of northern Scandinavia, and forests had established. A culture called the Maglemosian culture lived in the areas of Denmark and southern Sweden. To the north, in Norway and along the coast of western Sweden, the Fosna-Hensbacka culture was living mostly in changing seasonal camps along the shores and close to the now thriving forests. Utilizing fire, boats and stone tools, these Stone Age tribal cultures managed to survive in northern Europe. The northern hunter-gatherers followed the herds and the salmon runs, moving south during the winters, moving north again during the summers. These early peoples followed cultural traditions similar to those practiced throughout other regions in the far north – areas including modern Finland, Russia, and across the Bering Strait into the northernmost strip of North America (comprising portions of today's Alaska and Canada).

During the 6th millennium BCE, the climate of Scandinavia was generally warmer and more humid than today and the southern regions was clad in lush temperate broadleaf and mixed forests. Large animals like aurochs, wisent, moose and red deer roamed freely in the forests and was hunting game for tribes of what we now call the Kongemose culture. Like their predecessors, the Kongemose tribes also hunted marine animals such as seals and fished in the rich shallow waters. North of the Kongemose people, lived other hunter-gatherers in most of southern Norway and Sweden, now dubbed the Nøstvet and Lihult cultures, descendants of the Fosna and Hensbacka cultures. By the end of the 6th millennium BCE, as the sea levels rose gradually, these northerly tribal cultures continued their way of life, while the Kongemose culture was replaced by the Ertebølle culture and adapting to the climatic changes affecting their low lying southern regions more severely.[1] 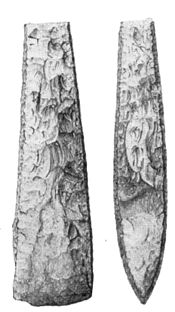 "Thick-neck axe" from Närke, a flintstone axe characteristic of both the Funnelbeaker and the Pitted Ware cultures.
Main article: Neolithic

During the 5th millennium BCE, the Ertebølle people learned pottery from neighbouring tribes in the south, who had begun to cultivate the land and keep animals. Soon, they too started to cultivate the land and, ca 4000 BCE, they became part of the megalithic Funnelbeaker culture. During the 4th millennium BCE, these Funnelbeaker tribes expanded into Sweden up to Uppland. The Nøstvet and Lihult tribes learned new technology from the advancing farmers, but not agriculture, and became the Pitted Ware cultures, towards the end of the 4th millennium BCE. These Pitted Ware tribes halted the advance of the farmers and pushed them south into south-western Sweden, but some say that the farmers were not killed or chased away, but that they voluntarily joined the Pitted Ware culture and became part of them. At least one settlement appears to be mixed, the Alvastra pile-dwelling.

It is not known what language these early Scandinavians spoke, but towards the end of the 3rd millennium BCE, they were overrun by new tribes who many scholars think spoke Proto-Indo-European, the Battle-Axe culture. This new people advanced up to Uppland and the Oslofjord, and they probably provided the language that was the ancestor of the modern Scandinavian languages. These new tribes were individualistic and clearly patriarchal with the battle axe as a status symbol. They were cattle herders and with them most of southern Scandinavia entered the Neolithic. However, soon a new invention would arrive, that would usher in a time of cultural advance in Scandinavia, the Bronze Age.