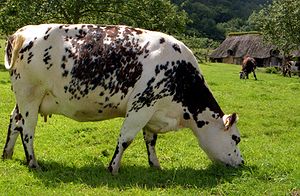 Normande cattle are a breed from the Normandy region in North West France. They are claimed to be descended from cattle imported by Viking settlers.[1]

The breed is dual purpose for milk and beef, with the accent on milk production. The milk is particularly suitable for cheese production. The animals are chestnut-brown pied or black pied. The head is white and the eyes are darkly "spectacled" ("lunettes"). Cows average 700 kg in weight and are approximately 140 cm tall. Bulls are typically 1,100 kg in weight and 152 cm tall.

The Normande cow breed has been a popular export of France since the late 1800s to various locations, most notably South America, Brazil, Uruguay Venezuela, Colombia, Paraguay and Ecuador. Now, Normande cows are found on every continent throughout the world and countries such as the United States, Japan and Australia have started breeding their own. The European counterpart to this trend is found in Belgium, Switzerland, Ireland and Great Britain. The second largest populations of Normande cows outside France reaches numbers of nearly 1.2 million. This colony isn't compacted, but as a whole are located in Colombia, both counting cross breeds and purebred normande cows.[2]