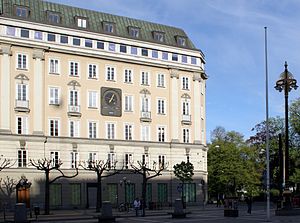 The Norrmalmstorg robbery was a bank robbery and hostage crisis best known as the origin of the term Stockholm syndrome. It occurred at the Norrmalmstorg square in Stockholm, Sweden, in 1973. It was the first criminal event in Sweden covered by live television.[1]

On 23 August 1973 Jan-Erik "Janne" Olsson, on leave from prison, went into Kreditbanken at Norrmalmstorg, central Stockholm and attempted to rob the bank.[2] Swedish police were called in immediately, two of them went inside, and Olsson opened fire, injuring the hand and jaw of one policeman named Olle Abrahamsson.[3] The other was ordered to sit in a chair and "sing something"; he started singing "Lonesome Cowboy".[3] Olsson then took four people as hostages. He demanded his friend Clark Olofsson be brought there, along with 3 million Swedish Kronor, two guns, bulletproof vests, helmets, and a fast car.[2] Olofsson was a repeat offender who had committed several armed robberies and acts of violence, the first committed at the age of 16.[1]

The government gave permission for Olofsson to be brought as a communication link with the police negotiators. One of the hostages, Kristin Enmark, said she felt safe with Olsson and Olofsson but feared the police might escalate the situation by using violent methods[citation needed]. Olsson and Olofsson barricaded the inner main vault in which they kept the hostages. Negotiators agreed that they could have a car to escape, but would not allow them to take hostages with them if they tried to leave.[4]

Olsson called up the Prime Minister, Olof Palme, and said he would kill the hostages,[5] backing up his threat by grabbing one in a stranglehold; she was heard screaming as he hung up[citation needed]. The next day, Palme received another call. This time, it was hostage Kristin Enmark, who said she was very displeased with his attitude, asking him to let the robbers and the hostages leave.[4]

Olofsson walked around in the vault singing Roberta Flack's "Killing Me Softly".[3] On August 26, the police drilled a hole into the main vault from the apartment above. From this hole, a widely circulated picture of the hostages with Olofsson was taken. Olofsson also fired his weapon into this hole on two occasions and, during the latter attempt, he wounded a police officer in the hand and face.[1]

Olsson fired his weapon and threatened to kill the hostages if any gas attack was attempted[citation needed]. On August 28, the gas was used nevertheless, and after half an hour Olsson and Olofsson surrendered. None of the hostages sustained permanent injuries.[1]

Both Olsson and Olofsson were charged, convicted, and sentenced to extended prison terms for the robbery; Olofsson, however, claimed that he did not help Olsson and was only trying to save the hostages by keeping the situation calm. At the court of appeal, Olofsson's convictions were quashed. He later met hostage Kristin Enmark several times, their families becoming friends. He later committed further crimes.[1]

Olsson was sentenced to 10 years in prison.[6] He received many admiring letters from women who found him attractive. (The woman he later got engaged to was not, as some state, one of the former hostages.) Following his release, he is alleged to have committed further crimes. After having been on the run from Swedish authorities for ten years for alleged financial crimes, he turned himself in to police in 2006—only to be told that the charges were no longer being actively pursued.[4]

The hostages still repeatedly claim they were more frightened of the police than the robbers during their six days of confinement[citation needed]. They clearly sympathized with their captors, which has led to academic interest in the matter. The term Stockholm syndrome was coined by criminologist Nils Bejerot[citation needed]. The hostages, although threatened by Olsson never became violent toward the police or each other.[1] They did not identify with or join the cause of their captors. They were merely upset at the reckless attempts by the police to resolve the situation quickly[citation needed], and some did testify on behalf of Olofsson because they witnessed no evidence of his guilt or complicity in the crime.

In 1996, Jan-Erik Olsson moved to northeastern Thailand with his Thai wife and son,[3][7] and moved back to Sweden in 2013. Olsson's autobiography Stockholms-syndromet was published in Sweden in 2009.[1]

The 40th anniversary of the Norrmalmstorg robbery occurred on 23 August 2013, with newspapers interviewing involved individuals and television covering the anniversary.[1]

Myths of the Norrmalmstorg robbery

The most widely publicized myth about the robbery,[according to whom?][year needed] or rather about the Stockholm syndrome, was that one or both robbers became engaged to their captives. This is not true, and may stem from a false friend in the phrase att engagera sig i någon. In Swedish this means "taking interest in someone". It does not mean "to become engaged to someone" (which would be att förlova sig med någon).