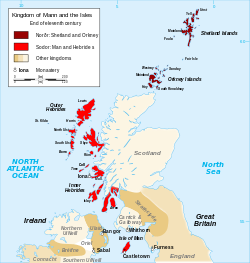 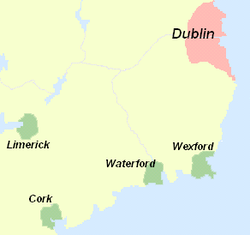 Regions of Scotland, Ireland and Man settled by the Norse.

The Norse–Gaels (Irish: Gall-Ghaedheil or Gall-Ghaeil, Scottish Gaelic: Gall-Ghàidheil) were a people who dominated much of the Irish Sea region, including the Isle of Man, western Scotland and eastern Ireland for a part of the Middle Ages; they were of Gaelic and North Germanic origin and as a whole exhibited a great deal of Gaelic and Norse cultural syncretism. Other modern terms used include Scoto-Norse, Hiberno-Norse, Irish–Norse and Foreign Gaels.

The correct translation for Gall-Ghàidheil or any of the variant spellings is "Foreign Gaels" and although it can in theory mean any Gael of foreign aspect or origin, it was in practice always used of Gaels (i.e. Gaelic-speakers) with some kind of Norse identity. This term is subject to a large range of variations depending on chronological and geographical differences in the Gaelic language, e.g. Gall Gaidel, Gall Gaidhel, Gall Gaidheal, Gall Gaedil, Gall Gaedhil, Gall Gaedhel, Gall Goidel, etc. The modern term in Irish is Gall-Ghaeil, while the Scottish Gaelic is Gall-Ghàidheil.[1]

The people concerned often called themselves Ostmen or Austmenn (East-men), a name preserved in a corrupted form in the Dublin area known as Oxmantown which is derived from Austmanna-tún (Homestead of the Eastmen). In contrast, they called Gaels Vestmenn (West-men) (see Vestmannaeyjar and Vestmanna).

The Norse–Gaels originated in Viking colonies of Ireland and Scotland, the descendants of intermarriage between Norse immigrants and the Gaels. As early as the ninth century, many colonists (except the Norse who settled in Cumbria) intermarried with native Gaels and adopted the Gaelic language as well as many Gaelic customs.[citation needed] Many left their original worship of Norse gods and converted to Christianity, and this contributed to the Gaelicisation.

Gaelicised Scandinavians dominated the region of the Irish Sea until the Norman era of the twelfth century. They founded long-lasting kingdoms, such as the Kingdoms of Man, Dublin, and Galloway,[citation needed] as well as taking control of the Norse colony at York.

The Lords of the Isles, whose sway lasted until the sixteenth century, as well as many other Gaelic rulers of Scotland and Ireland, traced their descent from Norse–Gaels settlements in northwest Scotland, concentrated mostly in the Hebrides.

The Hebrides are to this day known in Scottish Gaelic as Innse Gall, "the islands of foreigners";[citation needed] the irony of this being that they are one of the last strongholds of Gaelic in Scotland. 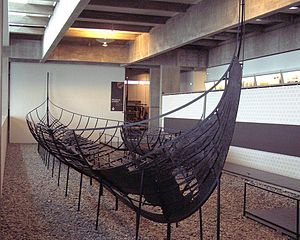 The Norse are first recorded in Ireland in 795 when they sacked Lambay Island. Sporadic raids then continued until 832, after which they began to build fortified settlements throughout the country. Norse raids continued throughout the tenth century, but resistance to them increased. The Norse established independent kingdoms in Dublin, Waterford, Wexford, Cork and Limerick. These kingdoms did not survive the subsequent Norman invasions, but the towns continued to grow and prosper.

The term Ostmen was used between the 12th and 14th centuries by the English in Ireland to refer to Norse-Gaelic people living in Ireland. Meaning literally "the men from the east" (i.e. Scandinavia), the term came from the Old Norse word austr or "east". The Ostmen were regarded as a separate group from the English and Irish and were accorded privileges and rights to which the Irish were not entitled. They lived in distinct localities; in Dublin they lived outside the city walls on the north bank of the River Liffey in Ostmentown, a name which survives to this day in corrupted form as Oxmantown. It was once thought that their settlement had been established by Norse–Gaels who had been forced out of Dublin by the English but this is now known not to be the case. Other groups of Ostmen lived in Limerick and Waterford. Many were merchants or lived a partly rural lifestyle, pursuing fishing, craft-working and cattle raising. Their roles in Ireland's economy made them valuable subjects and the English Crown granted them special legal protections. These eventually fell out of use as the Ostmen assimilated into the English settler community through the 13th and 14th centuries.[2]

Iceland and the Faroes

It is recorded in the Landnámabók that there were papar or culdees (Gaelic monks) in Iceland before the Norse. This appears to tie in with comments of Dicuil and is given further weight by recent archaeological discoveries. The settlement of Iceland and the Faroe Islands by the Norse would have included many Norse–Gael settlers, as well as slaves and servants. They were called Vestmen (Western men), and the name is retained in Vestmanna in the Faroes and the Vestmannaeyjar off the Icelandic mainland, Irish slaves escaped to.

A number of Icelandic personal names are of Gaelic origin, including Njál, Brján, Kjartan and Kormakr (from Niall, Brian, Muircheartach and Cormac).[3] Patreksfjörður, an Icelandic village, was named after Saint Patrick. A number of placenames named after the papar exist on Iceland and the Faroes.

According to some circumstantial evidence, Grímur Kamban, seen as the founder of the Norse Faroes, may have been a Norse Gael.

According to the Faereyinga Saga... the first settler in the Faroe Islands was a man named Grímur Kamban – Hann bygdi fyrstr Færeyar, it may have been the land taking of Grímur and his followers that caused the anchorites to leave... the nickname Kamban is probably Gaelic and one interpretation is that the word refers to some physical handicap (the first part of the name originating in the Old Gaelic camb crooked, as in Campbell Caimbeul Crooked-Mouth and Cameron Camshron Crooked Nose), another that it may point to his prowess as a sportsman (presumably of camóige / camaige hurley – where the initial syllable also comes from camb). Probably he came as a young man to the Faroe Islands by way of Viking Ireland, and local tradition has it that he settled at Funningur in Eysturoy.[4]

Even today, many surnames particularly connected with Gaeldom are of Norse origin, especially in the Hebrides and Isle of Man. Several Norse words also influenced modern Scots English and Scottish Gaelic, such as bairn (child) and barn (Norwegian).