North Berwick (/nɔərθ ˈbɛrᵻk/; Scottish Gaelic: Bearaig a Tuath)[1] is a seaside town and former royal burgh in East Lothian, Scotland. It is situated on the south shore of the Firth of Forth, approximately 25 miles (40 km) east north east of Edinburgh. North Berwick became a fashionable holiday resort in the 19th century because of its two sandy bays, the East (or Milsey) Bay and the West Bay, and continues to attract holiday makers to this day. Golf courses at the ends of each bay are open to visitors. 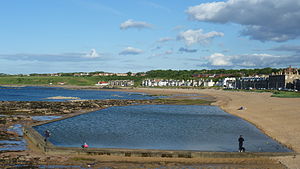 The name North Berwick means North 'barley farmstead' ('bere' in Old English means 'barley' and 'wic' in Old English is 'farmstead'). The word North was applied to distinguish this Berwick from Berwick-upon-Tweed, which throughout the Middle Ages the Scots called South Berwick. It was recorded as Northberwyk in 1250. On the south of North Berwick Law there is evidence of at least eighteen hut circles, rich middens and a field system dating from 2000 years ago. 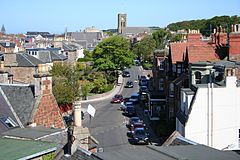 A view east towards the town centre 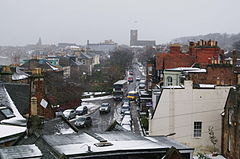 The same view in winter

North Berwick Harbour was built in the 12th century, and for 500 years there was a ferry crossing to Earlsferry, near Elie in Fife. This was popular with pilgrims to St Andrews. This ferry was recently reinstated; during the summer a boat travels between North Berwick and Anstruther in Fife, in homage to the original ferry. Excavations have shown there was activity at the harbour area from as early as the 8th century, while the "Auld Kirk Green" at the harbour was used for gatherings by the accused in the North Berwick Witch Trials. Legend has it that "Satan himself" attended a ritual there in 1590, although it is more likely that Satan was "played" by Francis Stewart Hepburn, 5th Earl of Bothwell. During the 16th century at least 70 people were implicated in the Witch Trials, and the events inspired works such as Burns' "Tam o' Shanter" and "The Thirteenth Member" by Mollie Hunter. One of the most famous Witch trials at North Berwick was of the woman named Agnes Sampson. She was accused of making a potion to make the storms rough as King James VI of Scotland was sailing home from Denmark with his new wife, Anne of Denmark. The trial took place in 1591 and King James was there himself. Sampson was tortured to confess and then burned at the stake, like many other innocent people. 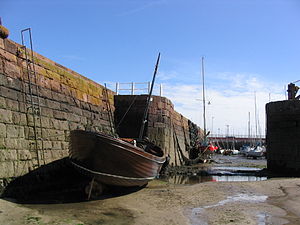 English invaders in the Middle Ages led to the construction of nearby Tantallon Castle, and St Mary's Priory, nunnery, was built at North Berwick. The late 19th century saw North Berwick develop golfing and holiday facilities.

The size and population of the town remained fairly steady until the 1970s, at which point housebuilding began in earnest around the periphery of the town, first to the south (1950s–70s), then a series of major expansions to the west (1980s-present) along the line of the railway. There is talk of further developments focussing on "affordable housing" on the south side of the town. While the population might not have truly "exploded", house prices have. North Berwick consistently appears at the top of national house price surveys, and like-for-like prices are comparable to Edinburgh. North Berwick was listed as the most expensive seaside town in Scotland in 2006, and was second to St. Andrews in 2009.[2][3]

Several of the Islands of the Forth are near the town and visible from it: e.g. Fidra, The Lamb, Craigleith, and Bass Rock; the latter hosts a thriving colony of birds, including puffins, gannets, and other seabirds. The Bass Rock appears white, but this is due largely to the gannets and their guano that cover much of its surface. The seabirds themselves can be observed at close range through remote cameras operated from the recently developed Scottish Seabird Centre near the harbour. 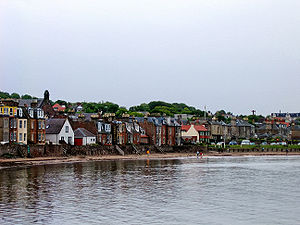 The town is served by North Berwick railway station. The North Berwick Line has provided a rail link with Edinburgh since the 19th century and the line, now operated by First ScotRail, is still the principal transit link between the town and the capital. The service takes 33 minutes and runs hourly with extra trains during peak commuting periods and on Saturdays. Combination rail-and-entry tickets for the Scottish Seabird Centre are available. There is occasional service through to Glasgow Central station on weekdays although anyone heading for central Glasgow is advised to switch to the Edinburgh – Glasgow Queen St. service. First has a monopoly on public transport between North Berwick and Edinburgh as they also operate the bus route which has a similar frequency and a journey time of about 90 minutes. Edinburgh is the nearest airport, approximately a 45-minute drive or around 80 minutes by public transport.

Within the town there is a half-hourly bus service which runs on a loop from the High Street (Church St. bus stop) to Tesco and back before continuing on to Edinburgh. There is also a seasonal park-and-ride and local services to Haddington, Dunbar and attractions such as the National Museum of Flight at East Fortune.

Robert Louis Stevenson (1850–1894), spent many holidays in the town as a child and young man. His father, Thomas Stevenson the famous engineer and lighthouse builder took his family to stay in various locations in the town. The island of Fidra is said to be the original inspiration for Treasure Island, and much of his novel Catriona (the sequel to Kidnapped) is set locally.

The Scottish author William Dalrymple (born 1965), whose work primarily focuses on British India, has roots in the town, with his family having once owned much of the area. William's father Sir Hew Hamilton-Dalrymple is the current and 10th Baronet of North Berwick. William is the youngest of four brothers.

Since 1999 North Berwick has been twinned with Kerteminde, Denmark.