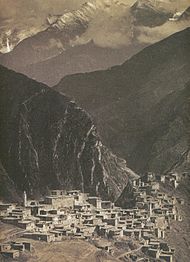 The North Caucasus (or Ciscaucasia; Russian: Се́верный Кавка́з; IPA: [ˈsʲevʲɪrnɨj kɐfˈkas]) is the northern part of the Caucasus region between the Black Sea and the Caspian Sea and within European Russia.

Politically, the Northern Caucasus (territory north of the Greater Caucasus Range) includes the Russian Republics of the North Caucasus. As part of the Russian Federation, the Northern Caucasus region is included in the North Caucasian and Southern Federal Districts and consists of Krasnodar Krai, Stavropol Krai, and the constituent republics, approximately from west to east: Republic of Adygea, Karachay–Cherkessia, Kabardino-Balkaria, North Ossetia–Alania, Ingushetia, Chechnya, and Republic of Dagestan.[1] Since October 2007, separatists and Caucasus Front soldiers led by Dokka Umarov and Akhmed Yevloyev have claimed all of the North Caucasian regions from Karachay–Cherkessia to the Caspian Sea as part of their territory invaded by Russia during the 18th century that expelled most of the Caucasians towards Turkey, Iran, Bulgaria, Syria, and Jordan. This proclaimed Caucasus Emirate has been met with opposition within the Caucasus region from the Chechen Republic of Ichkeria.[citation needed]

Geographically, the term North Caucasus comprises the northern slope and western extremity of the Caucasus Major mountain range, as well as a part of its southern slope to the West (until the Psou River). The Forecaucasus steppe area is often also encompassed under the notion of "North Caucasus", thus the northern boundary of the geographical region is generally considered to be the Kuma-Manych Depression. It is bounded by the Sea of Azov and Kerch Strait on the west, and the Caspian Sea on the east. According to the Concise Atlas of the World, Second Edition (2008), most of the Ciscaucasian region lies on the European side of the "commonly accepted division" that separates Europe from Asia.

In 2011, the Russian government has put forward plans to create a Caucasian version of Silicon Valley, at a cost of 32 billion rubles ($1.1 billion) as part of on-going efforts to generate opportunities in the troubled Russian region.[2]