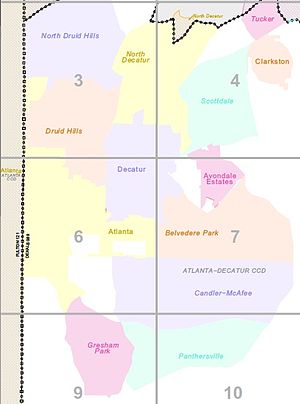 North Decatur is a census-designated place (CDP) in DeKalb County, Georgia, United States. The population was 16,698 at the 2010 census.[3]

According to the United States Census Bureau, the CDP has a total area of 5.0 square miles (12.9 km²), all of it land. The North Decatur CDP's boundaries are:

There is no true center to North Decatur; there are three commercial clusters at corners of the CDP:

Toco Hills, a de facto commercial center for several CDPs north of the city of Decatur, has grown from a country store in 1950, with a single gas pump and a pot-bellied stove, to multiple shopping centers, coffee houses, houses of worship and townhouses.

North Decatur primarily consists of 1950's- and 1960's-era ranch homes, although condominiums are increasingly being developed in this community. Its close proximity to Atlanta's Midtown and Buckhead districts, as well as Emory University and Decatur, makes it a desirable "in-town" location for what was originally developed as a suburban community.

There were 7,974 households out of which 14.2% had children under the age of 18 living with them, 33.5% were married couples living together, 6.3% had a female householder with no husband present, and 58.2% were non-families. 45.5% of all households were made up of individuals and 17.3% had someone living alone who was 65 years of age or older. The average household size was 1.85 and the average family size was 2.61.

An early settler in this part of DeKalb County was Chapman Powell, whose "Medicine House" cabin was built near 1218 Clairmont Road. (It has been preserved and relocated to Stone Mountain Park.) Dr. Powell (1798-1870) owned most of the land in the Candler Lake and South Fork Peachtree Creek area during his lifetime. His land was later purchased by Walter Candler.[5]

Ezekiel Mason built a mill on the east side of Clairmont Road on Burnt Fork Creek. DeKalb County's Mason Mill Park is named after Ezekiel Mason.