'Downs' is from Old English dun meaning, amongst other things, 'hill'. The word acquired the sense of 'elevated rolling grassland' around the fourteenth century.[2] These hills are prefixed 'north' to distinguish them from the morphologically similar range of hills - the South Downs - which run roughly parallel to them but some 50 km (31 mi) to the south. 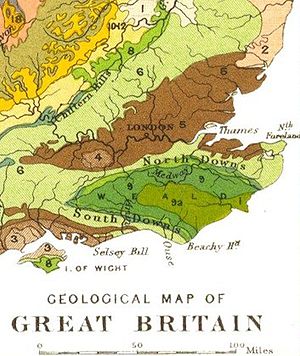 Geology of the South East, Chalk is light green (6)
File:North-downs-view-from-margery-wood.jpg
View from North downs towards Reigate

The narrow spine of the Hog's Back between Farnham and Guildford forms the western extremity of the North Downs, whilst the cliffs between Folkestone and Deal terminate the ridge in the east. There are two distinct aspects, the steep south-facing escarpment and the gentle north-facing dip slope. The southern boundary is defined by the foot of the escarpment which gives way to the flat, broad clay lands between the Downs and Greensand Ridge known as the Vale of Holmesdale. The northern boundary is less apparent but occurs where the chalk submerges below the more recent Paleocene deposits.[1]

The Downs are highest near the Kent-Surrey border, often reaching heights in excess of 200 metres above sea level at the crest of the escarpment. The highest point is Botley Hill in Surrey at 269 metres (885 ft).[3] The County top of Kent at Betsom's Hill, with a height of 251 metres (823 ft) is located nearby,[4] and the highest point in London, Westerham Heights, at 245 metres (804 ft) is on the northern side of the same hill.[5] East of the Medway Valley the Downs become broader and flatter, extending as far as the Isle of Thanet.

The ridge is intersected by the valleys of a series of rivers: the Wey, Mole, Darent, Medway and Stour rivers. These drain much of the Weald to the south, the western ones are tributaries of the Thames; they carve steep valleys through the chalk and provide natural corridor routes. In addition to existing rivers, the Downs are crossed by a number of wind gaps – fossil river valleys no longer occupied by rivers, including those at Farnham, Betchworth, Caterham, Lyminge and Hawkinge. Except for the river valleys and wind gaps, the crest of the escarpment is almost continuous along its length. The dip slope is dissected by many small dry valleys, and in the broad eastern part in Kent, by further river valleys such as that of the Little Stour. Leith Hill is sometimes incorrectly referred to as part of the North Downs but is located on the parallel Greensand Ridge[6] and does not consist of chalk.

File:KentGeologyWealdenDome.svg
A cross-section, showing the Wealden Dome, and relating it to the towns of Kent

The Downland of the North Downs consists of distinct lithostratigraphic units (the types of strata, the names of which are always capitalized):

The Upper Greensand marks the southern edge of the Downs, being underlain by:

The topography of the North Downs mainly consists of the Chalk Group, the rock strata of the Upper Cretaceous period which in certain areas is overlain by superficial deposits of gravels or clay-with-flints.

The Greensand Ridge is separate from the Downs. Again, one has to be aware of the distinction between 'greensand' (typically glauconitic sand or sandstone; literally 'green sand') and 'the Greensand', a lithostratigraphic term which usually refers to the Lower Greensand Group (of Lower Cretaceous age). The Lower Greensand does contain some greensand, but also much silt, clay and limestone: most of it is neither green nor sand. It forms a distinct layer below the Gault Formation and the Upper Greensand Formation which directly underlie the Chalk Group. The 'Greensand Ridge' typically refers to one of a series of escarpments formed by the Lower Greensand. In Surrey, the Upper Greensand is thin and is not separately marked by rising ground, but elsewhere (in Sussex and Berkshire, for example) it too forms an escarpment.

These groups and formations each occur in separate layers. In Surrey these dip northwards, generally at an angle of 2 degrees or less but increasing to as much as 55 degrees in the Hogs Back area, west of Guildford.

The North Downs support several important habitats. The most distinctive of these is chalk grassland which is largely limited to steep escarpment and valley slopes. This semi-natural habitat is maintained through sheep, cattle and rabbit grazing which prevents scrub encroachment. It has been noted that chalk grassland to the west of the Medway Valley is dominated by upright brome (Bromus erectus) and fescue (Festuca) whilst grassland to the east is dominated by tor-grass (Brachypodium pinnatum).[1] Because of the close proximity of the North Downs to the continent, the warm climate and the south facing escarpment several plant species survive on the chalk grassland which are scarce or not found elsewhere in the British Isles.

Chalk grassland also supports a rich fauna, particularly of insects. Notable butterfly species include Adonis blue (Lysandra bellargus) and silver-spotted skipper (Hesperia comma) which may be found on warm, sheltered, south facing slopes. The chalk downland above the Stour Valley is the only British site for the black-veined moth (Siona lineata). Other notable moth species that occur on the North Downs include the fiery clearwing moth (Bembecia chrysidiformis) and straw belle moth (Aspitates gilvaria).

Woodland was far more extensive on the North Downs prior to human clearance 4000 to 5000 years ago.[1] Fragments still remain particularly where the layer of clay with flints overlying the chalk has inhibited clearance.[7] Where this is the case species such as pedunculate oak (Quercus robur) predominate although much woodland has been replanted with conifer and sweet chestnut (Castanea sativa).[1] In Surrey, there are localised areas of chalk heath where heathland and chalkland plants grow alongside each other.

Calcaerous woodland occurs on thin soils where chalk is close to the surface. These conditions are most often found on the escarpment of the North Downs and on valley slopes but may also occur on the plateau of the dip slope. Calcaerous woodland is typically dominated by beech (Fagus), hornbeam (Carpinus betulus), yew (Taxus baccata) and ash (Fraxinus excelsior). Box Hill comprises one of the largest areas of native box (Buxus sempervirens) woodland in England. One notable species characteristic of calcaerous woodland is the nationally scarce lady orchid (Orchis purpurea) which is found in more than 100 sites on the Kent stretch of the North Downs although it is confined to just two sites elsewhere in the UK.[8]

On the summit of the cliffs between Deal, Kent and Folkestone the early spider orchid (Ophrys sphegodes) occurs in large numbers as well as the rare oxtongue broomrape (Orobanche artemisae-campestris). Naturally exposed chalk is rare inland with the exception of the river cliffs formed by the Mole on the west face of Box Hill and at Ham Bank in Norbury Park. However, quarry lakes within chalk pits provide habitat for great crested newt (Triturus cristatus). The scarce musk orchid (Herminium monorchis) has colonised disused chalk pits near Hollingbourne in Kent.[9]

The discovery of worked flints and human and animal remains dating from the Lower Paleolithic, approximately 400,000 years ago at Barnfield Pit near Swanscombe provides the earliest evidence of human occupation in the North Downs. It is suggested that human activity at this time coincided with intermittent warm phases during the last glacial period[10] and that continuous occupation of the Downs did not occur until warming after the glaciation. Flint axes have also been found on river terraces at Farnham,[11] on Walton and Banstead Heaths and on the crest of the escarpment above Folkestone.[7] There is considerable evidence of Mesolithic activity in the Surrey Downs through the discovery of pit-dwellings at Weston Woods near Albury and the quantity of discarded tools, microliths and other implements discovered.[7]

At about 3000 BC the emergence of Neolithic culture saw the lifestyle of the Mesolithic hunter-gatherer shift to a more sedentary and communal lifestyle that relied upon the keeping of livestock and the growing of crops.[10] There is substantial evidence of Neolithic activity within the North Downs, notably the long barrows concentrated in the Medway and Stour valleys. The Medway long barrows, which include Kit's Coty House and Coldrum Stones are constructed of sarsen stone, locally found on Blue Bell Hill and the valleys of the dip slope, whilst the Stour Valley long barrows are constructed of earth.[10]

The landscape of the Downs has been greatly shaped by man. Deforestation has been an important activity that has taken place on the downs for centuries. Today, the woodland that remains largely exists where deforestation has been inhibited by steep slopes or the layer of clay with flints which is difficult to plough. Because of the many small farms that have survived on the downs, a network of narrow lanes and minor roads has developed. This has resulted in a landscape similar to that found in Normandy known as bocage. The predominant type of farming on the Downs is arable farming and this increased greatly during the twentieth century. Pastoral farming also occurs but to a lesser extent. Human settlements within the downs have generally formed in sheltered valleys and at the foot of scarp slope (known as spring line settlements). The Downs has in recent years seen the plantation of vineyards along the southern slopes, in particular the Denbies Wine Estate, Dorking, which is the largest vineyard in the country, accounting for 10% of the country's vines. The chalky soils make the area similar to the Champagne region.

There is plenty of evidence of chalk extraction on the Downs particularly along the scarp slope. Oil drilling at the foot of the downs occurs in several locations in Surrey. The Kent coalfield was established in the late 19th century after coal was found in 1890. Four collieries produced a successful output and lasted throughout the 20th century - Betteshanger, Snowdown, Tilmanstone and Chislet. The east to west ridge of the downs has provided a natural transport route for centuries. Much of the historic Pilgrims' Way still survives at the foot of the scarp slope and this has been joined much more recently by the M20 motorway. The scarp slope has also been used for fortification and many examples of this still exist such as Thurnham Castle and on Castle Hill, Folkestone Castle Hill near Folkestone.

Many beauty spots on the North Downs are owned by the National Trust such as Box Hill and Langdon Cliffs. Other areas of interest are Newland's Corner, Wye Downs and the Hog's Back. Much chalk grassland and ancient woodland on the downs is open-access and there are also many historic sites on the downs such as Kit's Coty House near Maidstone and Dover Castle.