North Hwanghae is divided into 3 cities ("si") and 19 counties ("kun"). Three of these counties (Chunghwa, Kangnam, and Sangwon) were added to the province in 2010 after being split from Pyongyang.[1] 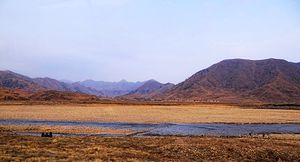 North Hwanghae is connected to the rest of the country (and allegedly to South Korea) by way of the Pyongbu Railway Line (known in South Korea as the Kyongui Line), which, in theory, runs from Pyongyang to Pusan; however, in reality, the line is cut short by the Korean Demilitarized Zone. It is also served by several large highways, most notably the Pyongyang-Kaesong Motorway.

North Hwanghae has many historical relics as the site of the Koryo-dynasty capital at Kaesong, a depository for many famous historic relics. The province is also home to the tombs of many of the Koryo monarchs, the most famous being the tombs of kings Taejo and Kongmin, though others are spread throughout Kaesong and Kaepung county. Kaesong also houses the Koguryo-era Taehungsan Fortress, built to protect the kingdom's capital at Pyongyang and enclosing the famous Kwanum Temple. Nearby to Sariwin is the famous Jongbangsan Fortress, another Koguryo satellite for the defense of Pyongyang. This fortress encompasses the 9th-century Songbulsa Buddhist temple, one of the oldest and most picturesque in the country.