North Mymms is a civil parish in the English county of Hertfordshire.

The village itself is an enclosure. North Mimms Park and Brookmans Park enclose large areas of the parish. Even the parish church (St Mary's) stands in the park of North Mimms; in it is a chapel, the burialplace of the Coningsbys. There is a monument to Robert Knolles, also of North Mimms Place, dated 1458, and a brass to a priest. There is a large monument to Lord Somers, Baron Evesham, and lord chancellor in the time of William III, d. 1716. The monument was erected by his sister, Lady Elizabeth Jekyll. 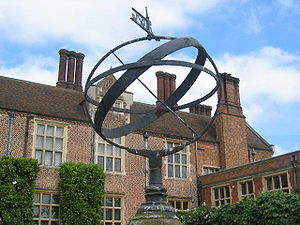 North Mymms House was a location for the 1983 film The Wicked Lady, starring Faye Dunaway as a bored aristocratic lady who takes up highway robbery.

North Mymms is also home to the Hawkshead Campus of the Royal Veterinary College, part of the University of London. The campus also includes the Equine Referral Hospital, and the Queen Mother Hospital for Animals.[1]

North Mymms is spelt differently from the sister village of South Mimms. The two spellings Mymms and Mimms appear to have been used interchangeably over the centuries, until Feb 20th 1939 when Hertfordshire County Council decreed in a council meeting that the spelling be fixed as Mymms.[2]