North Point (Chinese: 北角) is a mixed-use urban area in the Eastern District of Hong Kong. It is in the northeastern part of Hong Kong Island, between Causeway Bay and Quarry Bay, and projects toward Kowloon Bay.[1]

North Point is bounded by Hing Fat Street (興發街) to the west and by Mansion Street (民新街) to the east, by Victoria Harbour to the north and Braemar Hill to the south.[2] The Fortress Hill area forms the westernmost part of North Point, while the Tsat Tsz Mui area is located in its easternmost part. 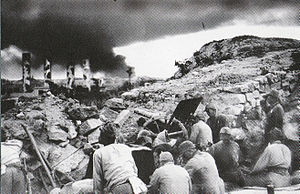 North Point Power Station during the Japanese invasion of Hong Kong in December 1941. 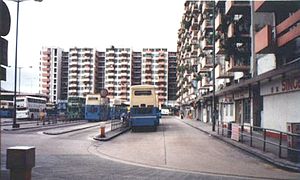 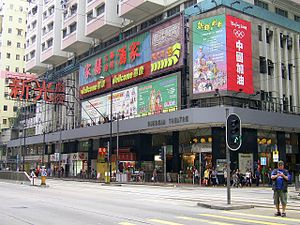 Parts of North Point have been inhabited since before the British arrived in the mid-19th century. The Metropole Hotel was built in 1899 and was used until 1906.[3] In 1919, the Hongkong Electric Company started operation of the territory's second power station at North Point.[4] In the 1920s, Ming Yuen Amusement Park became a popular entertainment venues on the Island. During the 1930s, the beaches of North Point became one of the most popular places for holding swimming gala in Hong Kong. In 1938, the North Point Refugee Camp was built to accommodate the influx of refugees from the Mainland. The camp comprised 26 huts. Access to the camp was via Kam Hong Road and Marble Road. During World War II, the camp was renamed the North Point Camp, and used as a prisoner of war camp for captured Canadian soldiers during the Japanese occupation.[5]

During the Chinese Civil War, a large number of the rich and middle class from Shanghai fled to Hong Kong to escape the turmoil of war, many of them settled in North Point. In 1950, North Point became known as "Little Shanghai", since in the minds of many, it has already become the replacement for the surrendered Shanghai in China.[1] The first wave of emigrants introduced Shanghai-style restaurants, beauty parlours and barbershops. They also learned Cantonese and intermarried with people of other dialect groups. During the 1950s, North Point was the premiere place of residence for these emigrants, leading to a massive population boom; by the end of 1960, North Point was listed as the most densely populated place on earth by the Guinness Book of Records.[6] The first school in Hong Kong to use Mandarin as the main medium of instruction, Kiangsu and Chekiang Primary School, was founded in 1953 in North Point by these early Shanghainese immigrants. Shanghai at the time was heavily associated with leftist movements; leftist-supported businesses in North Point, such as the Sunbeam Theatre which showcases Chinese Opera, are a legacy of their influence.

The second group that moved to North Point were the Fujianese, who were mostly displaced by political events in Southeast Asia. Small Indonesian specialist grocery shops selling coffee, coconuts, and bumbu are some of the remaining traces of their identity. The area became known as "Little Fujian".[1]

After Cantonese, Min Nan is the most widely spoken language here. Many Min Nan associations (閩南同鄉會) are based in North Point to bring people from the same towns or villages together. Several Min Nan-speaking churches are located in North Point to serve the Min Nan Christians.[citation needed] 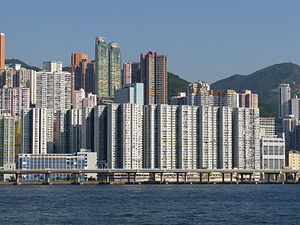 View of City Garden and North Point from Victoria Harbour. The elevated road is the Island Eastern Corridor. 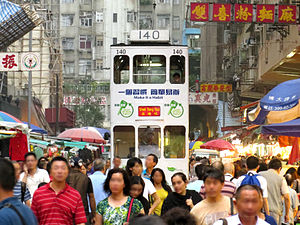 North Point Estate, beside the North Point Ferry Pier, was demolished in 2003.

Located near Tin Hau Station is Island Children's Montessori School & Kindergarten (ICMS, Chinese: 港島兒童蒙特梭利學校), an international school providing playgroup, nursery, kindergarten and summer camp programs.[8] Established in 2008, it was chosen as one of the top kindergartens in Hong Kong by Asia Tatler in 2011.[9]

The Chinese International School is located on Hau Yuen Path in Braemar Hill and is a private, co-educational school providing education to students from Reception to Year 13. Established in 1983,[11] the school has a diverse student body with over 30 nationalities represented. Secondary school students pursue the IB Primary Years Programme before moving on to the IB Diploma. 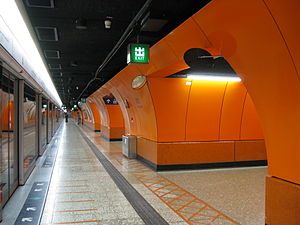 Streets in North Point include: