From Infogalactic: the planetary knowledge core
Jump to: navigation, search
This article is about the metropolitan borough. For the parliamentary constituency, see North Tyneside (UK Parliament constituency).

The Metropolitan Borough of North Tyneside is a metropolitan borough of Tyne and Wear, in North East England, and is part of the Tyneside conurbation. Its seat is Wallsend Town Hall.

North Tyneside is bounded by Newcastle upon Tyne to the west, the North Sea to the east, the River Tyne to the south and Northumberland to the north. Within its bounds are the towns of Wallsend, North Shields and Whitley Bay, which form a continuously built-up area contiguous with Newcastle.

The following places are located in North Tyneside:

Unlike most English districts, its council is led by a directly-elected mayor, currently Labour's Norma Redfearn. After the 2012 elections the council was Labour led, Labour having 43 councillors, the Conservatives 12 and the Lib Dems 5.[2]

The council is elected "in thirds", with one councillor from each three-member ward elected each year for the first three years, the mayoral election being held on the fourth year. With three councillors elected from each of 20 wards, there are 60 councillors in total.

A third of the councillors were elected as part of the English local elections of 2008.

A third of the councillors were elected as part of the English local elections of 2007.

North Tyneside lies in the coalfield that covers the South-East of the historic county of Northumberland. It has traditionally been a centre of heavy industry along with the rest of Tyneside, with for example the Swan Hunter shipyard in Wallsend, and export of coal. Today most of the heavy industry has gone, leaving high unemployment in some areas (over the borough, 3.2% compared to 2.7% for the UK). The borough is the 69th most deprived in England, out of 354. However some parts function as wealthy dormitory suburbs of Newcastle, such as Tynemouth. Recent growth has come in the A19 corridor with new industrial estates and retail parks. 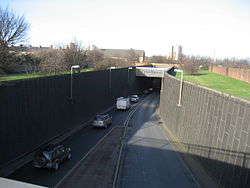 North Tyneside is served by 17 stations on the Tyne & Wear Metro on a loop from Newcastle through Wallsend, North Shields, Whitley Bay, Benton and back to Newcastle. Trains operate at least every 15 minutes, with extra services in the peak hours. Most of the stations serving North Tyneside fall into fare zones B and C.

North Tyneside has an extensive bus network, with most areas benefiting from direct services to Newcastle. Many areas have direct bus services to Cramlington, Blyth or Morpeth. The principle bus operators in the area are Arriva (all areas), Go North-East (most areas) and Stageoach in Newcastle (Benton, Forest Hall, Killingworth and Wallsend).

There is an international ferry terminal at Royal Quays in North Shields, with services to Norway, Sweden and the Netherlands.