From Infogalactic: the planetary knowledge core
Jump to: navigation, search
Not to be confused with South Versailles Township, Allegheny County, Pennsylvania.

North Versailles (/ˌnɔːrθ vɜːrˈseɪlz/ vur-SAYLZ) is a first class township in Allegheny County, Pennsylvania, United States. The population was 10,229 at the 2010 census.[1] The township derives its name from the Palace of Versailles.[2]

The territory designated in 1788 as Versailles Township now contains the townships of North Versailles and South Versailles; the boroughs of White Oak, East McKeesport, Wall, Versailles, and portions of Wilmerding and Trafford; as well as the major portion (excluding 10th ward) of the city of McKeesport.

North Versailles was further divided with the formation of the boroughs of East McKeesport (1893), Wall (1904), and portions of the boroughs of Wilmerding (1890) and Trafford (1904). The section of Wilmerding on the north side of Turtle Creek was originally part of the former Patton Township, and the majority of Trafford is situated in Westmoreland County. An area of North Versailles (Allequippa Grove, later known as North McKeesport and Highland Grove) was annexed by the city of McKeesport.

Early villages and population centers in North Versailles included Port Perry, Saltsburgh and Allequippa Grove along the Monongahela River; Pleasant Hill near to what is now East McKeesport; Point Pleasant located near the present intersections of Route 30 and McKee and Naser roads; and Stewart's Station, Spring Hill, Mosside Station, Wall Station, and Wilmerding Station along Turtle Creek, a tributary of the Monongahela River.

North Versailles has a number of named neighborhoods, including the following which roughly correspond to the township's seven wards:

North Versailles, East McKeesport, Wilmerding, and Wall consolidated school systems in the early 1960s to form the East Allegheny School District. East Allegheny High School (the Wildcats – 1969) is situated off Route 48 (Jack's Run Road) near the intersection of U.S. Route 30. Green Valley School (1955) is the only surviving school of the former North Versailles School District which included (but is not limited to) the following other schools during the township's history:

At the formation of the East Allegheny School District (known as Westinghouse Valley Area Schools from 1962 to 1966), Westinghouse Memorial High School became the district's official high school until the building of East Allegheny High School in 1969. The former East McKeesport High School was transformed into a Junior High serving East McKeesport, Wilmerding, Wall and certain portions of North Versailles near East McKeesport. Park Terrace Junior High (1955—the Bobcats) served the township. During the 1968–69 school year, Park Terrace was designated a middle school serving all seventh and eighth graders in the district and East McKeesport served only 9th grade students for this one year; it would serve other populations until its closure in 1982. Neither school building exists today. 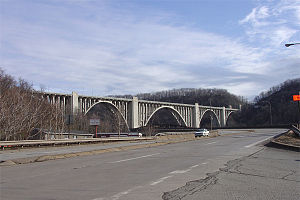 North Versailles is bordered by the Monongahela River to the west, Turtle Creek to the west and north, North Huntingdon and Westmoreland County to the east, and the city of McKeesport and the borough of White Oak to the south. The township surrounds East McKeesport, Wilmerding, and Wall.

The Lincoln Highway, US Route 30, traverses North Versailles and on its western border crosses the Turtle Creek valley via the George Westinghouse Bridge into East Pittsburgh.

Comedian Donna Jean Young, whose career was built upon her material related to East McKeesport and "Woolmerding" (as she pronounced and spelled Wilmerding in her act), was a resident of Broadway Extension, Arlington Plan, North Versailles Township. In her youth, portions of North Versailles used East McKeesport as a postal address and were long associated with this community.[5] Young was briefly a cast member on Rowan and Martin's Laugh-In.[6] In 1968, she released an album on Epic Records, Live From East McKeesport.[7]

Gordon Jones, a 1975 graduate of East Allegheny High School, was an All-American wide receiver at the University of Pittsburgh and went on to play in the NFL for the Los Angeles Rams.[citation needed]

Patricia Welesko Garland, a 1979 graduate of East Allegheny High School, was named one of 10 Outstanding Young Americans by the U.S. Junior Chamber (Jaycees) in 2000.[citation needed] She is a chemical engineer and program manager at Oak Ridge National Laboratory.[citation needed]