North Yorkshire Police is the territorial police force covering the non-metropolitan county of North Yorkshire and the unitary authority of York in northern England. The force covers England's largest county and comprises three area command units. As of March 2013 the force had a strength of 1,370 police officers, 158 Special Constables,[3] 173 PCSOs and 1,095 police staff.

The force was formed on 1 April 1974, under the Local Government Act 1972, and was largely a successor to the York and North East Yorkshire Police, also taking part of the old West Riding Constabulary's area.

Proposals made by the Home Secretary on 21 March 2006 would have seen the force merge with West Yorkshire Police, South Yorkshire Police and Humberside Police to form a strategic police force for the entire region.[4] However, these proposals were later dropped.[5]

It was announced in January 2007 that the then Chief Constable, Della Cannings, would be retiring from the force on 16 May 2007 due to illness.[6] Della Cannings made the headlines on a number of occasions. She was not allowed to purchase wine from Tesco in Northallerton in March 2004 until she had taken off her hat and epaulettes, as it was illegal to sell alcohol to on-duty police officers.[7] In October 2006 it was revealed that more than £28,000 had been spent to refurbish a shower in her office.[8] 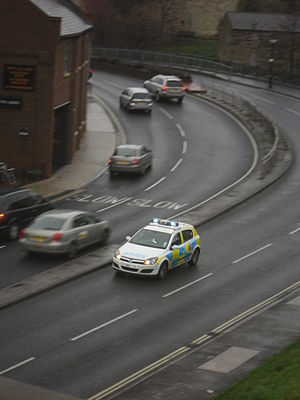 A North Yorkshire Police car responds to an emergency call

Currently, police vehicles used include the Ford Focus and Vauxhall Astra (normal local "Beat" cars). The "Traffic" section use the Volvo V70, Škoda Octavia and Subaru Impreza. Mercedes, Peugeot and Ford Transit police vans also present, as are Nissan 4x4s in some areas. The traffic section also use motorcycles. The force covers over 6,000 miles of road. The force has a new livery from March 2009, consisting of a high visibility panels of yellow and blue on all vehicles, new vehicles include Ford Focus estates and Ford Transit Connect vans, as well as BMW and Audi road policing units.

North Yorkshire Police Authority had 9 councillors (drawn from both North Yorkshire County Council and City of York Council), 3 justices of the peace, and 5 independent members.

It was abolished in November 2012 to be replaced by a Police and Crime Commissioner.

The Police Memorial Trust lists and commemorates all British police officers killed in the line of duty, and since its establishment in 1984 has erected over 38 memorials to some of those officers.

The following officers of North Yorkshire Police are listed by the Trust as having died attempting to prevent, stop or solve a crime, since the turn of the 20th century:[10]