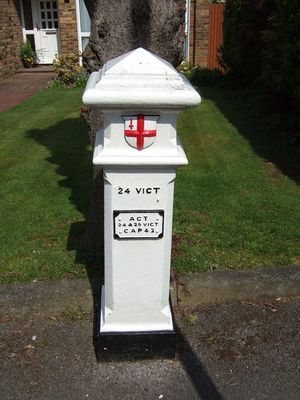 Northaw was an ancient parish in the Cashio Hundred of the county of Hertfordshire. It formed part of the Hatfield Rural District from 1894,[2] when the parish council was created.

The parish was within the Metropolitan Police District and was part of the review area of the Royal Commission on Local Government in Greater London, however it did not form part of the proposed Greater London area.[3]

The Hatfield Rural District was abolished in 1974 and the parish become part of the Welwyn Hatfield district. The parish was renamed Northaw and Cuffley in 1982.[4] In 1994 there was a change to the boundary with Greater London when some land was gained from the London Borough of Enfield and the boundary became aligned to the M25 motorway.[5]

The civil parish is located approximately 13.5 miles (21.7 km) north of central London and is adjacent to the Greater London boundary to the south. It is within the Metropolitan Green Belt and has large sections of protected open land. The parish includes the settlements of Northaw and Cuffley. For postal addresses, the parish is within the EN6 postcode district of the Potters Bar post town.

The parish had a population of 5,190 according to the 2001 census, most of whom live in Cuffley.

Media related to Northaw and Cuffley at Wikimedia Commons