From Infogalactic: the planetary knowledge core
Jump to: navigation, search
Not to be confused with North Eastern Athletic Conference or Northeastern Conference.

The Northeast Conference (NEC) is a collegiate athletic conference whose schools are members of the NCAA. Teams in the NEC compete in Division I for all sports except football, which competes in the Division I Championship Subdivision (formerly Division I-AA). Participating schools are located in the Northeastern United States.

The Northeast Conference has expanded seven times since 1981. The expansions and additions from the original charter members were in 1985 (Monmouth University, which left in 2013), 1989 (Mount St. Mary's University), 1992 (Rider University, which left in 1997), 1997 (Central Connecticut State University), 1998 (Quinnipiac University and the University of Maryland, Baltimore County which respectively left in 2013 and 2003), 1999 (Sacred Heart University) and 2008 (Bryant University). The Northeast Conference's ranks was largest at 12 in 2008 with the addition of Bryant University,[4] but dropped to 10 in 2013 with the departure of Monmouth and Quinnipiac for the MAAC.

Men's lacrosse became the league’s 23rd sport for the 2011 season.[5] The number of sports dropped to 22 after the 2012–13 school year, when the conference dropped field hockey. The departure of Monmouth and Quinnipiac to become all-sports members of the Metro Atlantic Athletic Conference (MAAC) in July 2013 gave the MAAC four full members that sponsored the sport; the other two were NEC single-sport affiliates Rider and Siena. The MAAC then decided to add field hockey as a sponsored sport for the 2013 season,[6] and all of the NEC's remaining field hockey programs eventually joined the MAAC except for Saint Francis (PA), which joined the Atlantic 10 Conference.

There are also seven affiliate members which compete in football, men's lacrosse, and women's bowling.

* - The University of Baltimore's intercollegiate athletics were dropped following their departure from the NEC. 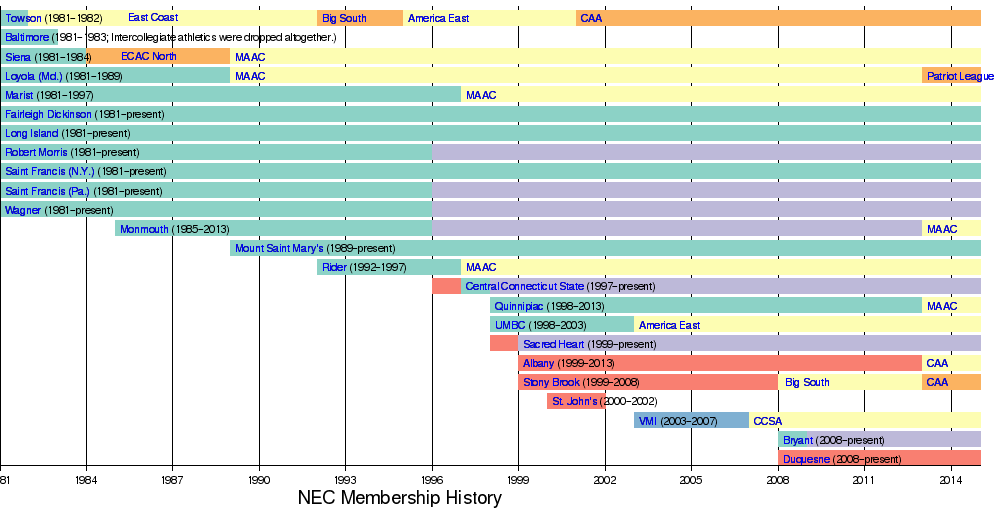 Before the 2013 departure of Monmouth and Quinnipiac, the NEC had 6 rivalry matchups in the conference; which is most prevalent during NEC's men's and women's basketball "Rivalry Week." The concept of playing back-to-back games against a local rival the same week is the only one of its kind among the nation's 31 NCAA Division I conferences. The pre-2013 NEC rivalries are as follows (with the current NEC team listed first in the matchups that are now non-conference):

The NEC Commissioner's Cup was instituted during the 1986-87 season with Long Island winning the inaugural award. Cup points are awarded in each NEC sponsored sport. For men's and women's basketball, men's and women's soccer, women's volleyball, football, women's bowling, softball, men's and women's lacrosse, and baseball, the final regular season standings are used to determine Cup points. Starting with the 2012-13 season, the Conference began awarding three bonus points to the NEC Tournament champion in those sports. In all other sports, points are awarded based on the finish at NEC Championship events.