Devolution referendums in Northern England were proposed under provisions of the Regional Assemblies (Preparations) Act 2003. Initially, three referendums were planned, but only one took place. The votes concerned the question of devolving limited political powers from the UK Parliament to elected regional assemblies in North East England, North West England and Yorkshire and the Humber respectively.

On 4 November 2004, voters in the North East rejected the proposal by 77.9% on a turnout of 49%, which halted the government's proposed referendums in the North West and Yorkshire and the Humber which were postponed and then dropped.

The Labour government attempted to introduce English regional assemblies, to be directly elected. The London Assembly was the first of these, established following a referendum in 1998, in which public and media attention was focused principally on the post of Mayor of London.[1] Ken Livingstone, the first directly elected Mayor of London, saw the London Assembly as a recreation of the Greater London Council, which he had led before it was abolished in the 1980s.[2] 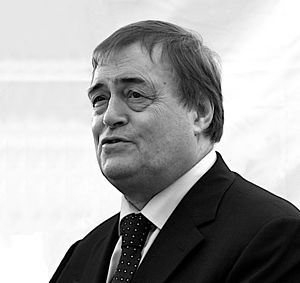 John Prescott, the key proponent of the assembly plans

The draft bill would have given the assemblies the following powers: 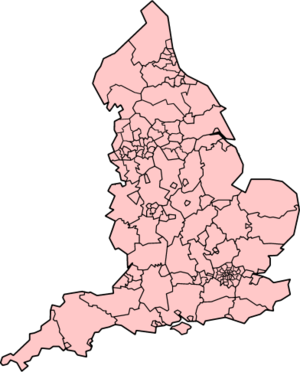 The counties and unitary authorities of England, if "yes" and option 2 is chosen in all referendums.

The creation of regional assemblies was to be tied to abolition of the existing two-tier structure for local government in these regions; and its replacement with a uniform system of unitary authorities. In areas that had two-tier government (Cheshire, County Durham, Cumbria, Lancashire, North Yorkshire, Northumberland), voters were to be asked which pattern of unitary government they would like to see.

Two options were proposed by the Boundary Committee for each county in the review area – generally consisting of a single unitary authority for the entire county, or a break-up into smaller authorities which are larger than the existing districts. It was recommended that ceremonial counties be left untouched in most cases. This recommendation was broadly (with one minor alteration in West Lancashire) accepted by the Office of the Deputy Prime Minister.

Voting was to take place on a per-county council-area basis, except that the Cumbria and Lancashire votes would have been run as one – since it would be impossible to have option 1 in one and option 2 in another.

Any changes as a result of the North East referendum would probably have come into effect on 1 April 2006 – to give time for preparation, and taking into account 1 April as the traditional day of local government reform in the UK.

In Lancashire and Cumbria the proposals for multiple unitary authorities were very similar to those proposed by the Redcliffe-Maud Report in 1969. This proposed authorities for North Cumbria based in Carlisle, and one for Morecambe Bay covering Barrow-in-Furness and Lancaster for the north of the region. In central Lancashire there were to be divided into four authorities based on Blackpool, Preston, Blackburn and Burnley. The area of West Lancashire was to be given to Merseyside and included with Southport in a district.

The options were as follows:

Yorkshire and the Humber

On 4 November 2004, in a turnout of almost 48% using a postal ballot, voters in the North East decisively rejected the proposed regional assembly.[4][5] The reasons for this result are varied, however it is felt[by whom?] that the regional power would have been concentrated in an Assembly situated in Newcastle upon Tyne.[citation needed] which given the strong historic rivalries between urban centres in the North-East may have caused resentment from the people of Sunderland and Middlesbrough. Notwithstanding this, in the Newcastle upon Tyne local council area itself the majority of votes cast were against the proposal. It was also felt that not enough of a case had been put forward for the necessity of the Assembly, and it was feared that it would add another layer of politicians and public servants, thereby increasing taxes for the citizens of the areas affected.[6]

The related votes in Northumberland and County Durham on local government changes became moot, though new single merged unitary authorities were later established based on the county council areas (i.e. Option A in each case) as part of the 2009 structural changes to local government in England. The votes had been:

North West England and Yorkshire and the Humber

Similar referendums had been planned in North West England and Yorkshire and the Humber. These were postponed on 22 July due to issues with all-postal ballots – there were many allegations of fraud and procedural irregularities. Following the rejection of the proposal in the north east of England the Deputy Prime Minister John Prescott at the time, ruled out holding further referendums in other regions for the foreseeable future.[7]