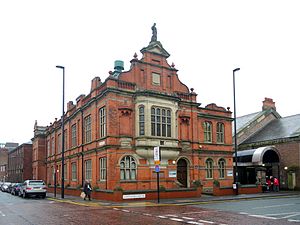 The Northumberland Miners' Association was a trade union in the United Kingdom.

The union was founded in 1864 to represent coal miners in Northumberland, following the collapse of a short-lived union covering both Northumberland and Durham miners. Originally named the Northumberland Miners' Mutual Confident Association, it aimed for respectability, requiring high subscriptions and avoiding strikes.[1] It did not affiliate to the national body, the Miners' Federation of Great Britain, until 1907. In 1945, this became the National Union of Mineworkers, and the association became its Northumberland Area.