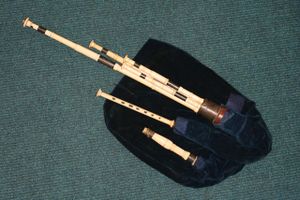 These Northumbrian smallpipes were made by John Dunn, and belonged to Robert Bewick. They have an inscription on the dronestock ferrule stating their provenance. It is likely that this simple chanter is not the original, which was probably keyed.

The Northumbrian smallpipes (also known as the Northumbrian pipes) are bellows-blown bagpipes from Northeastern England, particularly Northumberland and Tyne and Wear. In a survey of the bagpipes in the Pitt Rivers Museum, Oxford University, the organologist Anthony Baines wrote: "It is perhaps the most civilized of the bagpipes, making no attempt to go farther than the traditional bagpipe music of melody over drone, but refining this music to the last degree."[1]

The instrument consists of one chanter (generally with keys) and usually four drones. The cylindrically-bored chanter has a number of metal keys, most commonly seven, but chanters with a range of over two octaves can be made which require seventeen or more keys, all played with either the right hand thumb or left little finger. There is no overblowing employed to get this two octave range, so the keys are therefore necessary, together with the length of the chanter, for obtaining the two octaves.

A detailed account of the construction of Northumbrian smallpipes written by William Alfred Cocks and Jim F. Bryan[2] was published in 1967 by the Northumbrian Pipers' Society; it was very influential in promoting a revival of pipemaking from that time. This is now out of print, however. Another description, by Mike Nelson, is currently available.[3] These two accounts differ rather in their objectives, as Cocks and Bryan was based on descriptions of existing sets, notably by Robert Reid, Nelson being a description of his own design.

The earliest known description of such an instrument in Britain is in the Talbot manuscript[4] from about 1695. The descriptions of bagpipes mentioned in this early source are reproduced in[5] One of these instruments was a bellows-blown 'Bagpipe, Scotch', with three drones, whose keyless chanter had a one-octave range from G to g, with each note being sounded by uncovering a single hole, as in the modern instrument. This seems to have been a closed-ended chanter, for the lowest note is sounded by uncovering the lowest finger-hole – there was no bell-note, sounding with all holes covered; further, Talbot did not give the bore of the chanter, suggesting that it could not easily be measured.[6] The three drones were in unison with the lowest note, G, of the chanter, the D a fourth below it, and G, an octave below. It has been argued that such instruments were derived from mouth-blown German three-drone bagpipes.[7] These instruments seem to have been well-established in Northumberland by the early 18th century; many of the tunes in the William Dixon manuscript are suitable for such simple chanters, and a painting[8] of Joseph Turnbull, Piper to the Duchess of Northumberland, in Alnwick Castle, shows him with such a set.

The first of these were probably made by John Dunn, and the design was subsequently developed further by Robert Reid and his son James.

In practice, beginning players find that the seven key chanter, with a range of D to b, is sufficient for playing most of the traditional piping repertoire. Such a chanter, made by Robert Reid, is shown below – the four views show respectively: 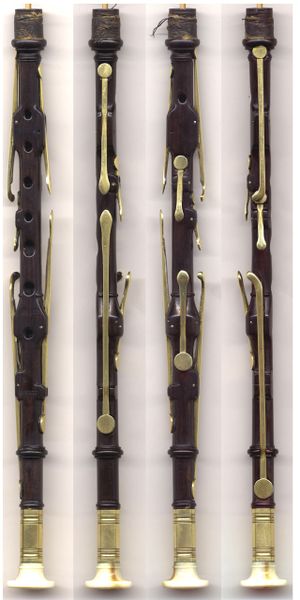 Chanters with more keys permit the playing of tunes with a wider range or with more chromatic notes, and allow access to much of the fiddle repertoire.

The chanter has a double reed, similar in construction to an oboe reed. This leads to a distinctive sound, rich in higher harmonics. As the bore is cylindrical, the odd harmonics are greatly predominant.

Traditionally, the chanter has been pitched somewhere between F and F sharp, older instruments often being close to modern F sharp. Several modern makers prefer to produce pipes pitched at what Northumbrian pipers refer to as F+, a pitch where the nominal G sounds approximately twenty cents sharp of F natural. This nominal G, however, is always notated as G. Nowadays, chanters are available anywhere from D to G, F+ being the commonest for solo or ensemble piping, but G being the most popular for playing ensemble with other instruments. Pipes with a tonic of F# are used for solo performance by several pipers now, being brighter in tone than those in F+, without being 'squeaky'.

There are usually four drones on a set of Northumbrian pipes, mounted in parallel in a common stock. These are tunable, and three will usually be tuned to the tonic, dominant and octave tonic, the other one being shut off. Like the chanter, these have a narrow cylindrical bore. Unlike the chanter, though, the reeds have a single blade; they are either cut from a single tube of cane, or else a strip of cane in a metal body.

As well as a tuning slide for precise adjustment of tuning, each drone will usually possess one or two 'bead holes' allowing its pitch to be raised by a tone or two, therefore allowing the piper to play in different musical keys, but still generally using the tonic, dominant and octave tonic combination of drone harmony.

Sets with five or even six drones have been made since the 19th century (to allow ease of retuning); however these are not common and generally specifically commissioned.

Only three drones are usually sounded at once, tuned for instance to G, D and g if the tonic of the tune is G. Sets sometimes have thumb-operated drone switches, allowing players to change key without stopping playing. Occasionally, though rarely, other tunings have been used, for example Tom Clough[10] recommended G, c, g, suitable for tunes in C major, or D, A, d, a, for some tunes in D major.

The earliest bagpipe tunes from Northumberland, or indeed from anywhere in the British Isles, are found in William Dixon's manuscript from the 1730s.[11] Some of these can be played on Border pipes or an open-ended smallpipe like the modern Scottish smallpipes, but about half the tunes have a single octave range and sound well on the single-octave, simple, keyless Northumbrian pipe chanter. These tunes are almost all extended variation sets on dance tunes in various rhythms – reels, jigs, compound triple-time tunes (now known as slip jigs), and triple-time hornpipes.

At the beginning of the 19th century the first collection specifically for Northumbrian smallpipes was published, John Peacock's Favorite Collection. Peacock was the last of the Newcastle Waits (musical watchmen), and probably the first smallpiper to play a keyed chanter. The collection contains a mixture of simple dance tunes, and extended variation sets. The variation sets, such as Cut and Dry Dolly are all for the single octave keyless chanter, but the dance tunes are often adaptations of fiddle tunes – many of these are Scottish, such as Money Musk. A pupil of Peacock, Robert Bewick, the son of Thomas Bewick the engraver, left five manuscript notebooks of pipetunes; these, dated between 1832 and 1843, are from the earliest decades in which keyed chanters were common, and they give a good early picture of the repertoire of a piper at this stage in the modern instrument's development.[12] Roughly contemporary with this is Lionel Winship's manuscript, dated 1833, which has been made available in facsimile on FARNE; it contains copies of the Peacock tunes, together with Scottish, Irish, and ballroom dance tunes. Both these sources include tunes in E minor, showing the d sharp key was available by this date.

As keyed chanters became more common, adaptations of fiddle music to be playable on smallpipes became more feasible, and common-time hornpipes such as those of the fiddler James Hill became a more significant part of the repertoire. The High Level is one. Many dance tunes in idioms similar to fiddle tunes have been composed by pipers specifically for their own instrument – The Barrington Hornpipe, by Thomas Todd, written in the late 19th century, is typical. Borrowing from other traditions and instruments has continued – in the early-to-mid 20th century, Billy Pigg,[13] and Jack Armstrong (The Duke of Northumberland's Piper) for instance, adapted many tunes from the Scottish and Irish pipe and fiddle repertoires to smallpipes, as well as composing tunes in various styles for the instrument.

Although many pipers now play predominantly dance tunes and some slow airs nowadays, extended variation sets have continued to form an important part of the repertoire. Tom Clough's manuscripts contain many of these, some being variants of those in Peacock's collection. Other variation sets were composed by Clough, such as those for Nae Guid Luck Aboot the Hoose which uses the extended range of a keyed chanter.

Modern orchestral pieces for the smallpipes

Primarily known as a virtuoso player of the English concertina, Alistair Anderson also plays Northumbrian smallpipes and has composed many tunes on and for the instrument. His compositions for groups of instruments have explored a greater range of harmonies than was traditionally associated with the smallpipes' repertoire, and he has collaborated with musicians such as jazz trombonist Annie Whitehead as well as writing the Shivering Stone suite which he performed with the Lindsay String Quartet.

Kathryn Tickell (a protegée of Anderson's in her youth) has composed many virtuoso pieces for the smallpipes and has explored an even wider range of collaborations; besides The Chieftains and The Boys of the Lough, she has worked with the Penguin Café Orchestra, percussionist Evelyn Glennie, jazz saxophonist Andy Sheppard and Sting, as well as having had a modern classical piece, Kettletoft Inn, composed for her by Sir Peter Maxwell Davies.[14]

In 2008 she composed a suite for the BBC Promenade Concerts for the London Sinfonietta, Muzsikas and Folkestra.[15] More recently, Kathryn has collaborated with pianist Joanna MacGregor and the Nash Ensemble, playing new compositions based on traditional Northumbrian tunes by Howard Skempton, Peter Maxwell Davies and Michael Finnissy.[16]

The traditional style of playing on the instrument is to play each note slightly staccato. Each note is only sounded by lifting one finger or operating one key. The aim is to play each note as full length as possible, but still separate from the next – 'The notes should come out like peas'. The chanter is closed, and thus briefly silent, between any two notes, and there is an audible transient 'pop' at the beginning and end of a note.

For decoration, it is common to play short grace notes preceding a melody note. Some pipers allow themselves to play these open-fingered, and hence not staccato, and Billy Pigg was able to get great expressive effects in this way – 'You should be able to hear the bairns crying'. But 'choyting' (the complex open-fingered gracing after the manner of Highland piping) is generally frowned on, and Tom Clough made a point of avoiding open-fingered ornament altogether, considering open-fingering 'a grievous error'. Several pipers play in highly close-fingered styles, Chris Ormston and Adrian Schofield among them; even among those such as Kathryn Tickell who use open fingering for expression, the close-fingered technique is the basis of their playing.

There are a substantial number of recordings of the smallpipes currently available, covering the whole range of archive, commercial and non-commercially presented music. Re-issues of historically significant recordings of the pipes from the 20th century include: