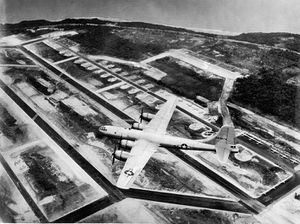 Northwest Field is a former World War II airfield on Guam in the Mariana Islands. It was closed in 1949 and is unused.

Northwest Field was constructed in 1944–45 near Ritidian Point on the northwest end of the island of Guam as a base for Twentieth Air Force B-29 Superfortresses to carry out the strategic bombing campaign against the Japanese Home Islands. Construction was accomplished by the Army Air Corps 1865th Aviation Engineering Battalion and United States Navy Seabees. Deployed ground echelon personnel also assisted in construction, prior to the arrival of their group's air echelon.

The field ultimately had two runways, the north and south runways. The south runway was the first to be completed. However, when the first 315th aircraft were deployed to Guam, the south runway was still under construction, and they had to land at nearby North Field (which eventually became today's Andersen AFB). When the main air echelons of the 16th and 501st Bomb Groups arrived the south runway was complete, but the taxiways were not. Aircraft had to be towed to their parking spaces over the rough coral. By the time the air echelons of the 331st and 502nd Bomb Groups arrived, both runways were complete. The 331st Bomb Group used the ramp space in the center of the base, the 502nd Bomb Group used the area on the east side, and the 16th and 501st Bomb Groups used ramp space on the west side.

The 315th Bomb Wing was unique as its groups flew the B-29B Superfortress, the only true variant of the B-29 ever manufactured. These aircraft were actually stripped-down versions of the normal B-29, bereft of the General Electric gun system and a variety of other components, in order to save weight and increase bomb-carrying capacity. The resultant unladen weight of 69,000 pounds was a vast improvement, lessening the strain on engines and airframe and enabling the payload to be increased from 12,000 to 18,000 pound ordnance. In addition, the 502nd and all of the other 315th groups were equipped with the new AN/APQ-7 "Eagle" radar sets, which gave a much clearer presentation of ground images through a wing-shaped radar vane slung beneath the fuselage. It also gave a biplane effect in appearance. The "Eagle" was the product of the Massachusetts Institute of Technology's Eagle radar development group. It had been designed especially for night missions.

During World War II this special antenna and equipment for precision night radar missions was so secret that no B-29s were ever shown with it, and there are no actual official photographs in existence. The only armament on these aircraft was in the tail, where two .50 caliber machine guns were installed. Missions had to be planned and prepared so that briefing material could be slanted from the radar point of view.

Its groups flew "shakedown" missions against Japanese targets on Moen Island, Truk, and other points in the Carolines and Marianas. Bombing missions commenced against targets in the Japanese homeland on 26 June 1945 when the wing damaged the Utsube River oil refinery at Yokkaichi. Thereafter, oil targets in Japan served as the wings primary targets during the summer of 1945.

On 14 August 1945, nine days after the Atomic Bomb attacks on Hiroshima and Nagasaki, 143 B-29 aircraft from the 315th Bomb Wing left Northwest Field on a secret mission. The mission was the longest continuous mission ever attempted by Twentieth Air Force, a distance 3,760 miles (6,050 km) and a duration of 17 hours. The mission was to destroy the largest remaining oil reserves in Japan at Akita. After holding for a long time, they finally lifted off at 4:42 local time. They had a secret recall code. It was "Apple", but the recall never came. Near Chichi-jima Japanese radar picked them up and shortly thereafter Tokyo went black, expecting a strike. A total of 132 aircraft reached the primary target and accomplished their mission. All aircraft returned safely, although the aircraft were down to their last gallons of gasoline, and 13 had to land in Iwo Jima to get fuel in order to make it back.

The 315th was ordered to fly this mission for several crucial reasons:

The attack by the B-29s achieved its desired purpose with the Japanese military, and President Harry S. Truman announced the official end of the Pacific War as the B-29s were returning to Northwest Field. It was the last combat mission flown by the United States Army Air Forces during World War II.

When hostilities ended, the wing's B 29s carried relief supplies to Allied prisoner of war camps in Japan and Manchuria before moving to other bases in April 1946. The airfield was also used as a facility for inactivating various air force units after the war.

In the postwar era, Northwest Field (later, Northwest Guam AFB), was used by the 20th Fighter Wing, 23d Fighter Group (23d Fighter Wing after 16 August 1948) between 10 October 1946 and 3 April 1949, where the group flew training, interception, and island defense missions with F-47 Thunderbolts until the base was closed due to fiscal reasons.

Today the wartime airfield is all but abandoned, although the runways are used occasionally by rotary-wing aircraft from nearby Andersen Air Force Base for training purposes. Most of the wartime taxiways and revetments still exist and the two airfields are still linked by taxiways. In 2008, Northwest Field was undergoing a rehabilitation and construction effort costing more than $200 million to provide barracks, vehicle facilities, simulators, classrooms, armories, warehousing and training sites for highly specialized forces. A total of 89 projects encompass the building of 80+ facilities that include roads, water tanks, pump houses, utilities as well as an electrical grid and substation.

The wartime taxiways that once allowed the dispersal of hundreds of B-29 heavy bombers are now overhung by jungle. But in a clever piece of innovation, they are being used for practicing defense and reaction against convoy ambushes. Other new construction includes weapons ranges, field exercise areas and an unused residential area that has been turned into an urban assault course.

The south runway has been opened for helicopter and air-drop operations and may eventually be used as a C-130 landing site.