From Infogalactic: the planetary knowledge core
Jump to: navigation, search
File:Logo of the Nobel Peace Prize.jpg 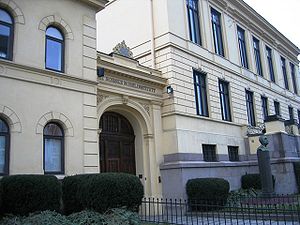 The Norwegian Nobel Institute, where the committee holds its meetings

The Norwegian Nobel Committee (Norwegian: Den norske Nobelkomité) selects the recipients of the Nobel Peace Prize each year on behalf of Swedish industrialist Alfred Nobel's estate, based on instructions of Nobel's will.

Its five members are appointed by the Norwegian Parliament and today roughly represent the political makeup of that body. In his will, Alfred Nobel tasked the Parliament of Norway with selecting the winners of the Nobel Peace Prize. At the time, Norway and Sweden were in a loose personal union. Despite its members being appointed by parliament, the committee is a private body tasked with awarding a private prize. In recent decades, most committee members have been retired politicians.

The committee is assisted by the Norwegian Nobel Institute, its secretariat, and the committee holds their meetings in the institute's building, where the winner is also announced. The award ceremony, however, takes place in Oslo City Hall (since 1990).

Alfred Nobel died in December 1896, and in January 1897 the contents of his will were unveiled. It was written as early as in 1895.[1] In his will, it was declared that a Nobel Peace Prize should be awarded "to the person who shall have done the most or the best work for fraternity between nations, for the abolition or reduction of standing armies and for the holding and promotion of peace congresses",[2] and that some of Nobel's money was to be donated to this prize. The Nobel Foundation manages the assets.[3] The other Nobel Prizes were to be awarded by Swedish bodies (Swedish Academy, Royal Swedish Academy of Sciences, Karolinska Institutet) that already existed, whereas the responsibility for the Peace Prize was given to the Norwegian Parliament,[4] specifically "a committee of five persons to be elected" by it.[2] A new body had to be created—the Norwegian Nobel Committee.

Jurist Fredrik Heffermehl has noted that a legislative body could not necessarily be expected to handle a judicial task like managing a legal will. The task of a parliament is to create and change laws whereas a will can not be changed unless the premises are clearly outdated. However, this question was not debated in depth, out of contemporary fear that the donated money might be lost in legal battles if the body was not created soon.[5] On 26 April 1897 the Norwegian Parliament accepted the assignment and on 5 August the same year it formalized the process of election and service time for committee members.[6] The first Peace Prize was awarded in 1901 to Henri Dunant and Frédéric Passy.[3] In the beginning, the committee was filled with active parliamentarians and the annual reports were discussed in parliamentary sessions. These ties to the Norwegian Parliament were later weakened so that the committee became more independent. Accordingly, the name was changed from the Norwegian Nobel Committee to the Nobel Committee of the Norwegian Parliament (Norwegian: Det norske Stortings Nobelkomité) in 1901, but changed back in 1977.[6] Now, active parliamentarians cannot sit on the committee, unless they have explicitly stated their intent to step down shortly.[7]

Nonetheless, the committee is still composed mainly of politicians. A 1903 proposition to elect a law scholar (Ebbe Hertzberg) was rejected.[5] In late 1948, the election system was changed to make the committee more proportional with parliamentary representation of Norwegian political parties. The Norwegian Labour Party, which controlled a simple majority of seats in the Norwegian Parliament orchestrated this change.[8] This practice has been cemented, but sharply criticized.[9] There have been propositions about including non-Norwegian members in the committee, but this has never happened.[7]

In January 1944 an attempt by the Quisling government to take over the functions of the Nobel Committee led to the resignation of Jahn and other committee members. The Swedish consulate-general in Oslo formally took over the management of the Foundation's Oslo property on behalf of the Nobel Foundation.[12]

The current members are[13]