Nothe Fort /noʊð/ is a fort in Weymouth, Dorset, England. The fort is situated at the end of the Nothe Peninsula, which juts eastwards from the town of Weymouth, and Weymouth Harbour, into the sea to the north of ex-military Portland Harbour. The fort is located next to Nothe Gardens. The coastal defence was built between 1860 and 1872 by 26 Company of the Royal Engineers to protect Portland's harbour, which was then becoming an important Royal Navy base. Shaped like the letter D, the fort's guns covered the approaches to both Portland and Weymouth harbours. The design included bomb proof casemates for cannons arranged around the circular sides, and deep magazines beneath the straight, landward side.[1] The fort played an important role in World War II, when the harbour was used as base by the British and American navies.

In 1956 the fort was abandoned, and in 1961 it was purchased by the local council. It is now a museum. The fort remains one of the most well preserved forts of its kind in the country,[2] and the fort and its outer gateway has been a Grade II* listed building since June 1974.[3] Its fusee steps have been Grade II listed since November 2000. These are located within Nothe Gardens, linking the car park area down to the Nothe Parade - the quay of Weymouth's Harbour. The inclined tramway and steps were built circa 1860. The three flights of steps include a low flanking wall of rendered brick, on which are placed wrought-iron plate rails, forming an inclined tramway for trolleys with double-flange wheels. It was constructed for hauling trolleys transporting ammunition, spares and stores from the quay to Nothe Fort.[4] In October 1978, the Nothe Fort, tramway and searchlight battery at The Nothe, also became scheduled under the Ancient Monuments and Archaeological Areas Act 1979 as they appear to the Secretary of State to be of national importance.[5] 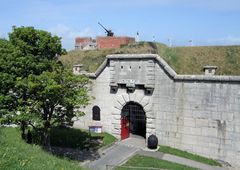 During 1860, a contract was given to a civil engineering contractor to build the Nothe Fort. The fort's first stage of construction was a sea wall which allowed a level site to be formed on the sloping ground at the end of the Nothe Peninsula. However, financial problems caused the wall and foundations to be left incomplete and both the responsibility and construction rights were given to 26 Company Royal Engineers in 1862. Although the upper earthen parapet was complete by 1869,[7] the fort was fully commissioned in 1872 at a total cost of £117,049. The fort was originally intended as a casemated battery with open earthen batteries. It was constructed on three levels, with 70 rooms off its basement level tunnel.[2] The bottom Magazine Level, was originally designed to store ammunition, the middle Gun Deck level, was designed to hold 12 heavy muzzle loaded cannons and accommodation for the soldiers manning the cannons. The top level formed the ramparts and featured a raised platform that could be used to fire weapons such as muskets and light muzzle loaded cannons during attacks.[8]

The first soldiers to be stationed at the fort were No. 2 Battery Royal Artillery (Tatton-Browns), who were a specialist gun emplacement unit trained to handle cannons up to 18 tons. The unit were given responsibility to install the original cannons, which were 2x64 pounders, 4x9-inch cannons and 6x10-inch cannons - all rifled muzzle loaded, with spiral grooves cut into the barrel. During the 1890s, seven of the cannons were replaced by 12.5-inch cannons, each weighing 38 tons, whilst being capable of firing 800-pound shells over a range of three and half miles.[9]

With the growth of Portland Harbour in the early 20th century, the area had become the main base for the Channel and later the Atlantic fleets, which caused Nothe Fort to remain an important defence of the naval base. With the introduction of breech-loading guns, the 12 RML cannons were removed and 3x6-inch guns were emplaced on the Ramparts. The new guns had greater accuracy and a better rate of fire. However extensive structural work had to be completed to support the weight of the guns. In addition to the structural work, there was a considerable amount of earthwork completed in order to protect the guns from enemy fire. In order to carry the 100-pound shells from the magazines, a series of hoists were installed.[10]

In 1938 alterations were completed to allow the fort to be used as a central anti-aircraft ammunition depot for the south west, which included installing an electrically operated hoist and the construction of a loading platform. Nothe Fort did not see combat until World War II, as the main threat was from the air. Beforehand, the guns had mainly been fired for training and competitive events. In July 1940, two ships entered the area and failed to identify themselves. As a result, they were fired at by the fort, however they immediately switched on their lights, revealing themselves to be refugees from the Channel Islands. During the Second World War, the fort was equipped with a Vickers pom-pom – sited on a platform built at the north-west corner of the fort, which was later replaced by a 40 mm Bofors. The main anti-aircraft guns on the peninsula were emplaced in Nothe Gardens. The anti-aircraft emplacement in Nothe Gardens used 4x3.7-inch Vickers.[11]

In 1956, the fort was abandoned as it was no longer required to protect the entrance of Portland Harbour. For five years afterwards, the fort was used to house naval stores and degaussing equipment. By 1961 the navy had no further use for the fort and it was sold to Weymouth and Melcombe Regis Borough Council. Under the ownership of the council the fort remained unoccupied and quickly became a victim of vandalised, before stating to fall into a state of dereliction. During this time, numerous ideas were suggested, including turning the fort into a luxury hotel complex. Work began to turn the fort into a hotel in 1971 but was soon abandoned shortly after and as a result no ideas materialised to save the fort from abandonment. Since 1980, the fort has slowly been restored and saved from dereliction as a result of work undertaken through the Manpower Services Scheme, along with the effort of interested individuals. The team of individuals were provided with assistance by the Weymouth Civic Society, and resulted in the fort becoming one of the best preserved forts of its kind. During the 1980s, as a result of the Cold War Period, the fort was used as a nuclear shelter for civil administration, and approximately a third of the Magazine Level was converted into command and accommodation areas, whilst also featuring protection from heavy blast doors.[12]

Following this, the fort was turned into a museum and tourist attraction, where it remains open to the public today. The fort is maintained by Weymouth Civic Society under a lease agreement with Weymouth and Portland Borough Council. Since the restoration of the fort, the structure was given a £1.8m lottery grant and a further £600,000 investment due to the involvement of local authorities and English Heritage. The fort is run by a team of five paid staff members and a dedicated team of 70 volunteers.[2] The Friends of Nothe Fort group has also been established to promote interest in the fort and to encourage its growth as a museum and tourist attraction.[13]

The museum itself features models, World War II memorabilia as well as original cannons and guns and British and American WWII vehicles, along with many displays, exhibits and audio visual facilities. The courtyard often holds community events such as military festivals, concerts, drama and cultural Olympiad.[14]

In 2007, the award winning fort was subject of a survey carried out by The National Lottery, who discovered that the fort was voted one of the spookiest locations in the UK; noting that staff members sometimes refuse to visit certain areas by themselves.[15] In 2012, hundreds of individuals applied to be volunteers at Weymouth's Nothe Fort for the Summer Olympics. The fort recruited 150 people to help out as marshals during the games, when 4,600 ticketed spectators a day flocked to the official view point for a fortnight. The fort and the gardens were closed off to the public for a two-week period during the games.[16]