From Infogalactic: the planetary knowledge core
Jump to: navigation, search
For other uses, see Noto (disambiguation). 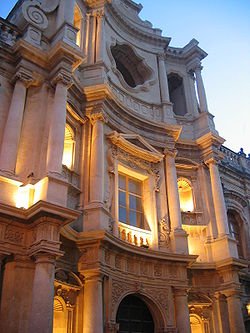 The church of St. Charles Borromeo. 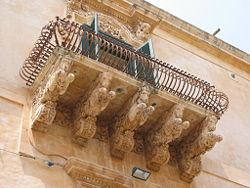 A balcony of the Villadorata palace. 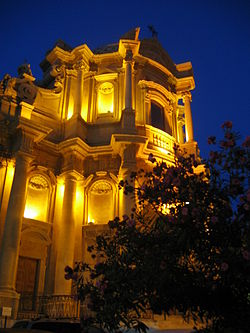 The church of San Domenico.

Noto (Sicilian: Notu; Latin: Netum) is a city and comune in the Province of Siracusa, Sicily, Italy. It is 32 kilometres (20 mi) southwest of the city of Siracusa at the foot of the Iblean Mountains and gives its name to the surrounding are,[1] Val di Noto. In 2002 Noto and its church were declared a UNESCO World Heritage Site.[2]

The older town, Noto Antica, lies 8 kilometres (5 mi) directly north on Mount Alveria. It was ancient Netum, a city of Sicel origin, left to Hiero II by the Romans by the treaty of 263 BCE and mentioned by Cicero as a foederala citilas (Verr. v. 51, 133), and by Pliny as Latinae conditionis (Hist. Nat. iii. 8. 14). According to legend, Daedalus stopped here after his flight over the Ionian Sea, as well as Hercules, after his seventh task.

A view of Noto Town Hall.

In the Roman era, it opposed praetor Verres. In 866 it was conquered by the Arabs, who elevated to a capital city of one of three districts of the island (the Val di Noto). In 1091, it became the last Muslim stronghold in Sicily to fall to the Christians.[3] Later it was a rich Norman city.

In the 16th and 17th centuries, the city brought forth several notable intellectual figures, including Giovanni Aurispa, jurists Andrea Barbazio and Antonio Corsetto, as well as the architect Matteo Carnelivari and the composer Mario Capuana. In 1503 king Ferdinand III gave it the title of civitas ingeniosa ("ingenious city"). In the following centuries, the city expanded enlarging its medieval limits; and new buildings, churches and convents were built. These, however, were all totally destroyed by the 1693 earthquake. The devastation of the city on Mount Alveria was accompanied by its economy[clarification needed], which relied mainly on agricultural products– vine, oil, cereals, rice, cotton and its renowned handicrafts.

The current town, rebuilt after the earthquake on the left bank of River Asinaro, was planned on a grid system by Giovanni Battista Landolina. This new city occupied a position nearer to the Ionian Sea. The presence of architects like Rosario Gagliardi, Francesco Sortino and others, made the new Noto a masterpiece of Sicilian Baroque, dubbed the "Stone Garden" by Cesare Brandi and is currently listed among UNESCO's World Heritage Sites. The new structures are characterized by a soft tufa stone, which under sunlight assumes a typical honey tonality. Parts of the cathedral suddenly collapsed in 1996, a great loss to Sicilian Baroque.

The city, which had lost its provincial capital status in 1817, rebelled against the House of Bourbon on 16 May 1860, leaving its gates open to Giuseppe Garibaldi and his expedition. Five months later, on 21 October, a plebiscite sealed the annexation of Noto to Piedmont.

In 1844, Noto was named a bishopric seat, but in 1866 suffered the abolition of the religious guilds, which were deeply linked to the city's structures and buildings.

Noto was freed from fascist dictatorship in July 1943. At the referendum of 1946, the Notinesi people voted in favour of the monarchy.

Noto is famous for its fine buildings of the early 18th century, considered among the main masterpieces in the Sicilian baroque style. It is a place of many religious buildings, there are several palaces, and many others. The old has mixed with the new, and a view from the top of a building on the hill will show the older buildings mixed with new and rebuilt architecture.

Palaces and other buildings

The remains of Noto's early inhabitants are almost entirely hidden beneath the ruins of the mediaeval town, except for three chambers cut into the rock. One is noted by an inscription in the library at Noto to have belonged to the gymnasium, while the other two were heroa (shrines of heroes). But explorations have brought to light four cemeteries of the third Sicel period, and one of the Greek period, of the 3rd and 2nd centuries BC. There are also catacombs of the Christian period and some Byzantine tombs.

About 6 kilometres (4 mi) south of Noto, on the left bank of the Tellaro (Helorus) stands a stone column about 10 metres (33 ft) high, which is believed to be a memorial of the surrender of Nicias. In the 3rd century BC, a tomb was excavated in the rectangular area which surrounds it, destroying apparently a pre-existing tomb. The later burial belongs to the necropolis of the small town of Helorus, 750 metres (2,460 ft) to the southeast, some remains of which have been discovered. It was a small advanced post of Siracusa, belonging probably to the 6th century BC. The Villa Romana del Tellaro is a Roman villa located south of Noto.

In the Noto neighbourhood, a 32-m radiotelescope was installed by the Istituto di Radioastronomia di Bologna as part of the Consiglio Nazionale delle Ricerche. It works in collaboration with a similar instrument in Medicina, Bologna.

The city has held an annual flower festival, the Infiorata, every May since the 1980s, lining the Corrado Nicolaci with floral mosaics.[4]