Notre Dame is a census-designated place[3] north of South Bend in St. Joseph County, Indiana, United States; it includes the campuses of three colleges: the University of Notre Dame, Saint Mary's College, and Holy Cross College. Notre Dame is split between Clay and Portage Townships. As of the 2010 census, its population was 5,973.[2] 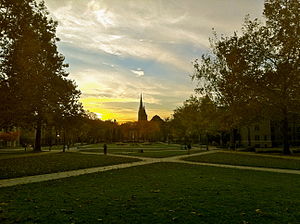 Campus of the University of Notre Dame

Holy Cross Village at Notre Dame is a retirement community offering continuing care in Notre Dame, Indiana. It is owned by the Brothers of Holy Cross and managed by the Franciscan Sisters of Chicago Service Corporation.

Notre Dame, Indiana is also the home of three major headquarters of Holy Cross religious communities. On the campus of Saint Mary's College the Sisters of the Holy Cross have their Congregational Administration. The Holy Cross College campus is the location of the Provincial Offices of two provinces of the Congregation of Holy Cross: the Midwest Province of Brothers and the Indiana Province of Priests and Brothers.

As unincorporated communities do not have a municipal government, Notre Dame, Indiana's government entities are the United States post office and the colleges' police forces. All colleges and universities in Indiana are entitled to an independent police force by law.[4] The University of Notre Dame also has its own fire department and supplies its own water and power utilities, except University Village and Cripe Street Apartments, Notre Dame's family and married housing get their electricity from AEP.

A post office has been in operation at Notre Dame since 1851.[5] The United States Postal Service Notre Dame Post Office is located in the southwest corner of Hammes Mowbray Hall, west of East Gate along Juniper Road on the University of Notre Dame campus.[6][7][8]