Nottingham Castle is a castle in Nottingham, England. It is located in a commanding position on a natural promontory known as "Castle Rock", with cliffs 130 feet (40 m) high to the south and west. In the Middle Ages it was a major royal fortress and occasional royal residence. In decline by the 16th century, it was largely demolished in 1649. The Duke of Newcastle later built a mansion on the site, which was burnt down by rioters in 1831 and left as a ruin. It was later rebuilt to house an art gallery and museum, which remain in use to this day. Little of the original castle survives, but sufficient portions remain to give an impression of the layout of the site.

There is some uncertainty whether a castle existed on the site before the Norman Conquest. If there was it would have been smaller and far less elaborate in design than the one that stood there afterwards, keeping in line with Anglo-Saxon architectural tradition.

The first Norman castle was a wooden structure and of a motte-and-bailey design, and was built in 1067, the year after the Battle of Hastings, on the orders of William the Conqueror. This wooden structure was replaced by a far more defensible stone castle during the reign of King Henry II, and was imposing and of a complex architectural design, which eventually comprised an upper bailey at the highest point of the castle rock, a middle bailey to the north which contained the main royal apartments, and a large outer bailey to the east.

For centuries the castle served as one of the most important in England for nobles and royalty alike. It was in a strategic position due to its location near a crossing of the River Trent; and it was also known as a place of leisure being close to the royal hunting grounds at Tideswell, which was the "Kings Larder" in the Royal Forest of the Peak, and also the royal forests of Barnsdale and Sherwood Forest. The castle also had its own deer park in the area immediately to the west, which is still known as The Park.

While King Richard I of England (known as "Lionheart") was away on the Third Crusade, along with a great number of English noblemen, Nottingham Castle was occupied by supporters of Prince John, including the Sheriff of Nottingham. In the legends of Robin Hood, Nottingham Castle is the scene of the final showdown between the Sheriff and the hero outlaw.[1]

In March 1194, a historic battle took place at Nottingham castle, part of the returned King Richard's campaign to put down the rebellion of Prince John. The castle was the site of a decisive attack when King Richard besieged the castle, after constructing some of the same types of siege machines he had used on the crusade. Richard was aided by Ranulph de Blondeville, 4th Earl of Chester, and David of Scotland, 8th Earl of Huntingdon. The castle surrendered after just a few days.[2]

Shortly before his 18th birthday, King Edward III, with the help of a few trusted companions, led by Sir William Montagu, staged a coup d'état at Nottingham Castle (19 October 1330) against his mother Isabella of France, and her lover, Roger Mortimer, 1st Earl of March. Both were acting as Regents during Edward's minority following their murder of his father Edward II at Berkeley Castle. William Montigu and his companions, were accompanied by William Eland, castellan and overseer of Mortimer's castle, who knew the location of a secret tunnel which would take them up to a locked door higher up in the castle to a normally locked door. In the dark of night on 19 October 1330, Montagu and his companions entered the tunnel, climbed up to the door, which had now been unlocked either by Edward III or a trusted servant, overpowered Mortimer, killing Mortimer's personal guards. Mortimer was bound and gagged, led out of the tunnel and arrested, along with Queen Mother Isabella. Mortimer was sent to the Tower of London, and hanged a month later. Isabella of France was forced into retirement at Castle Rising Castle. With this dramatic event, the personal reign of Edward began.[3] 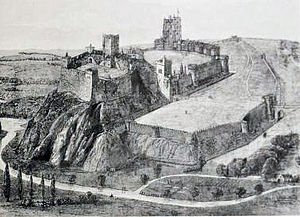 Edward III used the castle as a residence and held Parliaments. In 1346 King David II of Scotland was held prisoner. In 1365 Edward III improved the castle with a new tower on the west side of the Middle Bailey and a new prison under the High Tower. In 1376 Peter de la Mare, speaker of the House of Commons was confined in Nottingham Castle for having 'taken unwarrantable liberties with the name of Alice Perrers, mistress of the king'.[4]

After the residence of Joan maintenance was reduced. Only upon the Wars of the Roses did Nottingham Castle begin to be used again as a military stronghold. Edward IV proclaimed himself king in Nottingham, and in 1476 he ordered the construction of a new tower and Royal Apartments. This was described by John Leland in 1540 as:

'the most beautifulest part and gallant building for lodging... a right sumptuus piece of stone work.'

During the reign of King Henry VII the castle remained a royal fortress. Henry VIII ordered new tapestries for the castle before he visited Nottingham in August in 1511. By 1536 Henry had the castle reinforced and its garrison increased from a few dozen men to a few hundred.

In 1538 the Constable, the Thomas Manners, 1st Earl of Rutland, reported on the need for maintenance. A survey in 1525 stated that there was much 'dekay and ruyne of said castell' and

'part of the roof of the Great Hall is fallen down. Also the new building there is in dekay of timber, lead and glass'.

The castle ceased to be a royal residence by 1600 and was largely rendered obsolete in the 16th century by artillery. A short time following the outbreak of the English Civil War, the castle was already in a semi-ruined state after a number of skirmishes occurred on the site. At the start of the Civil War, in August 1642, Charles I chose Nottingham as the rallying point for his armies, but soon after he departed, the castle rock was made defensible and held by the parliamentarians. Commanded by John Hutchinson, they repulsed several Royalist attacks, and they were the last group to hold the castle. After the execution of Charles I in 1649, the castle was razed to prevent it being used again. 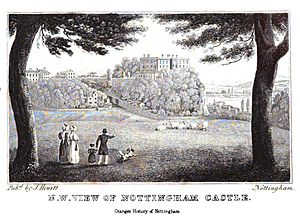 The castle from The History and Antiquities of Nottingham by James Orange, 1840

After the restoration of Charles II in 1660, the present 'Ducal Mansion' was built by Henry Cavendish, 2nd Duke of Newcastle between 1674 and 1679 on the foundations of the previous structure. Despite the destruction of the keep and fortifications of the upper bailey, some rock cut cellars and medieval pointed arches survive beneath the mansion, together with a long passage to the bottom of the rock, commonly known as Mortimer's Hole, through which guided tours take place, starting at the Castle and ending at Brewhouse Yard.

The mason for the Mansion was Samuel Marsh of Lincoln, who also worked for the Duke at Bolsover Castle. His designs are generally thought to have been strongly influenced by Rubens's engravings, in his book Palazzi di Genova.[5] The Duke's mansion is a rare surviving example in England of Artisan Mannerist architecture.

However, it lost its appeal to the later Dukes with the coming of the Industrial Revolution, which left Nottingham with the reputation of having the worst slums in the British Empire outside India. When residents of these slums rioted in 1831, in protest against the Duke of Newcastle's opposition to the Reform Act 1832 they burned down the mansion.

The original exterior stairs on the eastern façade of the mansion were subsequently demolished to create a parade ground for the Robin Hood Rifles.

The mansion remained a derelict shell until it was restored in 1875 by Thomas Chambers Hine, and opened in 1878 by the Prince of Wales, (later King Edward VII) as Nottingham Castle Museum,[6] the first municipal art gallery in the UK outside London. The new interiors ignored the original floor levels and fenestration to accommodate a top-lit picture gallery modelled after the Grand Gallery of the Louvre. The obtrusive new pitched roofs gave rise to adverse comment, and the walls were subsequently raised and topped by a pierced stone balustrade a few years later, changing the proportions of the façades. Behind the balustrade was a board walk above the leads, which originally allowed visitors to promenade around the roof to enjoy views over the city and the Trent valley.

The gatehouse of the medieval castle and much of the walling of the outer bailey was retained as a garden wall for the Ducal mansion. However, the northernmost part of the outer bailey was lost when an approach road was constructed in the 1830s for the development of The Park Estate on the former deer park, and this part of the castle site was later used for the expansion of Nottingham General Hospital. Most of the stonework of the outer fortifications which is now visible dates from an Edwardian reconstruction.

On Christmas Day 1996 a landslip, caused by a leaking water main, led to 80 tonnes of earth and retaining wall from the Restoration terrace next to the Mansion falling to the bottom of the Castle rock. This revealed some remains of the original castle foundations and the bedrock. After a lengthy controversy on the best conservation/restoration approach, the terrace was reinstated in 2005 with a traditional stone façade. This conceals a concrete structure, which allows the medieval masonry to remain accessible to visitors. The terrace offers great views to the south of the city, and appeared in the film Saturday Night and Sunday Morning, a groundbreaking film about the changing attitude of youth in a changing industrial society during the late 1950s.

A drawing of the Ducal Mansion appeared on millions of packets of rolling tobacco and cigarettes made by John Player & Sons, a Nottingham firm. Most packets had the phrases Nottingham Castle and Trade Mark bracketing the image of the non-fortress-like structure. This led the novelist Ian Fleming to refer to "that extraordinary trademark of a dolls house swimming in chocolate fudge with Nottingham Castle written underneath." in Thunderball in the knowledge that his British readers would be familiar with the image.

The ducal mansion is still in use as a museum and art gallery. It houses most of the City of Nottingham's fine and decorative art collections, galleries on the history and archaeology of Nottingham and the surrounding areas, and the regimental museum of the Sherwood Foresters.

Ticketing for the museum is now combined with admission to the Museum of Nottingham Life at Brewhouse Yard located nearby in five 17th-century cottages at the bottom of the castle rock.

Notable elements of the collections are:

In 2005, the Castle was the only venue outside the USA to host the 'Waking Dreams' touring exhibition of Pre-Raphaelite art. The show attracted visitors from all over Europe and brought the Castle Museum to international attention as a gallery space.

Nottingham Castle now plays host to a number of public annual events. This includes the Nottingham Beer Festival, the Robin Hood Pageant and even the world record breaking attempt for the most people dressed as Robin Hood in one place in 2008.