Nova (stylized NOVΛ) is an American popular science television series produced by WGBH Boston. It is broadcast on Public Broadcasting Service (PBS) in the U.S., and in more than 100 other countries.[1] The series has won many major television awards.[2]

The Nova programs have been praised for their good pacing, clear writing, and crisp editing. Websites accompany the segments and have also won awards.[3]

Nova was created on March 3, 1974 by Michael Ambrosino, inspired by the BBC 2 television series Horizon, which Ambrosino had seen while working in the UK. In the early years, many Nova episodes were either co-productions with the BBC Horizon team, or other documentaries originating outside of the United States, with the narration re-voiced in American English. Of the first 50 programs, only 19 were original WGBH productions, and the very first Nova episode, "The Making of a Natural History Film", was originally an episode of Horizon that premiered in 1972.[4] The practice continues to this day. All the producers and associate producers for the original Nova teams came from either England (with experience on the Horizon series), Los Angeles or New York.[5] Ambrosino was succeeded as executive producer by John Angier, John Mansfield, and Paula S. Apsell, actually as senior executive producer. 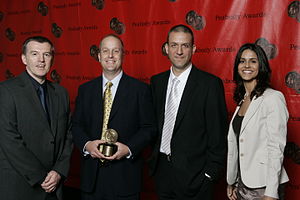 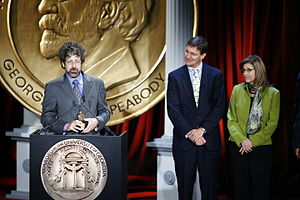 Nova has been recognized with multiple Peabody Awards and Emmy Awards. The series won a Peabody in 1974, citing it as "an imaginative series of science adventures," with a "versatility rarely found in television." Subsequent Peabodys went to specific episodes:[2][6]

The National Academy of Television Arts and Sciences (responsible for documentary Emmys) recognized the series with awards in 1978, 1981, 1983, and 1989. Julia Cort won an Emmy in 2001 for writing "Life's Greatest Miracle." Emmys were also awarded for the following episodes:[2]

Three episodes were nominated for the 2004 Emmys: