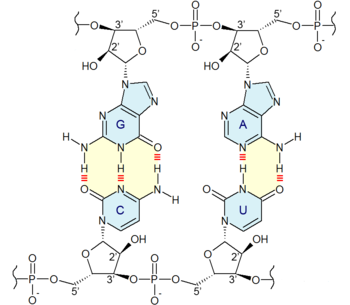 Base pairing in RNA. Nucleobases in blue (C paired with G, A paired with U). Hydrogen bonds in red. 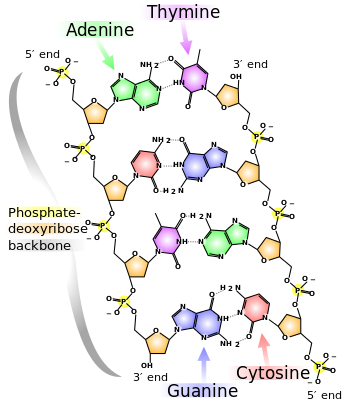 Nucleobases are nitrogen-containing biological compounds (nitrogenous bases) found linked to a sugar within nucleosides—the basic building blocks of deoxyribonucleic acid (DNA) and ribonucleic acid (RNA). Often simply called bases in genetics, their ability to form base pairs and to stack upon one another lead directly to the helical structure of DNA and RNA.

Use of the word base is historical, in reference to the chemical properties of nucleobases in acid-base reactions within the test tube, and is not especially important for understanding most of their biological functions.

The primary, or canonical, nucleobases are cytosine (DNA and RNA), guanine (DNA and RNA), adenine (DNA and RNA), thymine (DNA) and uracil (RNA), abbreviated as C, G, A, T, and U, respectively. Because A, G, C, and T appear in the DNA, these molecules are called DNA-bases; A, G, C, and U are called RNA-bases. Uracil and thymine are identical except that uracil lacks the 5' methyl group. Adenine and guanine belong to the double-ringed class of molecules called purines (abbreviated as R). Cytosine, thymine, and uracil are all pyrimidines (abbreviated as Y). Other bases, that do not function as normal parts of the genetic code, are termed non-canonical.

In normal spiral DNA the bases form pairs between the two strands: A with T and C with G. Purines pair with pyrimidines mainly for dimensional reasons - only this combination fits the constant width geometry of the DNA spiral. The A-T and C-G pairings are required to match the hydrogen bonds between the amine and carbonyl groups on the complementary bases.

Apart from adenine (A), cytosine (C), guanine (G), thymine (T) and uracil (U), DNA and RNA also contain bases that have been modified after the nucleic acid chain has been formed. In DNA, the most common modified base is 5-methylcytosine (m5C). In RNA, there are many modified bases, including those contained in the nucleosides pseudouridine (Ψ), dihydrouridine (D), inosine (I), and 7-methylguanosine (m7G).[1][2]

Hypoxanthine and xanthine are two of the many bases created through mutagen presence, both of them through deamination (replacement of the amine-group with a carbonyl-group). Hypoxanthine is produced from adenine, xanthine from guanine.[3] In similar manner, deamination of cytosine results in uracil.

In August 2011, a report, based on NASA studies with meteorites found on Earth, was published suggesting nucleobases (such as adenine, guanine, xanthine, hypoxanthine, purine, 2,6-diaminopurine, and 6,8-diaminopurine) may have been formed in outer space.[4][5][6]

These are examples of modified adenosine or guanosine.

These are examples of modified cytidine, thymidine or uridine.

A vast number of nucleobase analogues exist. The most common applications are used as fluorescent probes, either directly or indirectly, such as aminoallyl nucleotide, which are used to label cRNA or cDNA in microarrays. Several groups are working on alternative "extra" base pairs to extend the genetic code, such as isoguanine and isocytosine or the fluorescent 2-amino-6-(2-thienyl)purine and pyrrole-2-carbaldehyde.[citation needed]

In medicine, several nucleoside analogues are used as anticancer and antiviral agents. The viral polymerase incorporates these compounds with non-canonical bases. These compounds are activated in the cells by being converted into nucleotides; they are administered as nucleosides as charged nucleotides cannot easily cross cell membranes.[citation needed] At least one set of new base pairs has been announced as of May 2014.[7]