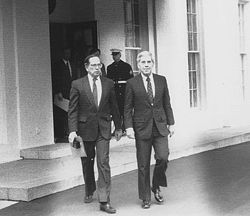 Senators Nunn and Lugar leave the White House in 1991 after briefing President George H. W. Bush on the Nunn–Lugar legislation

The Cooperative Threat Reduction (CTR) Program is an initiative housed within the Defense Threat Reduction Agency (DTRA). The CTR program is better known as the Nunn–Lugar Act based on the Soviet Nuclear Threat Reduction Act of 1991 which was authored and cosponsored by Sens. Sam Nunn (D-GA) and Richard Lugar (R-IN). According to the CTR website, "the purpose of the CTR Program is to secure and dismantle weapons of mass destruction and their associated infrastructure in former Soviet Union states."

CTR provides funding and expertise for states in the former Soviet Union (including Russia, Ukraine, Georgia, Azerbaijan, Belarus, Uzbekistan, and Kazakhstan) to decommission nuclear, biological, and chemical weapon stockpiles, as agreed by the Soviet Union under disarmament treaties such as SALT I. After nuclear warheads were removed by the FSU military from their delivery vehicles, Nunn-Lugar assistance provided equipment and supplies to destroy the missiles on which the warheads had been mounted, as well as the silos which had contained the missiles. Warheads were then destroyed in Russia, with the highly enriched uranium contained in them made into commercial reactor fuel which was purchased by the U.S. under a separate program.

In recent years, the CTR program has expanded its mission from WMD at the root source to protecting against WMD "on the move" by enhancing land and maritime border security in the former Soviet Union.

According to the CTR website, CTR has four key objectives:[1]

These objectives are pursued and achieved through a variety of programs.[2] Briefly, these include:

The CTR program is authorized by Title 22 of the United States Code, chapter 68a.[3]

The FY 2007 CTR Annual Report to Congress provides a status update on the program as a whole and individual initiatives. It also details future planned endeavors in each area.[4] 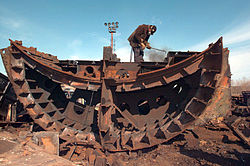 Disassembling of a Soviet Oscar-class submarine in Severodvinsk, 1996

Under CTR, the U.S. and recipient states have made considerable advancements in global security against the threat of WMD. For example, weapons deactivated and destroyed under this program include:

Other milestone results include:

One Nunn–Lugar site, Pavlograd, has dedicated itself beginning in June 2004 to the decommissioning of nuclear missiles without burning their solid rocket fuel, thus preventing dioxins from threatening the local environment and human population. The Pavlograd missile factory PMZ has converted to an advanced astronautics "Space Clipper" program.[citation needed]

One element of Nunn-Lugar established the Defense Enterprise Fund (DEF), intended to be a self-sustaining fund, creating profitable joint ventures with Soviet firms agreeing to convert from production of weaponry to other businesses. An August, 2000 DoD audit revealed that the fund's original $67 million was then worth around $31 million, that mismanagement was widespread, and that no plan for sustainability had been developed or implemented.[5] DEF was eventually closed, with its entire $67M grant apparently lost. A DEF employee, Matthew Maly, has claimed he was demoted and eventually fired, and "blacklisted", for his efforts to alert US officials to the fraud he alleged was taking place within the DEF in Russia.[6] DEF originally claimed to have employed 3,370 former Soviet WMD scientists. Matthew Maly disputed this figure, claiming that no more than 200 of them could have been employed. After an article in Defense Week, the figure was reduced to 1,250, but Matthew Maly kept the pressure on, until the figure was reduced to "there has been a clerical error".

In May 2009, Russia announced the opening of a major facility to decommission its chemical weapons reserves. Built near vast reserves of the former Soviet Union's weaponry at Shchuchye, Kurgan Oblast, in the Ural Mountains, the site is expected to destroy some 5,500 tons of chemical agents, including Sarin and VX. About one-third of the funding to build the plant, roughly $1 billion, was provided by CTR.[7]

In 2012, Russia declared that they would not extend the agreement.[8]

In June 2013, the United States and the Russian Federation signed a new bilateral framework on cooperative threat reduction intended to supersede the CTR. The new agreement is intended to reinforce the longstanding partnership on nonproliferation between these two nations and their activities in Russia and the Former Soviet Republics (FSR). "This new framework builds upon the success of the 1992 Agreement between the United States of America and the Russian Federation Concerning the Safe and Secure Transportation, Storage and Destruction of Weapons and the Prevention of Weapons Proliferation, commonly known as the Nunn-Lugar Cooperative Threat Reduction (CTR) Umbrella Agreement that expires today. This new bilateral framework authorizes the United States and the Russian Federation to work in several areas of nonproliferation collaboration, including protecting, controlling, and accounting for nuclear materials."[9]

In January 2015, Russian Federation representatives told their US counterparts that Russian would no longer accept US assistance in securing stored weapons-grade nuclear material but said they would continue the program on their own. Joint security work at numerous Russian sites and facilities was cancelled effective Jan. 1, 2015.[10]