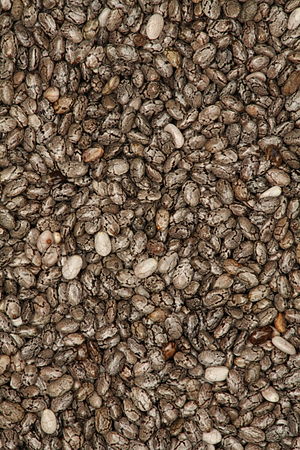 Chia is grown commercially for its seeds rich in α-linolenic acid.

Nutraceutical, a portmanteau of the words “nutrition” and “pharmaceutical”, was coined in 1989 by Stephen L. DeFelice, founder and chairman of the Foundation of Innovation Medicine.[1] The term is applied to products that range from isolated nutrients, dietary supplements and herbal products, specific diets and processed foods such as cereals, soups, and beverages.

Under Canadian law, a nutraceutical can either be marketed as a food or as a drug; the terms "nutraceutical" and "functional food" have no legal distinction,[2] referring to "a product isolated or purified from foods that is generally sold in medicinal forms not usually associated with food [and] is demonstrated to have a physiological benefit or provide protection against chronic disease."

The term "nutraceutical" has no meaning in US law.[3] Depending on its ingredients and the claims with which it is marketed, a product is regulated as a drug, dietary supplement, food ingredient, or food.[4][5]

In the global market, there are significant product quality issues.[6] Nutraceuticals from the international market may claim to use organic or exotic ingredients, yet the lack of regulation may compromise the safety and effectiveness of products. Companies looking to create a wide profit margin may create unregulated products overseas with low-quality or ineffective ingredients.

A market research report produced in 2012 projected that the worldwide nutraceuticals market would reach US$250 billion by 2018,[7] defining that market as "Dietary Supplements (Vitamins, Minerals, Herbals, Non-Herbals, & Others), and Functional Foods & Beverages"[8]

Nutraceuticals are products derived from food sources that are purported to provide extra health benefits, in addition to the basic nutritional value found in foods. Depending on the jurisdiction, products may claim to prevent chronic diseases, improve health, delay the aging process, increase life expectancy, or support the structure or function of the body.[9] 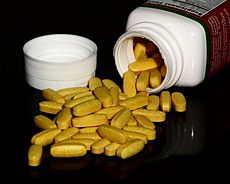 Dietary supplements, such as the vitamin B supplement shown above, are typically sold in pill form.

A dietary supplement is a product that contains nutrients derived from food products that are concentrated in liquid or capsule form. In the US, the Dietary Supplement Health and Education Act (DSHEA) of 1994 defined the term: “A dietary supplement is a product taken by mouth that contains a "dietary ingredient" intended to supplement the diet. The "dietary ingredients" in these products may include: vitamins, minerals, herbs or other botanicals, amino acids, and substances such as enzymes, organ tissues, glandulars, and metabolites. Dietary supplements can also be extracts or concentrates, and may be found in many forms such as tablets, capsules, softgels, gelcaps, liquids, or powders.”[10]

Dietary supplements do not have to be approved by the U.S. Food and Drug Administration (FDA) before marketing, but companies must register their manufacturing facilities with the FDA. With a few well-defined exceptions, dietary supplements may only be marketed to support the structure or function of the body, and may not claim to treat a disease or condition, and must include a label that says: “These statements have not been evaluated by the Food and Drug Administration. This product is not intended to diagnose, treat, cure, or prevent any disease.”

Functional foods are designed to allow consumers to eat enriched foods close to their natural state, rather than by taking dietary supplements manufactured in liquid or capsule form. Functional foods have been either enriched or fortified, a process called nutrification. This practice restores the nutrient content in a food back to similar levels from before the food was processed. Sometimes, additional complementary nutrients are added, such as vitamin D to milk.

Health Canada defines functional foods as “ordinary food that has components or ingredients added to give it a specific medical or physiological benefit, other than a purely nutritional effect.”[11] In Japan, all functional foods must meet three established requirements: foods should be (1) present in their naturally-occurring form, rather than a capsule, tablet, or powder; (2) consumed in the diet as often as daily; and (3) should regulate a biological process in hopes of preventing or controlling disease.[12] 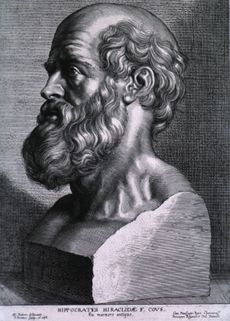 Considered a father of Western medicine, Hippocrates advocated the healing effects of food.

The Indians, Egyptians, Chinese, and Sumerians are just a few civilizations that have used food as medicine.[13] Hippocrates, considered by some to be the father of Western medicine, said that people should “Let food be thy medicine.”[citation needed]

The modern nutraceutical market began to develop in Japan during the 1980s. In contrast to the natural herbs and spices used as folk medicine for centuries throughout Asia, the nutraceutical industry has grown alongside the expansion and exploration of modern technology.[14]