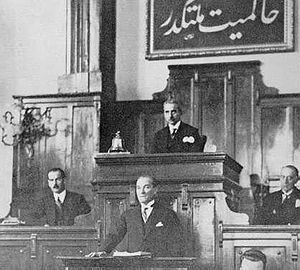 The Nutuk (Modern Turkish: Söylev; Speech) was a speech delivered by Mustafa Kemal Atatürk from 15 to 20 October 1927, at the second congress of Cumhuriyet Halk Partisi. The speech covered the events between the start of the Turkish War of Independence on May 19, 1919, and the foundation of the Republic of Turkey, in 1923. It is an important source for the study of Kemalism. It took thirty-six hours (on a 6 day span) to be read by Atatürk. Scholars have since identified the Speech as the foundation and model followed by Turkish historians for the official historiography of the Turkish Republic.[1][2]