Nyköping (Swedish pronunciation: [nyːˈɕœpɪŋ])[2] is a locality and the seat of Nyköping Municipality, Södermanland County, Sweden with 29,891 inhabitants in 2010.[1] The city is also the capital of Södermanland County. Including Arnö, the locality on the southern shore of the bay just a couple of kilometres from the city centre, Nyköping would have 33,762 inhabitants according to the same SCB source. Commonly, Arnö is referred to as a part of the city proper.

Nyköping literally translates as Newmarket into English. The prefix Ny is translated as New and köping is an old Swedish word for a market place and a commonly used suffix for cities in the south central region of the country. The city is located near the open Baltic Sea coast, and is regarded as a coastal location. Nyköping is also the home of Stockholm Skavsta Airport which is located less than 10 kilometres (6.2 mi) from the city centre. Nyköping is part of the wider area of the Mälaren Valley, being around 100 kilometres (62 mi) from inner Stockholm.

The area bears traces of settlers since around 2000 BC. In the early medieval age, around 1000 AD, Nyköping was a capital of one the many Swedish petty kingdoms.[citation needed] In the 13th century, construction on the Nyköping Fortress was begun; the following century it became the strongest fortress of the country. The coat of arms probably depicts the fortress, or one of its towers.[citation needed]

In 1317 the Nyköping Banquet took place, a renowned episode in Sweden's history, when King Birger of Sweden captured his two brothers as a revenge for earlier sufferings and had them imprisoned without food until they starved to death. (See Nyköpings gästabud.)

The earliest known charter dates from 1444[verification needed], making it one of the now defunct Cities in Sweden. In the 16th century Nyköping became the seat of Duke Charles who later became Charles IX of Sweden. With the status of a Royal residential seat, Nyköping was at its peak of development. 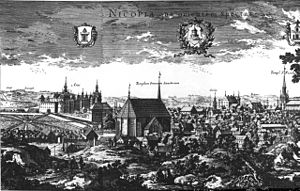 In 1665 large parts of the city including the fortress were damaged in a fire. The same thing happened again in 1719 when Russian troops invaded the city. It was then rebuilt with its current street plan.

Nyköping was industrialized relatively early compared to the rest of Sweden. In the early 19th century, textile industry was established, and the population soon rose as Nyköping's industry grew. In 1879, C.A. Wedholms mejerikärlsfabrik was founded, starting to produce milk churns. 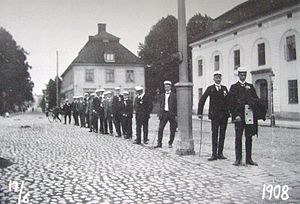 Students pose along the street in 1908.

Nyköping was the town where Nordiska Kompaniet had its furniture factory. The business created a spin-off named ANA, which licence-built American and English cars. The company was later purchased by Saab Automobile and led to SAAB becoming the largest employer in the town during the 1980s, as well as the relocation of the headquarters to Spelhagen. But when GM bought SAAB from Investor AB, the headquarters was moved back to Trollhättan and about two thousand lost their jobs.[3]

Nyköping lies about 100 kilometres (62 mi) south-west of capital Stockholm along the Baltic Sea. It is roughly 60 kilometres (37 mi) north-east of Norrköping, both cities being accessible by highway-divided motorway. It is also about 80 kilometres (50 mi) south of Eskilstuna; the largest settlement of the county. The northern areas of the city is on the exact same parallel of 58° 46' N as Canadian 'polar bear capital of the world' Churchill, demonstrating how warm the climate is in comparison in spite of its northerly parallel. The southern edge of the municipality also straddles the same parallel as the northernmost point of mainland Scotland at Thurso - that has a much more narrower of temperature. The southern edge of the municipality is the southernmost point of Svealand, the middle of Sweden's traditional three crown lands that once formed the country. The city is located at a few miles more southerly latitude than the country's northernmost west coast town of Strömstad.

Nyköping is the exodus of a small river named Nyköpingsån, which runs through the city centre, dividing the city into a natural eastern and western part. Due to the narrowness of the river, there are a full seven crossings available for automobile traffic, one of them being for the E4. For pedestrians and bikers, an additional seven bridges are available, and in addition to that there's also one bridge for train traffic. All automobile bridges except E4 also carry pedestrian sidewalks, which means transport is seldom made longer than the actual distance. There is also a small pedestrian bridge in an unpopulated nature reserve called Hållet that is very close to the E4 route. The small river Kilaån separates Nyköping and Arnö, with that river being even narrower. Also separating Nyköping and Arnö is the so-called Stadsfjärden (the City bay), which is a bay stretching around the Arnö peninsula down to the neighboring municipality of Oxelösund. Stadsfjärden is primarily used for tourist shipping and canoeing, with an internationally renowned canoeing stadium being situated along the northern shore. The port is much smaller than Oxelösund's and is primarily used for civil traffic, as opposed to cargo shipments and ferry traffic which is dominated by nearby ports of Oxelösund and Nynäshamn. This is due to the port being some 15 kilometres from open sea as opposed to Oxelösund's position on the edge of the peninsula. Even though Nyköping is a relatively flat city there are some hills in the northern parts of the town, barely reaching 50 metres altitude. The city centre is essentially just above sea level and doesn't rise above 20 metres altitude, although it contains hills surrounding it.

The area of Gumsbacken only carries a large shopping mall centre but is part of the city proper.

The rural localities of Sjösa, Bergshammar, Svalsta and Enstaberga located within 10 kilometres (6.2 mi) are connected to the city centre by cycle tracks with permanent floodlightning. In addition there is a nature and coastal area called Tjuvholmen east of the city centre that is part of the locality with many holiday homes. Tjuvholmen lacks an asphalted access road and is in general seen as a rural area in spite of its proximity to the city centre. East of Arnö on the southern shore there are similar areas such as Örstig which is connected by asphalt road and cycle tracks to Arnö and Nyköping. Other nearby rural areas on the southern shore include holiday home areas such as Linudden and Örstigsnäs and also the coastal camping place of Strandstugeviken. There is also lighted cycling tracks all the way south roughly 15 kilometres (9.3 mi) to neighbouring city Oxelösund, making pedestrian and biking transport to nearby areas effective and avoids potentially dangerous contacts with motor vehicles. 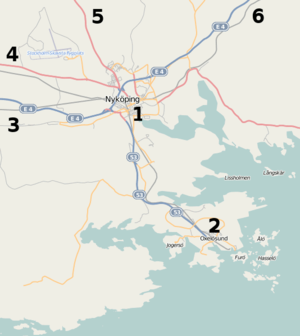 Coaches to Stockholm and Gothenburg are operated by Swebus.

A SJ X12 at the 'Nyköping C' railway station.

The city is located on a branch line to the Södra stambanan. Scheduled railway connections on the line is provided by SJ AB. These are mostly operated by Electric Multiple Units of which the SJ X40 is the most common. Commuter trains towards Norrköping may be operated by X12s. SJ does currently not operate any X 2000 services to Nyköping.

Stockholm-Skavsta Airport offers intra-European routes on Ryanair and Wizz Air. The airport is located about 10 kilometers outside of the city.

Nyköping has, along with the rest of Mälardalen, a relatively mild humid continental climate.[5] Winter averages around the freezing point during daytime with only the cold nights bringing the climate classification to humid continental rather than oceanic. Summer average highs are between 20 °C (68 °F) and 23 °C (73 °F) depending on month and weather patterns. However, both summers and winters have been significantly warmer and colder, respectively, than the averages. Temperatures over 30 °C (86 °F) are occasional but not overly common, with temperatures above 32 °C (90 °F) unknown in recent decades.[6] Winters are normally tempered by the Gulf Stream influence from the west and to a lesser degree the Baltic Sea to the east, but when cold air breaks through cold temperatures can occur, sometimes for a prolonged time.

The inland areas of the municipality are very much similar to the coastal areas, but the weather station at Skavsta shows lower summer mean temperatures than Oxelösund's, indicating that the inner city wider urban area nearer the water has milder nights year round. Both stations are within a meteorological relevant range from the city centre.

The city is yet to have a team in the major football or hockey leagues of Sweden, with stints in the second tiers being the greatest achievements for both sides.

Nyköping includes the cinema Biostaden which has Sweden's largest cinema screen.[9] The cinema was newly build from the ground in 2012.

In the city center, there is also a library named Nyöpings Stadsbibliotek (view picture below) which offers various bookclubs and activities for children. There is free Internet access and wifi for visitors. It has books of all genres, for all ages, and in many languages.[10]