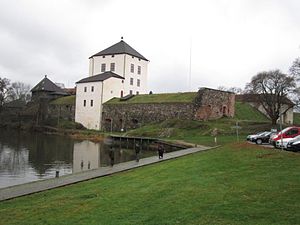 Present-day appearance of Nyköping Castle, in which the Dukes were starved to death.

The Nyköping Banquet (Swedish: Nyköpings gästabud) was King Birger of Sweden's Christmas celebration 11 December 1317 at Nyköping Castle in Sweden. Among the guests were his two brothers Duke Valdemar and Duke Eric, who later that night were imprisoned and subsequently starved to death in the dungeon of Nyköping Castle.

The dukes and brothers, Valdemar and Eric had earlier staged a coup against king Birger (Håtuna games). After the intervention of the Danish and Norwegian kings a settlement was reached in 1310 and Sweden was divided among the brothers into three sovereign states.

Seven years later the dukes Valdemar and Eric were invited as a sign of reconciliation to celebrate Christmas with King Birger and Queen Märta at Nyköping Castle. The banquet that was to go down in history was held on the night between 10 and 11 December 1317. The dukes' retinues were lodged not in the castle, but in the town of Nyköping, the pretext being lack of space. After both dukes had retired to bed, the king's drost Brunke (Johan von Brunkow) arrived with a company of crossbowmen and manacled them. The following morning, the dukes' retinue was also apprehended.

According to the Eric Chronicles, king Birger himself was present, reminding the dukes of the Håtuna Games:[1]

The dukes were imprisoned in the castle's dungeon. They knew that no mercy would be forthcoming from Birger so they had their wills drawn up after five weeks. These documents, dated 18 January 1318, survive today. One of the executors was Birger Persson. Soon thereafter both dukes died in the dungeon, according to tradition by drawn-out starvation. According to legend, king Birger threw the key to the dungeon into River Nyköpingsån. A large Medieval key was indeed found during the 19th century near the castle.

King Birger, however, had misjudged the political situation in the country. A rebellion broke out in 1318 against his rule, and he was forced to flee to Gotland, whence he soon had to continue his flight to Denmark.

The three-year-old son of Duke Eric, Magnus, was elected King in 1319 by the Stone of Mora in Uppland. King Birger's son Magnus resisted forces that tried to take the Castle of Nyköping, but Magnus was defeated and fled with the drost Brunke. They lost a sea action and were captured and executed in 1320. The drost Brunke was executed in Stockholm on the sandy ridge that has since been known as Brunkeberg. The deposed king Birger died 1321 in exile in Denmark.

Thus, of the royal family, remained only the old queen mother Helvig of Holstein, (spouse of Magnus Ladulås), the exiled Queen Märta, and the young king Magnus Eriksson, son of the dead Duke Eric.