O'Hare, located on the far northwest side of Chicago, Illinois, is one of the city's 77 official community areas. O'Hare International Airport is located within the boundaries of this community area. This community area is the only one that extends outside Cook County; the western edge (an area comprising the southwest part of the airport) is in DuPage County.

Due to it containing O'Hare International Airport as well as major roads such as Interstates 90, 190, and 294, and Illinois Routes 72 and 171, the O'Hare neighborhood is a major business center. Combined with nearby Rosemont, the region serves as an edge city, a major concentration of jobs, shopping, and entertainment. 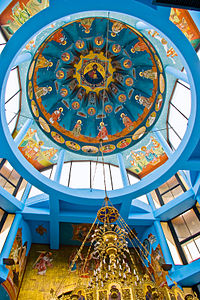 A number of prominent religious institutions are based in this Community area. St. Joseph the Betrothed Ukrainian Greek Catholic Church is located on Cumberland Avenue, with a branch of the Ukrainian Selfreliance Credit Union located adjacent to it. The largest Lutheran denomination in the United States, the Evangelical Lutheran Church in America, also has its headquarters in O'Hare.

The Consulate-General of the Dominican Republic is located at 8700 West Bryn Mawr Avenue.[3]

IGA,[4] U.S. Cellular,[5] True Value,[6] Bally Total Fitness, CareerBuilder, and uBid all have their headquarters in O'Hare.[citation needed] Nippon Cargo Airlines has its Americas headquarters on the property of O'Hare International Airport.[7]

Several airport hotels can also be found in the area.