From Infogalactic: the planetary knowledge core
Jump to: navigation, search
For other uses, see OTE (disambiguation). 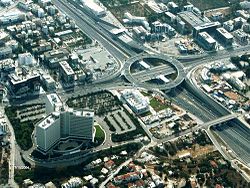 Hellenic Telecommunications Organization S.A. (Greek: Οργανισμός Τηλεπικοινωνιών Ελλάδος Α.Ε. Organismos Tilepikinonion Ellados AE), usually known by its Greek initials OTE, is the dominant telecommunications provider in Greece.[2] Along with its subsidiaries, is one of the largest telecom groups in South Eastern Europe. OTE Group offers broadband services, fixed and mobile telephony, high-speed data communications and leased lines services. In addition, the Group in Greece is involved in a range of activities, notably satellite communications, real-estate and professional training. At present, OTE companies employ about 30,000 people in 4 countries. Formerly a state-owned monopoly, OTE's privatization started in 1996 and is now listed on the Athens and London Stock Exchanges.[3]

Since July 2009 Deutsche Telekom is the largest shareholder of the company.

In September 2015, the company announced they are to discontinue the use of the OTE name and will instead adopt Cosmote as a uniform commercial brand. At this time, the company have chosen not to adopt the Deutsche Telekom brand under which name it operates in its Central and Eastern European operations.[4]

OTE was created in 1949 to bring several related public and private enterprises under one telecommunications umbrella. Prior to this, telephony, telegraphy, local and international connections were fragmented and ill-coordinated.

Up to 1998, the telecommunications market in Greece was a monopoly. The market was opened to competitors and OTE was gradually privatized. As a result, the Greek government currently holds 10% of the company's stock. Along with the rest of the telecoms market, OTE is regulated by the National Telecommunications and Post Commission (Εθνική Επιτροπή Τηλεπικοινωνιών και Ταχυδρομείων – EETT).

In 2007 Marfin Investment Group acquired 20% of the company, and in March 2008 sold it to Germany's Deutsche Telekom which later increased its stake to 25% plus one vote, matching that of the state.[6]

A wide portfolio of telephony products among which packages that combine the monthly fee with prepaid call time for local, national, long distance and mobile calls.

In 2011 OTE unified its pay TV services under the OTE TV umbrella. OTE TV is now available throughout Greece via Satellite or Via Conn-x (IPTV), and offers more than 70 channels, of which about 17 are in High Definition like OTE Sport. OTE TV Via Conn-x offers Video-on-Demand services, OTE Cinema-on-Demand and OTE Club-On-Demand.

2. Mobile Telephony
COSMOTE in Greece and its subsidiaries in Albania and Romania offer mobile telecommunications services.

3. Other operations
OTE subsidiaries offer a wide range of products and services, from telecommunications products for the maritime world (OTESAT Maritel) to professional training (OTEAcademy).

OTE’s access network is mainly based on copper (with over 5.3 million pairs) and on optical fibres that will gradually replace the copper network. Greece’s entire broadband network relies on OTE’s access network for all services provided by OTE and all alternate providers. The supported technologies are: ADSL/ADSL2/ADSL2+, NGA with FTTC/VDSL2 Architecture, Satellite broadband internet.

From 2008 to 2011, the company invested more than €500 million in networks and technological infrastructure.

The OTE Museum of Telecommunications opened up to the public in 1990. It is housed in a 1000 m2 privately owned OTE building, in the district of New Kifisia – Athens. The purpose of the Museum is the research, study and documentation of historical data pertaining to the evolution of telecommunications from ancient times to the present day. The Museum is a member of The International Committee for the Conservation of the Industrial Heritage (T.I.C.C.I.H.).

In the 2008 Siemens scandal, Siemens AG officials were accused of bribing local politicians and senior OTE officials to win a multimillion-dollar contract ahead of the Athens Olympic Games in 2004.

In July 2008, OTE filed a lawsuit against Siemens AG with the district court of Munich, Germany, seeking to compel Siemens AG to disclose the outcome of its internal investigations, with respect to allegations of undue influence and/or acts of bribery in connection with contracts concluded between Siemens AG and OTE from 1992 to 2006. OTE was granted access to the prosecutor’s files and in July 2010, OTE expanded its claim and requested payment of damages by Siemens AG of at least €57.07 million to OTE for alleged bribery payments to OTE employees.[17]

In 2010, the chairman of a special parliamentary committee examining allegations of bribery by Siemens AG was reported by local media to have sent a letter saying that OTE's management should face charges for dereliction of duty and for damaging the interests of the state. In June 2010, Greek prosecutors said that OTE's chief executive officer, Panagis Vourloumis, should face criminal prosecution, accused of corrupt practices in the maintenance of network contracts extended to telecom equipment makers Siemens AG, Anko and Greece's Intracom Holdings SA.[18][19] Panagiotis Vourloumis lodged an appeal to the Athens Court of Appeals which accepted his request to appear before the judges in person and to provide explanations for the case. In September 2011 the Court fully exonerated Vourloumis.[20]

In April 2011, Comverse Technology Inc. (CTI), headquartered in US, admitted to charges related to the payment of bribes to employees of OTE between 2003 and 2006 in order to obtain purchase orders. These bribes totalled $536,000.[21]

The management of OTE ordered an internal investigation to identify any possible involvement of executives and to protect the interests of the company.[22]

Area codes can be seen at List of dialing codes in Greece.