From Infogalactic: the planetary knowledge core
Jump to: navigation, search
This article is about the implement used for water-borne propulsion. For other uses, see OAR (disambiguation). 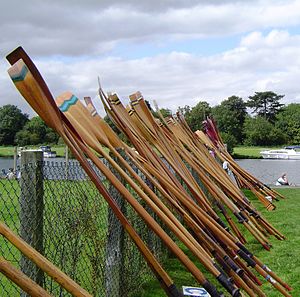 An oar is an implement used for water-borne propulsion. Oars have a flat blade at one end. Oarsmen grasp the oar at the other end. The difference between oars and paddles are that paddles are held by the paddler, and are not connected with the vessel. Oars generally are connected to the vessel by means of rowlocks or tholes which transmit the applied force to the boat. In this system (known as a second class lever)[1] the water is the fulcrum.

For thousands of years vessels were powered either by sails, or the mechanical work of oarsmen, or paddlers. Some ancient vessels were propelled by either oars or sail, depending on the speed and direction of the wind (see galley).

Rowing oars have been used since the early Neolithic period. Wooden oars, with canoe-shaped pottery, dating from 5000–4500 BC have been discovered in a Hemudu culture site at Yuyao, Zhejiang, in modern China.[2][3] In 1999, an oar measuring 63.4 cm (2 ft) in length, dating from 4000 BC, was unearthed at Ishikawa Prefecture, Japan.[4]

Oars have traditionally been made of wood. The form is a long shaft (or loom) with a flat blade on the end. Where the oar connects to the boat there is a "collar" which stops the oar slipping past the rowlock. Oars usually have a handle about 150mm long, which may be a material sleeve or alternatively an ovoid shape carved to fit the hands.

This is a normal, usually wooden oar to which weight has been added at the inboard end so that the blade end is noticeably lighter and easier for a rower to operate without fatigue. The two methods of adding weight are to either have a much larger section in the oar immediately next to the handle for a distance of about 450 millimetres (18 in) or to drill an 18-millimetre (0.71 in) hole inside the handle for a distance of about 150 millimetres (5.9 in) and add about 12 oz of lead secured by epoxy resin glue. For a 7-foot (2.1 m) oar the balance point is about 12 inches outboard of the rowlock. Often surplus wood is removed from the blade's width and thickness and at the neck between the blade and the shaft to further reduce outboard weight. This type of oar is much better for long-range rowing.[according to whom?]

The oars used for transportation come in a variety of sizes. The oars used in small dinghies or rafts can be less than 2 metres long. In classical times warships were propelled by very long oars that might have several oarsmen per oar. These oars could be more than a dozen metres long. 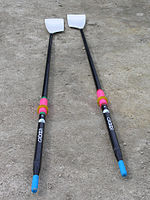 The oars used in competitive rowing are long (250–300 cm) poles with one flat end about 50 cm long and 25 cm wide, called the blade. The part of the oar the oarsman holds while rowing is called the handle. While rowing, the oars are supported by metal frames attached to the side of the boat called outriggers. Classic oars were made of wood, but modern oars are made from synthetic material, the most common being carbon fibre.

The sport of competitive rowing has developed a peculiar[dubious – discuss] tradition of using an oar as a memento of significant race wins. A 'trophy oar' is not presented at the end of the race as a more familiar precious metal cup might be, but rather given by the club, school or university that the winning crew or rower represented.

A trophy oar is a competition oar that has been painted in the club colours and has then had the details of the race signwritten on the face of the blade. The most common format would have the coat of arms or crest of the club or school positioned in the centre, with the crew names and the race details arranged around this.

Many older universities (Oxford and Cambridge would be prime examples, as well as Yale and Harvard) and their colleges have long histories of using the trophy oar and many examples are on display in club houses around the world.

The Norwegian municipalities of Fedje and Herøy have oars in their coat-of-arms.

Oars have been used to describe various animals with characteristics that closely resemble the said rowing implement. The members of the Family Regalecidae, elongated deep-sea fishes, are called oarfish because their body shape is similar to that of an oar.[citation needed] The hawksbill turtle's genus of Eretmochelys is derived from the Greek root eretmo, which roughly translates to oar. The turtle was so-named because of the oar-like shape of its front flippers.[5]