From Infogalactic: the planetary knowledge core
(Redirected from Oarlock)
Jump to: navigation, search

A rowlock on a rowing boat 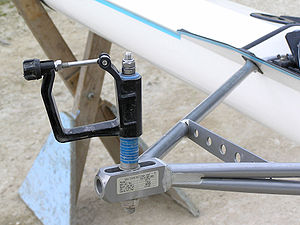 A rowlock used for the sport of rowing

A rowlock UK /ˈrɒlək/, sometimes spur (due to the similarity in shape and size), oarlock (US) or gate (AUS) is a brace that attaches an oar to a boat. When a boat is rowed, the rowlock acts as a fulcrum, and, in doing so, the propulsive force that the rower exerts on the water with the oar is transferred to the boat by the thrust force exerted on the rowlock.

Originally rowlocks were two wooden posts or thole pins that the shaft of the oar nestled between.

In sport rowing oarlocks were originally brass or bronze and open (no gate). With the advent of modern materials oarlocks are now injection moulded plastic and precision made to minimize play (slop) between the oar collar and the oarlock. The most recent sport racing oarlocks have a spring loaded feature to keeps the oar collar firmly against the pin at all times.

Oarlocks are technical pieces of equipment in sport rowing, holding the oar shaft and therefore the oar blade at the correct angle in the water to ensure optimum performance.

The Norwegian municipalities of Fosnes, Radøy and Tjøme have rowlocks in their coats-of-arms.