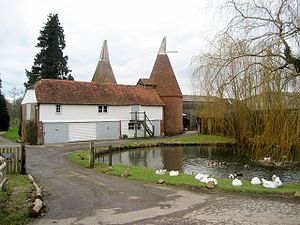 An oast, oast house or hop kiln is a building designed for kilning (drying) hops as part of the brewing process. They can be found in most hop-growing (and former hop-growing) areas and are often good examples of vernacular architecture. Many redundant oasts have been converted into houses.

They consist of two or three storeys on which the hops were spread out to be dried by hot air from a wood or charcoal-fired kiln at the bottom. The drying floors were thin and perforated to permit the heat to pass through and escape through a cowl in the roof which turned with the wind. The freshly picked hops from the fields were raked in to dry and then raked out to cool before being bagged up and sent to the brewery. The Kentish dialect word kell was sometimes used for kilns ("The oast has three kells.") and sometimes to mean the oast itself ("Take this lunchbox to your father, he's working in the kell."). The word oast itself also means "kiln".[1]

The earliest surviving oast house is that at Cranbrook near Tunbridge Wells which dates to 1750 but the process is documented from soon after the introduction of hops into England in the early 16th century. Early oast houses were simply adapted barns but, by the early 19th century, the distinctive circular buildings with conical roofs had been developed in response to the increased demand for beer. Square oast houses appeared early in the 20th century as they were found to be easier to build. In the 1930s, the cowls were replaced by louvred openings as electric fans and diesel oil ovens were employed.

Hops are today dried industrially and the many oast houses on farms have now been converted into dwellings. One of the best preserved oast house complexes is at The Hop Farm Country Park at Beltring.

The purpose of an oast is to dry hops. This is achieved by the use of a flow of heated air through the kiln, rather than a firing process.

The process for the traditional oast:

Hops were picked in the hop gardens by gangs of pickers, who worked on a piece work basis and earned a fixed rate per bushel. The green hops were put into large hessian sacks called pokes. These would be taken to the oast and brought into the stowage at first floor level. Some oasts had a man-powered hoist for this purpose, consisting of a pulley of some 5 feet (1.52 m) diameter on an axle to which a rope or chain was attached.

The green hops were spread out in the kilns. The floors were generally of 1 1⁄4-inch (32 mm) square battens nailed at right angles across the joists, placed so that there was a similar gap between each batten, and covered with a horsehair cloth. The hops would be spread some 12 inches (300 mm) deep, the kiln doors closed and the furnace lit. When the hops were judged to be dried, the furnace would be extinguished and the hops removed from the kiln using a scuppet, which was a large wooden framed shovel with a hessian base. The hops would be spread out on the stowage floor to cool, and would then be pressed into large jute sacks called pockets with a hop press. Each pocket contained the produce of about 150 imperial bushels (5,500 l) of green hops. It weighed a hundredweight and a quarter (140 pounds (64 kg)) and was marked with the grower's details, this being required under The Hop (Prevention of Fraud) Act, 1866.

The pockets were then sent to market, where the brewers would buy them and use the dried hops in the beer making process to add flavour and act as a preservative.

Oasts sometimes caught fire, the damage sometimes being confined to the kilns (Castle Farm, Hadlow), or sometimes leading to the complete destruction of the oast (Stilstead Farm, East Peckham in September 1983 and Parsonage Farm, Bekesbourne in August 1996).[2][3][4][5]

In many cases, early oasts were adapted from barns or cottages. A chapel at Frindsbury is also known to have been converted to an oast,[6] as was one at Horton, near Canterbury.[7]

This was done by building a kiln within the building, dividing it into three, the upper floor being used to receive the "green" hops, dry them and press the dried hops. Examples of this type of conversion can be seen at Catt's place, Paddock Wood and Great Dixter, Northiam.[3] 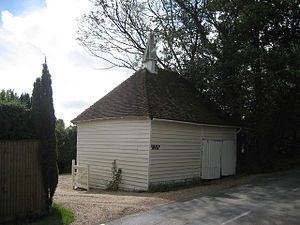 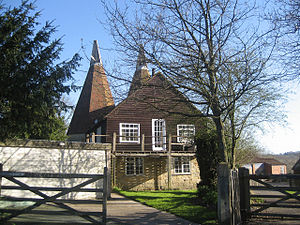 In the early nineteenth century, the traditional oast as we now know it started to be built. A two or three storey stowage, with between one and eight circular kilns. Kiln sizes generally ranged from 12 feet (3.66 m) to 18 feet (5.49 m) diameter, with a conical roof. Towards the end of the nineteenth century square kilns were constructed. These generally ranged in size from 16 feet (4.88 m) to 20 feet (6.10 m) square. An oast at Hawkhurst was built with two octagonal kilns, 15 feet (4.57 m) across the flats.[3] 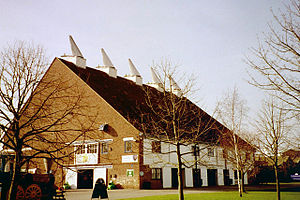 In the twentieth century, oasts reverted to the original form with internal kilns and cowls in the ridge of the roof (Bell 5, Beltring). These oasts were much larger and constructed of modern materials. Oasts were built as late as 1948 (Upper Fowle Hall, Paddock Wood) or 1950 (Hook Green, Lamberhurst).[3]

Very modern oasts bear little resemblance to traditional oasts. These vast buildings can process hops from several farms, as at Norton near Teynham, built in 1982.[3]

Many oasts were timber framed buildings, although some were built entirely in brick, or ragstone if this was available locally. Some oasts were entirely brick except the front and floors, which were timber.[3]

Kiln roofs, where the kiln was external, were generally built of a timber frame and covered in either peg tiles or slate. Some oasts had conical kiln roofs built of brick, these were covered it tar or pitch to keep them weatherproof. A few oasts had square kilns with brick roofs, again covered in tar or pitch. The top of the roof was open, and carried a cowl or louvred vent.[3]

Oasts were generally built of bricks, or local stone.

Bricks were the usual material for building the stowage, wood only being used in floors. Stone was sometimes used too (Madley). Some oasts had a cider mill on the ground floor of the stowage (Little Cowarne Court, Little Cowarne).[9] 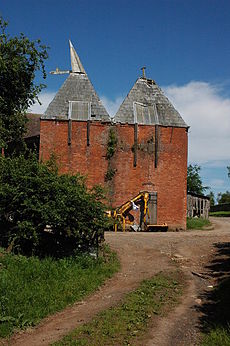 Bricks were the usual material for building the kilns. Stone was also used.[9]

Kiln roofs could be of timber, clad in tiles or slate, or of bricks. Brick kiln roofs could be tarred (Little Cowarne Court, Bromyard) or left bare (The Farm, Brockhampton).The roofs would be topped with a cowl (Upper Lyde Farm, Pipe-cum-Lyde), or a ridge ventilator (Kidley, Acton Beauchamp).[9]

Oasts can be found in the UK and abroad.

In Belgium, the main hop growing area is around Poperinghe and Ypres. The Czech Republic also has oasts. 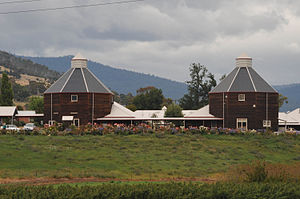 Oast houses are often called hop kilns in Australia. Tasmania is a major hop-growing area, as were parts of Victoria. During the 19th century, some of the Kentish hop growers emigrated, and took hops with them. Initially, Tasmanian oasts were converted from existing buildings (New Norfolk, Ranelagh) but later purpose built oasts were built (Valley Field, Bushy Park). These oasts had louvred ventilators instead of a cowl. The New Norfolk oast was converted from a watermill and is now a museum. Another location that has oasts was Tyenna. A modern oast of 400 by 200 feet (120 by 60 m) was built at Bushy Park in 1982.[4][10]

With the increasing mechanisation of the hop-picking process, many oasts fell into disuse. Some were demolished, others became derelict. Increasing demand for housing has led to many oasts being converted into houses. Local councils nowadays are generally much stricter on the aesthetics of the conversions than was the case before planning law came into being. Often kiln roofs have to be rebuilt, and cowls provided on converted oasts.[3]

The earliest example of an oast being converted to a house is Millar's Farm oast, Meopham, which was house-converted in 1903 by Sir Philip Waterlow.[3]

The National Trust owns an oast at Outridge, near Brasted Chart which has very rare octagonal cowls, one at (Castle Farm, Sissinghurst), converted to tea rooms and another at Batemans, Burwash which has been converted to a shop, with the cowl being replaced by a dovecot.[3][5][11][12][13]

In recent years, a number of buildings have been erected to look as though they were oasts, although in fact that is not the case.[4] Examples of this are: