Oath of office of the President of the United States

Before he enter on the Execution of his Office, he shall take the following Oath or Affirmation:—"I do solemnly swear (or affirm) that I will faithfully execute the Office of President of the United States, and will to the best of my ability, preserve, protect and defend the Constitution of the United States."[1] 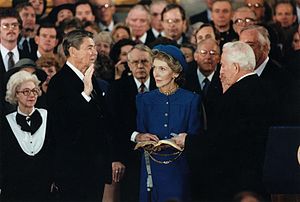 Administration of the oath

While the Constitution does not mandate that anyone in particular should administer the presidential oath of office, it is typically administered by the Chief Justice. There have been several exceptions, however. George Washington was sworn into office during his first inauguration, on April 30, 1789, by Chancellor of New York Robert Livingston.[2][3] William Cranch, chief judge of the U.S. Circuit Court, administered the oath to Millard Fillmore on July 10, 1850, when he became president after the death of Zachary Taylor.[4] Upon being informed of Warren Harding's death, while visiting his family home in Plymouth Notch, Vermont, Calvin Coolidge was sworn in as president by his father, John Calvin Coolidge, Sr., a notary public.[5][6] Most recently, Federal Judge Sarah T. Hughes administered the oath of office to Lyndon B. Johnson aboard Air Force One after John F. Kennedy's assassination on November 22, 1963.

Option of taking an oath or an affirmation

The Constitutional language gives the option to "affirm" instead of "swear". While the reasons for this are not documented, it may relate to certain Christians, including Quakers, who apply this scripture literally: "But above all things, my brethren, swear not, neither by heaven, neither by the earth, neither by any other oath: but let your yea be yea; and your nay, nay; lest ye fall into condemnation" (James 5:12, KJV).[7] Franklin Pierce was the only president known to use the word "affirm" rather than "swear." Herbert Hoover is often listed to have used "affirm" as well, owing to his being a Quaker, but a newsreel taken of the ceremony indicates that the words used were "solemnly swear."[8] Richard Nixon, who was also a Quaker, also swore, rather than affirm.[9][10]

Forms of administering the oath

There have been two forms of administering, and taking, the oath of office.

Under the first form, now in disuse, the administrator articulated the constitutional oath in the form of a question, and modifying the wording from the first to the second person, as in, "Do you George Washington solemnly swear ..." and then requested an affirmation. At that point a response of "I do" or "I swear" completed the oath.[citation needed]

It is believed that this was the common procedure at least until the early 20th century. In 1881, the New York Times article covering the swearing in of Chester A. Arthur, reported that he responded to the question of accepting the oath with the words, "I will, so help me God."[11] In 1929, Time magazine reported that the Chief Justice began the oath uttering, "You, Herbert Hoover, do you solemnly swear ...",[12] Hoover replied with a simple "I do".[13]

Under the second, and current form, the administrator articulates the oath in the affirmative, and in the first person, so that the President takes the oath by repeating it verbatim.[citation needed] Franklin Roosevelt, in 1933, stood silent as Chief Justice Charles Evans Hughes recited the entire oath, then repeated that oath from beginning to end himself.[14] By the time of Harry Truman's inauguration in 1949, the practice was for the Chief Justice to utter the oath in chunks, with the President-elect repeating those chunks, until the oath was completed.[15]

Many times the President-elect's name is added after the "I"; for example, "I, Franklin D. Roosevelt, do ... " Lyndon B. Johnson did not add his name when swearing his first oath of office after Kennedy's death since he was never asked to say his name; there is evidence that in all other inaugurations since Franklin D. Roosevelt's first, the name of the president was added to the oath.[citation needed]

By convention, incoming Presidents raise their right hand and place the left on a Bible or other book while taking the oath of office. In 1789, George Washington took the oath of office with an altar bible borrowed from the St. John's Lodge No. 1, Ancient York Masons lodge in New York and he kissed the Bible afterward.[16][17] Subsequent presidents up to and including Harry Truman, followed suit.[18] Dwight Eisenhower broke that tradition in 1953 when he said a prayer instead of kissing the Bible.[19]

Theodore Roosevelt did not use a Bible when taking the oath in 1901.[20] Both John Quincy Adams and Franklin Pierce [21] swore on a book of law, with the intention that they were swearing on the constitution.[22] Lyndon B. Johnson was sworn in on a Roman Catholic missal on Air Force One.[23] Harry Truman, Dwight Eisenhower, Richard Nixon, and Barack Obama each swore the oath on two Bibles.[20]

Further information: So help me God § United States and Oath

It is uncertain how many Presidents used a Bible or added the words "So help me God" at the end of the oath, or in their acceptance of the oath, as neither is required by law; unlike many other federal oaths which do include the phrase "So help me God."[24] There is currently debate as to whether or not George Washington, the first president, added the phrase to his acceptance of the oath. No contemporary sources mention Washington as adding a religious codicil to his acceptance.[25]

The historical debate over who first used "So help me God," is marred by ignoring the two forms of giving the oath. The first, now in disuse, is when the administrator articulates the constitutional oath in the form of a question, as in, "Do you George Washington solemnly swear...", requesting an affirmation. At that point a response of "I do" or "I swear" completes the oath. Without verbatim transcripts, the scant existing evidence shows this was the common procedure at least until the early 20th century. In 1865 the Sacramento Daily Union covered the second inauguration of Abraham Lincoln. Lincoln finished his oath with "So help me God," and he kissed the bible.[26] In 1881, the New York Times article covering the swearing in of Chester A. Arthur, reported that he responded to the question of accepting the oath with the words, "I will, so help me God".[11] In 1929, Time magazine reported that the Chief Justice began the oath uttering, "You, Herbert Hoover, do you solemnly swear..."[12] Hoover replied with a simple "I do".

A Federal lawsuit filed in the District of Columbia by Michael Newdow on December 30, 2008 contended the second, current form of administration, where both the Chief Justice and the President articulate the oath, appending "So help me God", to be a breach of the Constitutional instructions. The suit distinguishes between the words spoken by the administrator, which must conform to the exact 35 words of the Constitution, and the President, who has a right to add a personal prayer, such as "So help me God."[27]

Chief Justice Roberts' reply was that his "prompting" for these four extra-constitutional words were to be recited "after" the oath of office, and not as a part of the oath as claimed in the suit. After rendering the oath to President Barack Obama, Roberts prompted with a question "So help you God?", to which the President responded, "So help me God."[28]

The first Congress explicitly prescribed the phrase "So help me God" in oaths under the Judiciary Act of 1789 for all U.S. judges and officers other than the President. It was prescribed even earlier under the various first state constitutions[29] as well as by the Second Continental Congress in 1776.[30][31] Although the phrase is mandatory in these oaths, the said Act also allows for the option that the phrase be omitted by the officer, in which case it would be called an affirmation instead of an oath: "Which words, so help me God, shall be omitted in all cases where an affirmation is admitted instead of an oath."[32] In contrast, the oath of the President is the only oath specified in the Constitution. It does not include the closing phrase "So help me God", and it also allows for the optional form of an affirmation which is not considered an oath. In practice, however, most Presidents, at least during the last century, have opted to take the oath (rather than an affirmation), to use a Bible to do so, and also to close the oath with the customary phrase.

The earliest known source indicating Washington added "So help me God" to his acceptance, not to the oath, is attributed to Washington Irving, aged six at the time of the inauguration, and first appears 65 years after the event.[33]

The only contemporary account that repeats the oath in full, a report from the French consul, Comte de Moustier, states only the constitutional oath,[34] without reference to Washington's adding "So Help Me God" to his acceptance.

Evidence is lacking to support the claim that Presidents between Washington and Abraham Lincoln used the phrase "So help me God." A contemporaneous newspaper account of Lincoln's 1865 inauguration states that Lincoln appended the phrase "So help me God" to the oath.[35] This newspaper report is followed by another account, provided later in the same year after Lincoln's death (April 15, 1865), that Lincoln said "So help me God" during his oath.[36] The evidence pertaining to the 1865 inauguration is much stronger than that pertaining to Lincoln's 1861 use of the phrase. Several sources claim that Lincoln said "So help me God" at his 1861 inauguration, yet these sources were not contemporaneous to the event.[37][38] During the speech, Lincoln stated that his oath was "registered in Heaven",[39] something some have taken as indicating he likely uttered the phrase "So help me God." Conversely, there was a claim made by A.M. Milligan (a Presbyterian minister who advocated for an official Christian U.S. government) that letters were sent to Abraham Lincoln asking him to swear to God during his inaugurations, and Lincoln allegedly wrote back saying that God's name was not in the Constitution, and he could not depart from the letter of that instrument.[40][41]

Other than the president of the U.S., many politicians (including Jefferson Davis, sworn in as president of the Confederate States of America in 1861) used the phrase "So help me God" when taking their oaths.[42] Likewise, all federal judges and executive officers were required as early as 1789 by statute to include the phrase unless they affirmed, in which case the phrase must be omitted.[43]

Given that nearly every President-elect since President Franklin D. Roosevelt has recited the codicil, it is likely that the majority of presidents-elect have uttered the phrase[44] (as well as some vice presidents, while taking their oaths). However, as President Theodore Roosevelt chose to conclude his oath with the phrase "And thus I swear," it seems that this current of tradition was not overwhelmingly strong even as recently as the turn of the twentieth century. Only Franklin Pierce has chosen to affirm rather than swear.[45] It is often asserted that Herbert Hoover also affirmed, because he was a Quaker, but newspaper reports before his inauguration state his intention to swear rather than affirm.[46] 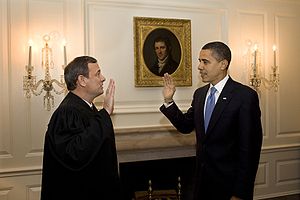 President Barack Obama being administered the oath of office by Chief Justice John Roberts for the second time, on January 21, 2009.

Retaking the oath of office

Seven presidents have repeated their oath of office, for different reasons:

From 1789 through 2013, the presidential oath of office has been administered by 15 Chief Justices, one Associate Justice, three federal judges, two New York state judges, and one notary public. The oath has been taken on 73 occasions by 43 people.