From Infogalactic: the planetary knowledge core
Jump to: navigation, search
This article is about West Indian religion and magic. For the racehorse, see Obeah (horse). For obeah within the context of Thelema, see Obeah and Wanga. For the West African monster, see Obia (folklore).

Obeah (sometimes spelled Obi, Obea, or Obia),[1] is a term used in the West Indies to refer to folk magic, sorcery, and religious practices developed among West African slaves, specifically of Igbo origin.[2] Obeah is similar to other Afro-American religions including Palo, Vodou, Santería, and Hoodoo. Obeah is practiced in Suriname, Cuba, Jamaica, Trinidad and Tobago, Dominica, Guyana, Grenada, Belize, The Bahamas, and other Caribbean nations.[3]

Obeah is associated with both benign and malignant magic, charms, luck, and with mysticism in general. In some Caribbean nations, Obeah refers to folk religions of the African diaspora. In some cases, aspects of these folk religions have survived through syncretism with Christian symbolism and practice introduced by European colonials and slave owners. Casual observation may conclude that Christian symbolism is incorporated into Obeah worship, but in fact may represent clandestine worship and religious protest.

During slavery, Obeah was directed against the European slave masters. However, with the end of slavery, Obeah became considered taboo, and the term has pejorative associations.[4]

In parts of the Caribbean where Obeah existed, slaves were taken from a variety of African nations with differing spiritual practices and religions. It is from these arrivals and their spiritualisms that Obeah originates. The theory of origin that is most accepted and is supported by the W. E. B. Du Bois Institute database[5] traces obeah to the dibia or obia (Igbo: doctoring)[6] traditions of the Igbo people.[7][8] Specialists in Obia (also spelled Obea) were known as Ndi Obia (Igbo: Obia people) and practised the same activities as the obeah men and women of the Caribbean like predicting the future and manufacturing charms.[2][9] Among the Igbo there were oracles known as ọbiạ which were said to be able to talk.[10] Parts of the Caribbean where Obeah was most active imported a large number of its slaves from the Igbo dominated Bight of Biafra.[5]

In another theory, the Efik language is the root of obeah where the word obeah comes from the Efik ubio meaning 'a bad omen'.[11] The last theory of the origin of Obeah lies with the Ashanti who called their priests Obayifoɔ and their practices Ɔbayi (pronounced "oh-beh-ah-yee", the word was an anglicized distortion like many other Akan words, e.g., "bɛsɛ" becoming "bissy", thus the pronunciation of "obeah") (Akan: witchcraft).[12] There is also evidence of Akan names among Obeah men of the Caribbean in the 17th and 18th centuries.[5] The Akan origin of Obeah has been criticised by several writers who hold that an Igbo origin is more likely.[13] However, in colonies where Bight of Biafra slaves were less represented and Akan were plenty (Suriname and Guyana), Obeah is thought to be more of a mixture of Akan and European Christian beliefs.[13]

Obeah came to mean any physical object, such as a talisman or charm, that was used for evil magical purposes.[14] Obeah incorporated various beliefs from the religions of later migrants to the colonies where it was present. Obeah also influenced other religions in the Caribbean, e.g. Christianity which incorporated some Obeah beliefs.[3]

In 'The Serpent Myth', William Wynn Westcott, one of the founders of the 19th century Golden Dawn magical order, claims "Ob was an Egyptian word for serpent' and is the source of the term 'Obeah'. 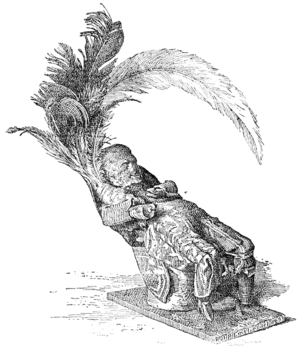 Obeah figure confiscated from a black man named Alexander Ellis on his arrest in suspicion of practicing as an 'obeah-man' in Morant Bay, Jamaica in 1887.[15]

The term 'obeah' is first found in documents from the early 18th century, as in its connection to Nanny of the Maroons, but discussion of it becomes more frequent when it was made illegal in Jamaica after Tacky's War, in which an obeahman provided advice to the rebels.

In 1787 a letter to an English newspaper referred to "Obiu-women" interpreting the wishes of the dead at the funeral of a murdered slave in Jamaica: a footnote explained the term as meaning "Wise-women".[16]

A continuing source of white anxiety related to Obeah was the belief that practitioners were skilled in using poisons, as mentioned in Matthew Lewis's Journal of a West India Proprietor. An anti-Obeah law passed in Barbados in 1818 specifically forbade the possession of "any poison, or any noxious or destructive substance".[17] A doctor who examined the medicine chest of an Obeah man arrested in Jamaica in 1866 identified white arsenic as one of the powders in it, but could not identify the others. The unnamed correspondent reporting this affirmed "The Jamaica herbal is an extensive one, and comprises some highly poisonous juices, of which the Obeah men have a perfect knowledge."[18]

During the mid 19th century the appearance of a comet in the sky became the focal point of an outbreak of religious fanatical millennialism among the Myal men of Jamaica. Spiritualism was at that time sweeping the English-speaking nations as well, and it readily appealed to those in the Afro-Caribbean diaspora, as spirit contact, especially with the dead, is an essential part of many African religions.

During the conflict between Myal and Obeah, the Myal men positioned themselves as the "good" opponents to "evil" Obeah.[19] They claimed that Obeah men stole people's shadows, and they set themselves up as the helpers of those who wished to have their shadows restored. Myal men contacted spirits in order to expose the evil works they ascribed to the Obeah men, and led public parades which resulted in crowd-hysteria that engendered violent antagonism against Obeah men. The public "discovery"[according to whom?] of buried Obeah charms, presumed to be of evil intent, led on more than one occasion to violence against the rival Obeah men.

Laws were passed that limited both Obeah and Myal traditions[20] but due to the outrages perpetrated by the mobs of Myalists, the British government of Jamaica sent many Myal men to prison[when?], and this, along with the failure of their millennialist prophecies[clarification needed].

Obeah in Trinidad and Tobago

One aspect of Obeah that is familiar to Trinidad and Tobago, though not all other nations where Obeah is practiced, is the Moko-Jumbie, or stilt dancer. Moko was a common word for Ibibio slaves[citation needed]. In the Trinidad and Tobago Obeah tradition. A Douen is a child who has died before being baptized, and is said to be forced to forever walk the earth at night in English-speaking regions of the Caribbean. Jewelry is made from deadly toxic red and black seeds called jumbies, jumbie eyes or jumbie beads (seeds of Abrus precatorius containing the lethal AB toxin abrin) in the Caribbean and South America. By contrast, the moko-jumbie of Trinidad and Tobago is brightly colored, dances in the daylight, and is very much alive. The moko-jumbie also represents the flip side of spiritual darkness, as stilt-dancing is most popular around holy days and Carnival.

Although 18th-century literature mentions Obeah often, one of the earliest references to Obeah in fiction can be found in 1800, in William Earle's novel Obi; or, The History of Three-Finger'd Jack, a narrative inspired by true events that was also reinterpreted in several dramatic versions on the London stage in 1800 and following.[21] One of the next major books about Obeah was Hamel, the Obeah Man (1827). Several early plantation novels also include Obeah plots. In Marryat's novel Poor Jack (1840) a rich young plantation-owner[22] ridicules superstitions held by English sailors but himself believes in Obeah.

The 20th century saw less actual Obeah in open practice, yet it still appears quite often in fiction and drama. The following is only a partial list: