Ocala (/oʊˈkælə/, oh-KA-lə) is a city located in Northern Florida. As of the 2013 census, its population, estimated by the United States Census Bureau, was 57,468, making it the 45th most populated city in Florida.[2]

It is the seat of Marion County[4] and the principal city of the Ocala, Florida Metropolitan Statistical Area, which had an estimated 2013 population of 337,362.[5]

Archeological investigation has revealed that the area was inhabited by varying cultures of indigenous peoples from as early as 6500 B.C., and there were two lengthy periods of occupation. The second lasted through 500 A.D. In early historic times, the Timucua inhabited the area.[citation needed]

Ocala is located near what is thought to have been the site of Ocale or Ocali, a major Timucua village and chiefdom recorded in the 16th century. The modern city takes its name from the historical village, the name of which is believed to mean "Big Hammock" in the Timucua language.[6] The Spaniard Hernando de Soto's expedition recorded Ocale in 1539 during his exploration through what is today the southeastern United States. Ocale is not mentioned in later Spanish accounts; it appears to have been abandoned in the wake of de Soto's attack.[citation needed]

In the late eighteenth and early nineteenth centuries, Creek people and other Native Americans, and free and fugitive African Americans sought refuge in Florida. The Seminole people formed. After foreign colonial rule shifted between Spain and Great Britain and back again, in 1821 the United States acquired the territory of Florida. After warfare to the north, in 1827 the U.S. Army built Fort King near the present site of Ocala as a buffer between the Seminole, who had long occupied the area, and white settlers moving into the region. The fort was an important base during the Second Seminole War and later served in 1844 as the first courthouse for Marion County.[citation needed]

The modern city of Ocala, which was established in 1849, developed the city around the fort site. Greater Ocala is known as the "Kingdom of the Sun".[7] Plantations and other agricultural development dependent on slave labor were prevalent in the region. Ocala was an important center of citrus production until the Great Freeze of 1894–1895.[citation needed]

Rail service reached Ocala in June 1881, encouraging economic development with greater access to markets for produce. Two years later, much of the Ocala downtown area was destroyed by fire on Thanksgiving Day, 1883. The city encouraged rebuilding with brick, granite and steel rather than lumber. By 1888, Ocala was known statewide as "The Brick City".[citation needed] 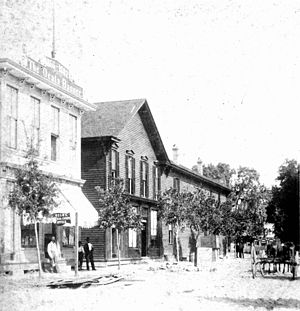 In December 1890, the Farmers' Alliance and Industrial Union, a forerunner of the Populist Party, held its national convention in Ocala. At the convention, the Alliance adopted a platform that would become known as the "Ocala Demands". This platform included abolition of national banks, promoting low-interest government loans, free and unlimited coinage of silver, reclamation of excess railroad lands by the government, a graduated income tax, and direct election of United States senators. Most of the "Ocala Demands" were to become part of the Populist Party platform.[citation needed]

The first thoroughbred horse farm in Florida was developed in 1943 by Carl G. Rose, who had come to Florida in 1916 from Indiana to oversee construction of the first asphalt road in the state. When he ran into problems with asphalt, he improvised and experimented with limestone, an abundant resource in the state which he realized supported good pasture for raising strong horses (limestone nurtures Kentucky's Bluegrass Region, long a center of thoroughbred horse farms). In 1943, Rose bought land along State Highway 200, at $10 per acre, which became Rosemere Farm. The next year one of his horses, Gornil, won at Miami's Tropical Park, becoming the first Florida-raised thoroughbred to win a Florida race.

Close on Rose's heels, entrepreneur Bonnie Heath set up his own thoroughbred farm, producing the state's first winner of the Kentucky Derby. Highways were named in Ocala after each of these men. Bonnie Heath Farm is now owned and operated by Bonnie Heath III and his wife Kim. Rosemere Farm was sold long ago, the large site redeveloped with retail center Paddock Mall and the College of Central Florida.

In 1956, the Ocala-area Thoroughbred industry received a boost when Needles became the first Florida-bred to win the Kentucky Derby. In 1978, Marion County-bred-and-raised Affirmed won the Triple Crown. Today, Marion County is a major world thoroughbred center with over 1200 horse farms, including about 900 thoroughbred farms, totaling some 77,000 acres (310 km2). Ocala is well known as a "horse capital of the world."[8]

Ocala is one of only five cities (four in the USA and one in France) permitted under Chamber of Commerce guidelines to use this title, based on annual revenue produced by the horse industry. 44,000 jobs are sustained by breeding, training, and related support of the equine industry, which generates over $2.2 billion in annual revenue. "Postime Farms" and Ocala serve as host to one of the largest horse shows in the country: H.I.T.S or "Horses in the Sun", a Dressage/Jumper event lasting about two months which generates some 6 to 7 million dollars for local Marion County economy each year. The show features classes for over 100 different breeds, including Tennessee Walker, Paso Fino, Morgan horse, SaddleBred, Draft horse and the American Quarter Horse. Other equine events in the area include cowboy mounted shooting by the Florida Outlaws, as well as endurance rides, barrel races, "extreme" cowboy events, jumper shows, trick shows, parades, draft pulls, rodeo events and more. 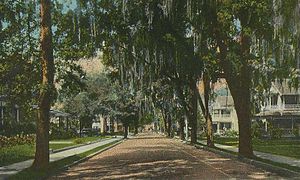 In the last decades of the twentieth century, the greater Ocala area had one of the highest growth rates in the country for a city its size. The population of Marion County in 2000 was more than 250,000, up from under 100,000 in 1975.

The original Fort King site was designated as a National Historic Landmark in 2004.

Ocala is governed by a five-member board of councillors and a mayor, all of which are elected on a nonpartisan basis. Its charter was written in the council-manager form, leaving the mayor with few powers other than vetoing legislation passed by the council and tending to some duties involving the police department. The city manager handles most administrative and financial matters.[11] Although a small majority of the city's registered voters are Democrats,[12] Ocala's politics match those of the rest of Marion County in that all of its elected legislators – with one exception – are registered Republicans. In the 2008 presidential election, John McCain carried both the city and the county, the latter by a landslide, despite losing Florida as a whole to Barack Obama by a narrow margin.[13] 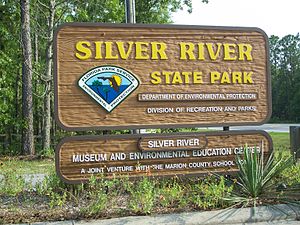 Ocala is located at Lua error in Module:Coordinates at line 668: callParserFunction: function "#coordinates" was not found..[14]

According to the United States Census Bureau, the city has a total area of 38.63 square miles (100.1 km2), all land. The surrounding farms are famous for their thoroughbred horses, in terrain similar to Kentucky bluegrass. Ocala is also known for nearby Silver Springs, Florida, site of one of the largest artesian spring formations in the world and Silver Springs Nature Theme Park, one of the earliest tourist attractions in Florida.

Marion County is also home to the Ocala National Forest which was established in 1908 and is now the second largest national forest in the state. The Florida Trail, also known as the Florida National Scenic Trail, cuts through Ocala National Forest.[15] Silver Springs State Park was formed as Silver River State Park in 1987, out of land the state purchased around the Silver Springs attraction to spare it from development. The state took over Silver Springs itself in 1993 and incorporated it into the park in 2013.[16]

Ocala has two distinct seasons: the dry season (October–May) and the wet season (June–September). During the dry season, there is almost uninterrupted sunshine with very little rainfall. In January, the morning low temperatures are often in the 30s and 40s, but the cloudless sunny weather typically warms the dry air up to near 70 by the afternoon. During the wet season, afternoon thunderstorms are a daily occurrence. These storms are often severe (unofficially, Ocala is known to have more cloud-to-ground lightning per square mile than any other city in the world). The typical morning low temperatures during the wet season are in the 70's and typical daytime high temperatures are in the 90s. Due to the city being relatively far away from the moderating influence of the Atlantic Ocean and the Gulf of Mexico, Ocala's summertime temperatures are often the highest in the state while winter temperatures are often the lowest compared to other cities on the peninsula.[citation needed]

Ocala is the headquarters of Emergency One, a worldwide designer and manufacturer of fire rescue vehicles.

According to Ocala's 2012 Comprehensive Annual Financial Report,[21] the top employers in the city are:

The Ocala Pumpkin Run Classic Car Show and Fall Festival takes place each year on the 400 acre Castro Farm just off of Hwy 27 and has become a premier destination car show hosting more than 1,000 classics and customs each year and spectators from all over the southeast. Marion County proclaimed October as ‘Ocala Pumpkin Run Month’ due to the impact the event has had on the community each year.[22]

Ocala was the headquarters of Taylor, Bean & Whitaker, formerly a 2,000-employee top-10 wholesale mortgage lending firm, and the fifth-largest issuer of GNMA securities, that ceased business operations in 2011 due to investigations relating to fraudulent activity.[23]

Ocala is home to the College of Central Florida, a member of the Florida College System, accredited by the Southern Association of Colleges and Schools Commission on Colleges. CF offers bachelor's degrees in Business and Organizational Management, Early Childhood Education, and Nursing, as well as associate degrees and certificates. The college offers specialty programs in equine studies, agribusiness, and logistics.[30] It also has one of 21 campuses of Rasmussen College, a Higher Learning Commission regionally accredited post secondary institution.[31][32] Webster University offers on-site, regionally accredited graduate degree programs in business and counseling at their Ocala Metropolitan Campus.[33]

Three of the eight libraries in the Marion County Public Library System are located in Ocala.[34] Those three libraries are: 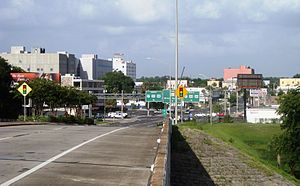 Several major highways pass through Ocala, including Interstate 75, U.S. Highway 27, U.S. Route 301, and U.S. Highway 441. Ocala was on the western leg of the historic Dixie Highway.

Ocala International Airport provides general aviation services to the community. Ocala Suntran provides bus service throughout select parts of the city. One of the major hubs for Suntran is the former Ocala Union Station, which served Amtrak trains until November 2004. Amtrak serves Ocala by bus connection to Jacksonville and Lakeland. Ocala is also served by Greyhound Bus Lines . 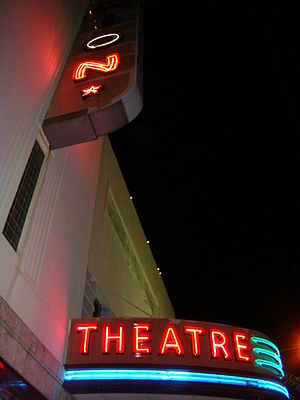 West Port High School offers an arts-affiliated magnet program known as MCCA (Marion County Center for the Arts), and it focuses on instructing students in the arts. It is one of the better known arts magnet programs in Florida.