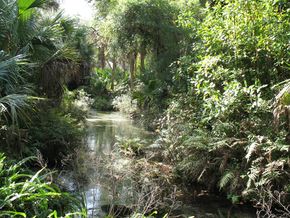 The Ocala National Forest ls the second largest nationally protected forest in the U.S. State of Florida. It covers 607 square miles (1,570 km2) of Central Florida. It is located three miles (5 km) east of Ocala and 16 miles (26 km) southeast of Gainesville. The Ocala National Forest, established in 1908, is the oldest national forest east of the Mississippi River[1] and the southernmost national forest in the continental U.S. The word Ocala is thought to be a derivative of a Timucuan Indian term meaning "fair land" or "big hammock". The forest is headquartered in Tallahassee, as are all three National Forests in Florida, but there are local ranger district offices located in Silver Springs and Umatilla.

The Ocala National Forest lies between the Ocklawaha and St. Johns Rivers in Central Florida. In descending order of land area it is located in parts of Marion, Lake, Putnam, and Seminole[citation needed] counties.

The Ocala National Forest is in the southeastern conifer forests and the Florida sand pine scrub ecoregions. Dry, sandy areas support Florida longleaf pine sandhills and Florida peninsula inland scrub. Longleaf pine sandhills are woodlands dominated by longleaf pine (Pinus palustris). Inland scrub consists of sand pines (Pinus clausa) growing amid shrublands of evergreen oaks. Both of these pine communities are sustained by frequent fires. The Ocala National Forest contains a high proportion of remaining inland scrub habitat and is noted for its sand pine scrub ecosystem. The forest contains the largest concentration of sand pine in the world as well as some of the best remaining stands of longleaf pine in central Florida. Where fire is absent, southern coastal plain oak domes and hammocks can grow. These are small stands of thick evergreen oaks.

The Ocala National Forest receives more visitors than any other national forest in the Sunshine State. Millions annually visit the forest, which is one of Central Florida's last remaining traces of forested land. The forest’s porous sands and largely undeveloped character provide an important recharge for the Floridan Aquifer. The Rodman Reservoir system forms most of the northern and north western border as part of the Ocklawaha River Basin.

The Ocala Forest is also known for having over 600 natural lakes and ponds. Between the river boundaries of this Forest lie central highlands, coastal lowlands, swamps, springs and hundreds of lakes and ponds. Near the Juniper Prairie Wilderness and Juniper Springs is "The Yearling Trail", the location where The Yearling was filmed.

The United States Navy's Pinecastle Bombing Range in the Ocala National Forest is the only place on the East Coast where the Navy can do live impact training. The Navy drops nearly 20,000 bombs a year at the site, a few hundred of which are live. The Pinecastle Bombing Range is a fenced 5,760 acres (23.3 km2) area, with the eastern edge of the range located about 2 miles (3.2 km) west of State Road 19 and the Camp Ocala campgrounds, and one-half mile (800 m) west of the Farles Lake campground. F/A-18 Hornet jet fighters and other aircraft take off from Naval Air Station Jacksonville or from aircraft carriers off the Florida coast, fly low over the forest, and drop their bombs in the middle 450 acres (1.8 km2) of the range. P-3 Orion and P-8 Poseidon aircraft will also use an instrumented range in the southeast quadrant of Lake George to conduct aerial mining training utilizing inert 500lb mines. All air-to-ground exercises using conventional ordnance up to and including 500 pounds (230 kg) MK 82 bombs and five-inch (127 mm) Zuni rockets are authorized. Napalm and High Explosive Incendiary (HEI) are prohibited. Live ordnance is restricted to the Live Ordnance Impact Area; inert ordnance is used on all other targets. Pinecastle targets have also been certified for laser operations. The Navy has used the area for target practice for 50 years under a special use permit from the U.S. Forest Service.

The ghost town of Kerr City is in the forest. It is located on County Road 316 just west of State Road 19.

The Ocala National Forest offers an accommodating climate for year-round recreation. The mild winters are fine for family camping while a summer canoe trip down a palm-lined stream is a cool way to spend an August day. The temperatures for the dry months of November through February range from a daily average of 50 °F (10 °C) to a high of 72 °F (22 °C). The summer season is much warmer and wetter. Short afternoon thundershowers often raise the humidity to about 90% while the temperatures range from 80 °F (27 °C) to 95 °F (35 °C). The average rainfall is approximately 55 inches (1,400 mm) per year.

Water plays an important part in a variety of recreational opportunities in the forest. Activities range from canoeing, boating, fishing, skiing, snorkeling, scuba diving, swimming and the use of personal watercraft. Several boat ramps are available in the forest.

Bicyclists can travel along a challenging 22-mile (35 km) long ride on the Paisley Woods Bicycle Trail. Because this trail is not paved, bicycles need to be suited for rough terrain. Mountain bikes are ideal.

The Ocala National Forest offers many locations to ride Off Road Vehicles. Currently, two trail systems offer a variety of recreation experiences: (1) the Ocala North OHV Trail System offers a longer experience with six distinct trail loops totaling 125 miles (201 km) and (2) the Wandering Wiregrass OHV Trail in the Southeast portion of the forest offers shorter day-use riding with a trail length of 17 miles (27 km). A new trail system was added in 2008 to commemorate the 100th anniversary of the forest. It is part of the south trail system off FR 573.. A small trail 20 miles (32 km) long called the Scrubjay and a longer trail 42 miles (68 km) long called the Centennial may be accessed from trailheads off FR 573, SR 40 and the Big Scrub Campground. There are areas that are restricted to off road vehicles; a detailed forest map can help provide information on areas open to off road vehicles.

There are many trails for horseback riding in the forest. Forest riding trails are actually old roads 6 to 8 feet (1.8 to 2.4 m) wide, marked at intervals with painted spots – called blazes – on the trees. Some of the best trails include the One Hundred Mile trail and the LAM trail.

The Ocala National Forest is a wildlife management area, in which hunting and fishing activities are managed by the Florida Fish and Wildlife Conservation Commission. A permit is required for all hunters (except those indicated as exempt) to hunt in this area. A Quota Hunt Permit may also be required during certain time periods or certain game.

The following is a list of lakes in or on the border of the forest: 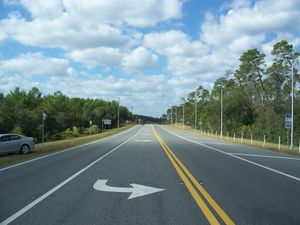 Intersection of State Roads 19 and 40

There are four officially designated wilderness areas lying within Ocala National Forest that are part of the National Wilderness Preservation System.